Last year I had my first Christmas in Prague. This year was almost the same, thanks to the coronavirus : a.k.a. the worst thing to happen to Christmas since Herod (with the possible exception of that ghastly Last Christmas song).

Over on Decoherency, I've speculated that I'd be an excellent candidate for long-duration space flight provided all my creature comforts were met. Lockdowns ? Bring 'em on ! I never wanted to go outside anyway - it's big and and scary, doesn't have Netflix, and your tea gets cold far too quickly. Being told not to go anywhere and be as introverted as possible is like announcing that we can all now live in some glorious blanket-based Utopia of snuggly goodness.

Well, at long last I think I've begun to reach a limit, at which point isolation is now something to be, if not actually shunned, then at least sometimes endured rather cherished.

For various reasons, this year we decided that I would go back to Cardiff for the couple of weeks immediately preceding Christmas, then return to Prague for the event itself. This means I get to see my family and Shirley doesn't spend Christmas alone, and we don't embark on the epic voyage needed to transport the dogs - which would mean a lot of train time in a host of a Covid-ravaged wastelands. Which was a very reasonable compromise, as we don't want to pass on Covid to the nearest and dearest who might be more vulnerable than ourselves.

Knowing what to expect from the travelling, and with rules being much the same as for my August jaunt, this was infinitely less stressful, and was even back to something closely resembling the previously casual status that international travel had obtained. The airport was again empty (though not quite so empty as before), the queues negligible, and the necessity for everyone to have pre-departure tests I found very reassuring. So no issues there at all. Plus, I left in the snow, so I got some marvellous aeroplane views of Europe in winter. 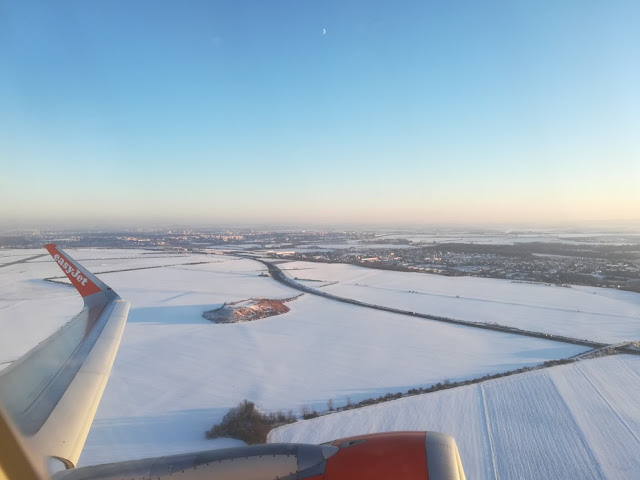 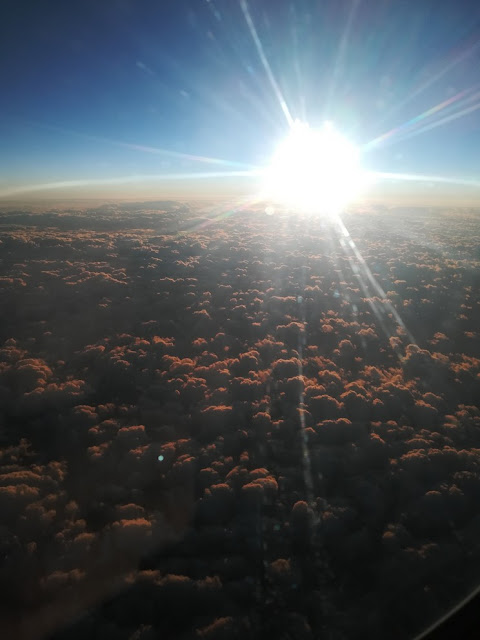 With EasyJet operating again, mercifully I did not have to do a seven hour bus trip from Stansted either, instead getting a short bus/train combo from Bristol. This was entirely without incident. The train was neither empty nor busy, and as it was only a 50 minute trip, I didn't feel too bad about this.

The major change to travel from last time was that in addition to the pre-departure test, you now need a post-arrival test on or before day 2. The good thing about this is that you can use private suppliers, which were half the cost of the public one I had to use last time. The downside is that you have to self-isolate until you get the results back.

Now last time I discovered that actually the rapidly-changing, location-varying rules in the UK really are stressful if you have to actually go through the process yourself, even if on paper they seem simple enough - it's the variation that causes the worry, not the rules themselves. This time I realised that "self-isolating until you get a negative test" is indeed a burden, and not (entirely) something that brainless morons are whining about due to excessive privilege.

In my case this took nigh-on six days because the test (which I took on day 1) got delivered to the wrong address, and then, despite Royal Mail's claims to the contrary, was only very slowly re-routed to its proper destination.

(Because of weird holiday arrangements, and having not much else to do, I actually got a fair bit of work done in this period. And I even gave a short talk on data visualisation, since some of my work was featured in this online "experimental photography" exhibition - you can view it here, or hear the talk here. I guess that means I'm an artist now, woohoo !)

This was hardly stressful, but it did get irritating. Honestly I'm not really sure what the point of post-arrival tests is. Pre-departure ones make complete sense*, since you're ramming a bunch of people into an enclosed space for a protracted period. But then you're allowed to galivant around the country willy-nilly on public transport, so what benefit taking another test is I'm not sure**. Moreover, after quite a bit of digging I discovered that the positivity rates for post-arrival tests is typically a few percent or less even from high risk countries, thanks to the pre-departure tests and vaccination. So to me this feels like unnecessary discrimination against travel (no other event requires post testing), though had I got the result back in even three days instead of six, I probably wouldn't have minded very much.

* And they still do. The government's decision not to require these any more is just stupid.

** I only took 1.5 hours to reach my destination, but other people might easily spend six or more in public transport. And even when you do reach your destination, self-isolation is especially problematic. How many people are really, properly self-isolating at their address ? Not many, I should think, because it's just not practical.

I say it wasn't stressful, and it wasn't. But I could clearly see how actually, being forced to remain inside the entire time is quite different from being allowed out even once a day for exercise. This felt very different even compared to the harshest of lockdowns, and a few weeks of this and I would in fact go properly mad. Not even from a desire to see other people, but just the need to avoid the same four walls and not to feel my legs withering away beneath me became quite trying.

The UK's approach here seems to be an unfortunate middle ground that combines the worst of both worlds : all the hassle of self-isolation, but not enough to effectively stop the spread of incoming variants as New Zealand have managed. Covid, it seems, is very much a "go big or go home" affair, and this middling approach isn't good for much. I'm not against post-arrival tests per se (and pre-departure tests are a no-brainer), I just think that this particular implementation doesn't accomplish anything useful.

What did start to make me a little bit worried was that the test result rapidly approached one of the main activities I had planned. My three goals for the trip were to see my family, to walk my dog, and see my closest friends for a substitute Christmas Eve party. We cut it pretty fine for the latter, but made it in the end - everyone doing a lateral flow test beforehand. So alcohol was consumed in great quantities, even more, perhaps, than the amount of food which was mercilessly devoured. Games were played. Presents were given. It felt almost normal. 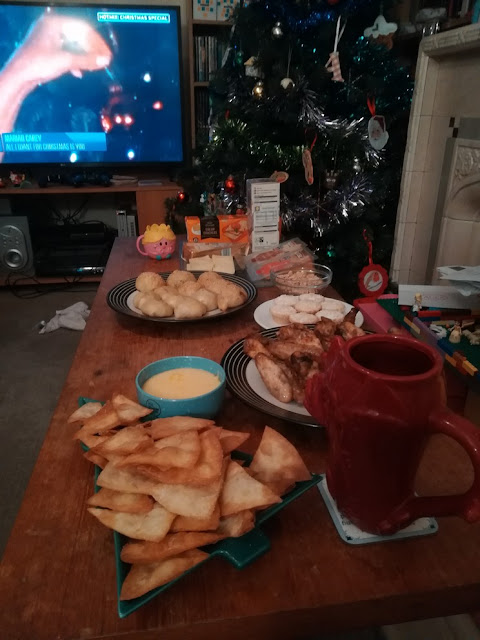 This being done, I continued with the goal of incessantly walking the dog. This featured some of the nicest weather I've ever seen locally : 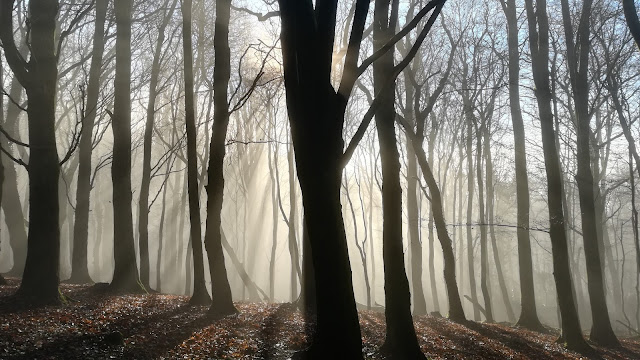 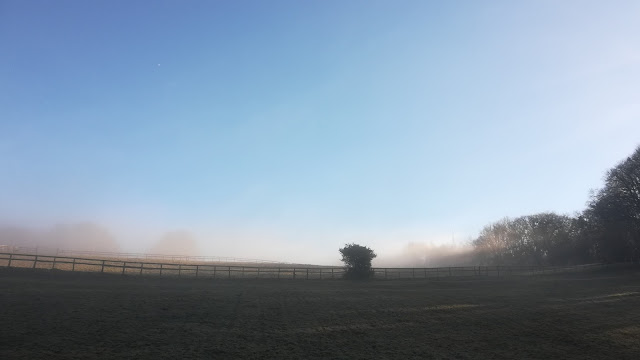 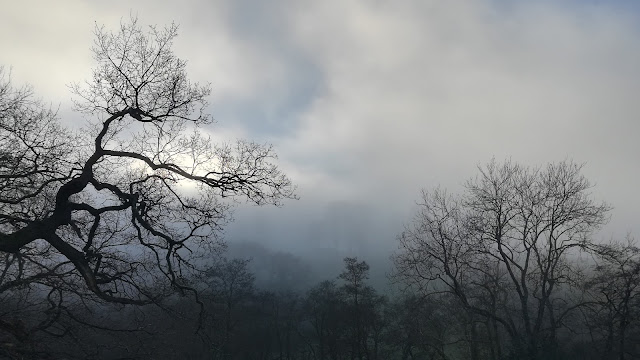 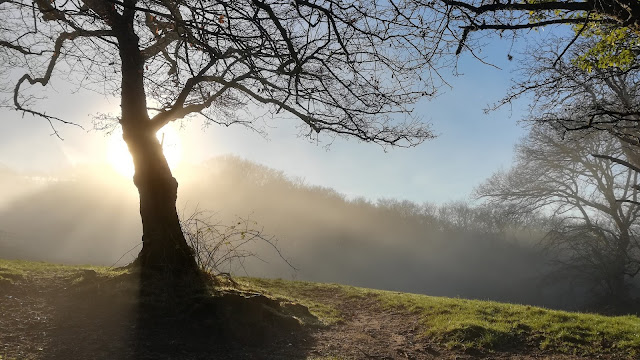 Finally, we had a second substitute Christmas dinner with my family, and again, consumed enough food to get me on Live Aid's hate list : 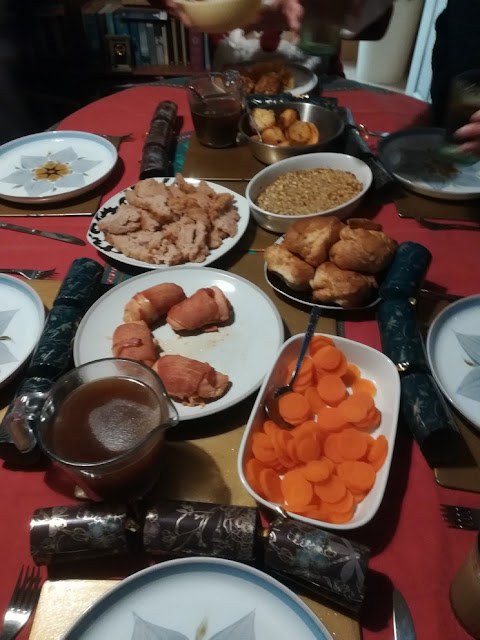 And then it was back to Prague, via the emptiest train I've ever seen : 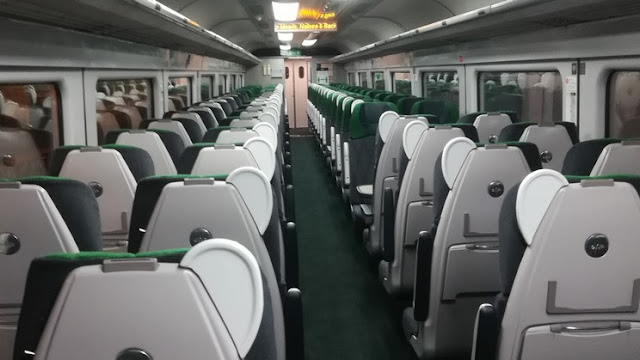 So again I didn't feel terribly worried by the travel. As in lockdown, ironically so few people were now present that the few who did venture out anywhere were now perfectly safe.

In Prague, Christmas was lovely. There was yet more - oh so much more ! food and alcohol and games, and Christmas specials and movies galore. And... it was white. 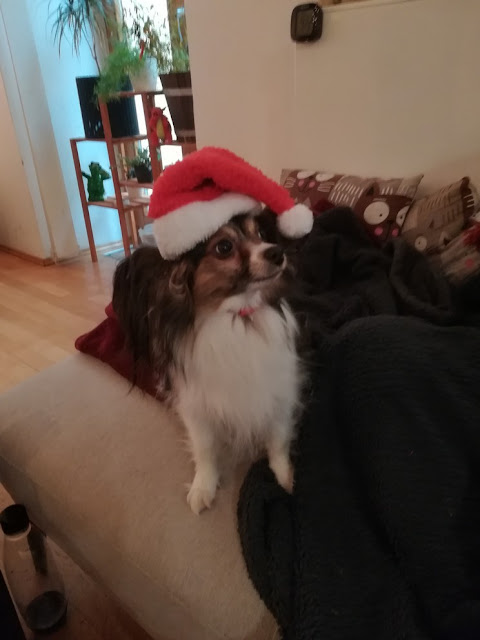 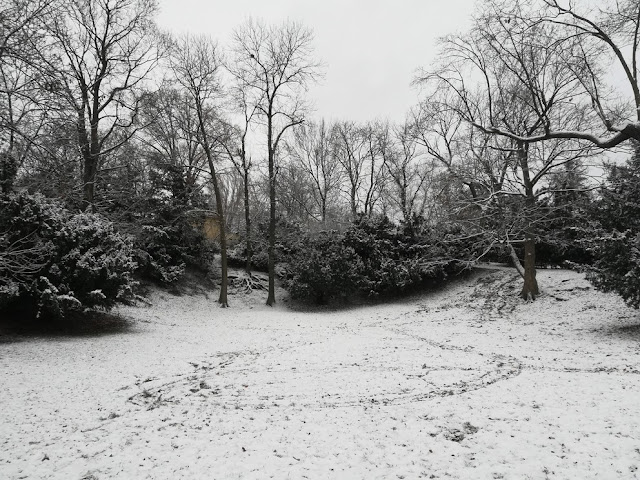 Which meant Christmas was indeed about as good as it could possibly be. Yes, we had to delay taking the dogs to Wales again, but perhaps in the spring...

And yet, I have to say that the pandemic is finally really hitting home on a directly personal level. Fully four people I know who had been double-boosted have simultaneously and independently caught Covid. While until now I've been in a state of more abstract dismay on behalf of the world in general*, and I still don't really worry about catching Covid as being of any direct risk to me, nonetheless I do feel increasingly anxious - or at least hypochondriac.

Let me be clear that I'm acutely aware this is preposterous. It's not a rational thing at all. I had an absolutely lovely Christmas and it was a major boost to be back home again. Alas, this doesn't help prevent me feeling - on occasion - intensely nervous.

Some examples. A tiny patch of dry skin on my hand and suddenly I've got AIDS, or cancer, or Ebola - at least two of these would, realistically, require the intervention of a magical malevolent wizard. A spot of mild light-headedness and I must surely be about to collapse due to low blood pressure. The smallest of pimples and I'm about to break out in hives. Any sort of ache whatsoever must surely be indicative of something, despite that fact the probability is overwhelming that it isn't. Having at least an appreciation for the basics of Bayesian reasoning is, unfortunately, nowhere near enough to combat the irrationally frequentist brain*.

* Though, this is not to pronounce judgement on either philosophy, which I shall leave for another time.

(It doesn't help that I appear to be the last person left in my research group who hasn't caught Covid, which is perhaps fuelling an unconscious and bizarre belief that I must surely have something else instead.)

These concerns are indirect and obviously silly. But being confined all the time makes it very hard not to sink into absurd, destructive levels of introspection (not the same as, but not dissimilar to, an intense case of the spotlight effect), or worse, consulting Doctor Google - who invariably forecasts doom, or uselessly suggests an immediate trip to an actual doctor for the slightest abnormality. And not having other people around to talk to certainly doesn't help. Without other people to remind us of what are perfectly normal physiological variations, it's all too easy to focus on the most trivial imperfections as being a foretaste of cataclysm. Likewise, the relentless focus on the news regarding health, ironically, makes it all to easy to get stressed out by worrying about health, in a particularly vicious cycle.

Obviously, I'm aware that I'm in gilded cage, and that countless millions have it far worse than me. But, while you certainly shouldn't think that I'm a nervous wreck, still the irrational part of the brain is definitely and quite noticeably nagging me about minutiae. Perhaps I could only manage the nine-month trip to Mars rather than the multi-year trip to Jupiter after all...

I've still no desire to rush back to the office five times a week, still less back to the nightclubs. But post-Omicron (other calamities notwithstanding), I might be a bit more eager to avoid living in submarine-like conditions of isolation, even if said submarine is incredibly comfy. After all, as Terry Pratchett put it in Men At Arms :

Individuals aren't naturally paid-up members of the human race, except biologically. They need to be bounced around by the Brownian motion of society, which is a mechanism by which human beings constantly remind each other that they are... well... human beings.