The Best Phone Call IN THE WORLD !

Most readers will be aware that I recently went on one of my necessary-for-sanity trips back to Britain. I returned via a Star Trek conference in London, of which I expect I'll have more to say at some point. Unfortunately, the journey did not quite go according to plan.

The last trip I went on was an epic expedition to Socorro and Anchorage, and I've already related the horrors of that particular journey. Travel wise, things weren't anywhere near that bad this time. I got on a train from Horsahm to London and then Heathrow without incident. The plane to JFK wasn't much fun - it was full and the seats were unusually small, so I was literally elbow to elbow with my fellow cattle (I mean, passengers) for 7 hours. On the other hand, that's an hour less than I was expecting, which was nice.

I arrived in JFK on time with 4.5 hours until the flight to San Juan. Even so, since I had a connecting flight, I was able to skip the huge immigration line and go to this new-fangled "Quick Connect" thing that no-one else has ever heard of, and I was inside the airport in about 10 minutes. If you've ever been through US customs and immigration, you'll know that this is no small achievement.

Then I remembered that the spaceship Enterprise had been moved to JFK - literally, a real-life spaceship called Enterprise. The first space shuttle. It even features in the opening credits of the Star Trek series of the same name, which may well be the coolest possible way to break the fourth wall.


Since I now had several unexpectedly free hours, I wandered around the airport for a while hoping to find it. I didn't, because (as I half-suspected) it was quickly moved from the airport to a museum. Which is a pity, because riding atop a space shuttle called Enterprise would have been the perfect way to outdo my friend's efforts to fondle Kate Mulgrew while the Star Trek convention continued without me.


No matter. I got on the next plane, wherein being awake for over 20 hours began to take its toll. It wasn't as squashed as the first one, thankfully. So a little under 4 hours later I staggered off the plane and collapsed into a pre-arranged taxi. About 2 hours later I found myself back at my little orange concrete bunker, and only then did I realise I was now devoid of such essentials as my coat and wallet.


This turn of events caused me some level of distress. Normally, I'm so ultra-paranoid about checking I have all my belongings that losing any just can't happen. I check the pocket on the back of the seat in front of me at least 5 times. Even when I know full well I never put anything in it. I check for the essentials of keys, wallet and mp3 player in such a repetitive fashion that an anthropologist once wrote a paper on my ritualistic habits*.

* This isn't literally true. In fact, it isn't true at all.

This time the paranoia must have created a peculiar brand of self-confidence. Knowing that I'm too unsure of myself, I knew I must have already checked that I'd got all my stuff, because that's what I always do. So I proceeded from the airport safe in the knowledge that I was far too worried about leaving my stuff behind to have left any of my stuff behind.

Fortunately, though one rather major thing had gone horribly wrong, absolutely everything else was going right. The taxi driver is familiar with the observatory and nice enough to defer payment, knowing that I'm not attempting any scam. But I did have a thoroughly miserable 30 minutes while I struggled with second-guessing myself as to how I could have lost it. I concluded that it was probably on the last aircraft, but I wasn't sure.

Then I got a phone call.

Even better, I had indeed left it on the plane to Puerto Rico, and it sounded like (from the remainder of the conversation, after we'd sorted out the family planning) everything was intact. Though I'd have to pay to get it Fed-Exed to me, this wasn't necessary, as by an extraordinarily unlikely coincidence I was planning to be back in San Juan anyway two days later (for a mini-conference I will describe later).

And indeed, I was back in San Juan two days later, where I retrieved my wallet which contained absolutely everything it was supposed to contain. Then everyone was happy and there were rainbows and kittens and sunshine and lollipops and all other wonderful things. 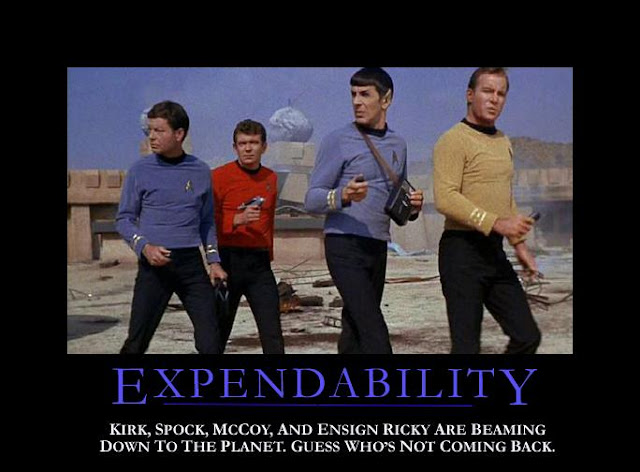 All in all, season 1 leads me to conclude that the good name of Captain James R / T Kirk (it's R in an early episode, then changes to T later on) has been sullied by later parodies. A violent womaniser happy to see his men fall in the line of duty ? Hardly. He's a worrying bureaucratic gentleman, devoted to his crew and mission of peaceful exploration. Ensign Ricky need not fear for his insurance premiums in season 1. Of course, whether all this lasts into season 2 remains to be seen...
Posted by Rhysy at Wednesday, October 24, 2012 No comments: