I recently described how contemporary British politics is quite a lot like the Batman movies. It's also strikingly similar to, if not quite identical, the Star Wars Saga. Behold...

A young, talented, but very annoying politician (Nick "Anakin" Clegg) is languishing on the political desert planet of Sheffield. He has few ambitions until his wise old mentor Menzies "Qui Gon" Campbell is struck down by the forces of Darth Resignation. Vowing to make politics more interesting, he embarks on an epic quest to become a politician in a land far, far away : Westminster.


There he proceeds to rapidly annoy the ruling Labour Council, the well-meaning but corrupt and misguided guardians of peace... no... justice... not so much..., ok, well-meaning guardians of the Constitutional Monarchy for half a generation. Slowly he is corrupted by the evil forces of Darth Cameron, a Sith Lord who has deceived everyone into thinking he's not all that bad. But grandmaster Charles Yoda, lurking quietly in the background, isn't fooled, and soon conflict is inevitable.
﻿

Soon Anakin is completely under the thrall of Darth Cameron and proceeds to the Liberal Democrat Temple (Sheffield University) where he massively increases all the Youngling's tuition fees. The slaughter is terrible. Not even Yoda can stop the Emperor, which makes a lot of sense considering his insurmountable drinking problem. 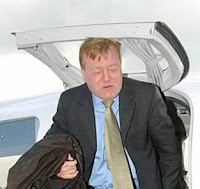 But soon the rest of his party become rapidly disillusioned and form the Labour-Democrat Rebel Alliance. The battle is hard-fought. The Coalition Empire grows rapidly, and eventually constructs a policy of such awesome oppresive power than it could obliterate the entire deficit (powered by a set of massive nuclear reactors). "That's no moon," says general Alan Wan Johnson Kenobi, "it's a tax hike."

(Its first target is the peaceful yet poverty stricken Film Council, leaving the much richer Banking Clan strangely untouched.)

Unfortunately for our plucky underdogs, Kenobi is killed soon after investigating this monstrous weapon. For reasons that are entirely unclear, he chooses an apparently needless self-sacrifce, saying only that, "You can't win Darth. If you strike me down you shall become less powerful than I can possibly imagine." 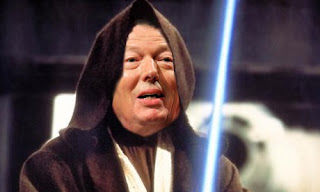 The Rebel Alliance make significant gains against the Empire, ridiculing their massive tax station with small, highly adjustable attack policies. But they are unable to break the power of Emperor Cameron. Eventually they unexpectedly marshall their entire forces under the leadership of hideous Admiral Ed Milliband Ackbar. Alas the Emperor has regrouped his remaining minions and constructed a new and even deadlier tax hike ("It's a trap ! We can't repel policies of this magnitude !" says Ackbar).
﻿

Their only hope is a strike force led by a cool token black dude from the distant planet of America : President Barrack Kalrisian. But then they stumble upon an unexpected ally : not all of the Younglings are dead after all. Bereft of tuition fees they have degenerated into small, unintelligent furry creatures, who are happy to fight the Coalition with anything to hand, but mostly fire extinguishers.
﻿
﻿
The strike team and the student Ewoks buy the Alliance a little time to formulate a coherent set of policies with which to fight the machinations of the Empire, but all the while Liberal Democrats are dropping like flies as their cherished policies are destroyed. Finally, at the bitter end, Darth Clegg cannot stand to see the evil Emperor destroying his beloved party. He turns on his mentor, throwing him into a hated nuclear reactor, ending the madness forever. And then their are wild parties in the form of the Olympic Games, and Ewok students everywhere dance around madly until the credits roll.
Posted by Rhysy at Saturday, January 22, 2011