Physicists in the Caribbean

To begin with stating the bleedin' obvious, I've already mentioned physicists many times. What I have not mentioned is the Caribbean, except in the implicit way that it's a big blue watery thing surrounding the island. I think I may have set some kind of terrible, ultra-geeky record by being here 16 weeks and not, until now, having visited the beach. This fact has been rightly greeted with universal disapproval, except by the locals, who rarely bother to go at all.

I've nothing against beaches. But UK beaches offer a choice of sitting on the sand, or sitting on the rocks. You can, of course, paddle, but swimming is for about 10 months of the year something you should only do if you're totally delusional or have lost all feeling on account of a nasty case of leprosy. Consequently, the prospect of a visit to the beach instinctively instills in me a sort of apathetic dread.

However, the Caribbean offers the prospect not only of swimming, but also having something to look at while swimming. The cold green dark murk that is the north Atlantic is replaced with a strange, warm transparent substance, the kind that can only be found in Britain in expensive tropical fish tanks.  Creatures - some call them "fish", I think - that would otherwise require a setup that ordinarily only a James Bond villain could afford can be found swimming around as though they own the place. Which, in fact, they do, because  the locals rarely visit the beach so miles of deserted sand are the norm. 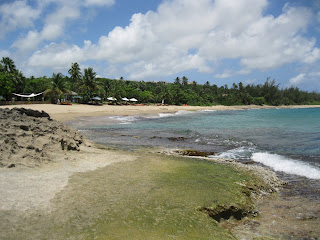 OK, not deserted. I lied about that bit, but I couldn't think of a good word for "having the population density of Alaska". But put it this way - unlike any British beach, you won't have a problem finding a space. Ever. Good frakin' grief, should a Puerto Rican ever visit a British beach, they'd probably die of sheer anger. The idea you might have to pay in a car park for a few square metres of sand with something approaching ice to swim in would probably cause them to shoot a whole a lot of people, judging by the murder rate here. 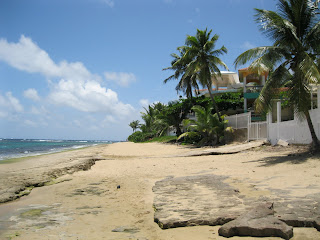 In the course of this expedition I learned two valuable lessons :
1) I am the world's worst snorkeler, able to consume the equivalent of the Caspian sea no matter how well-fitting the gear, along with enough salt to... umm....  do really salty things.... yes... that'll do
2) "Enough suncream" is not even an oxymoron. It is a purely abstract concept, a Platonic ideal if you will, it certainly cannot actually be achieved in reality. Hence I now resemble a sort of lobster-human hybrid, except without the protective armour and longevity of the lobster. Or its underwater breathing capability. Basically I've been given all the negative aspects of lobserity, namely, being quite red. But not in the photographs, mercifully.