I've just finished re-watching Battlestar Galactica for the second time, and Star Trek : The Next Generation for the ten millionth time. They're both very, very good shows and I've no doubt I'll watch them both again. And again. And again and again, eventually. Now it must be said that while BSG is far superior in terms of special effects, plot, dialogue, acting, storytelling, character development, political intrigue, costume design, sound quality, lighting, props, sets, hairdressing, and cinematography, TNG will always be the better show.

To be more specific, in terms of political drama BSG kicks donkeys. That's because it is a political drama. One that just happens to involve mystical forces in space with explosions and killer robots, which are pretty much guaranteed to improve anything. 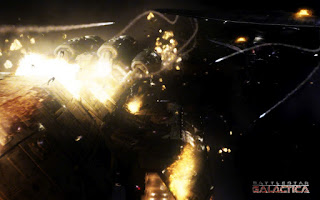 Trek never tried or even considered being a commentary on contemporary American politics. Where it exceeds BSG is as a science fiction show. That's because it's got actual fictional science in it. Like phasers and photon torpedoes and warp drives and holodecks.

Neither show would benefit by gaining what the other lacks. Suppose Saul Tigh decided one day that instead of drinking to solve his problems, he'd go for a chat with Councillor Troy. Or that Gauis "Frakking" Baltar just got on with quietly scanning nebula all day like a good little scientist. Or that Captain Picard, instead of throwing the aliens a buffet reception, decided to shoot them all. Or that Dr Crusher found that treating patients was a waste of time and that she'd rather go and have sex with a nymphomaniac ghost.

Err, well, ok, forget the last two - TNG actually featured both of these. But my point still stands. BSG is no more a science-fiction show than Star Trek is a political drama. In fact, comparing the two on equal terms is a complete waste of time, because it's impossible.

HOWEVER, the underlying psychology of the shows does not escape so lightly.  In fact that's where it gets interesting. While BSG is not really about cool tech in the way that Trek is, technology in the show is conspicuous by its absence. About the only ways in which the human civilisation in BSG is more advanced than our own is the use of FTL and cybernetics (although, importantly, Caprica did remind us that the Colonials were rather further ahead than this before the holocaust).

The story of a great civilisation brought low by its own hubris and arrogant technological prowess is one of the oldest stories of all time. While the Colonials may have once prospered thanks to their advanced tech, ultimately their abuse of that technology becomes self-destructive. In the form of a bunch of angry robots, who were probably sick of having to spend every evening being miserable and alone in their black-painted bedrooms, in accordance with their emo progenitors.

There's nothing wrong with warning about the dangers of abusing technology. But Star Trek showed us what happens if we use it properly. Sure, it didn't come with anything quite as out-and-out cool as a lightsabre, but it did have holodecks, replicators, transporters, force fields and... iPads (they even called them pads, and this was 1993 for heaven's sake). It was also undoubtedly the inspiration for Google's decision to call their phone-based operating system "Android".

While the Enterprise is basically a techie's flying holiday resort, you'd have to be stark raving mad to want to live on the Battlestar Galactica. Terrible food, squalid conditions, highly aggressive (though sexually insatiable) crewmates, and the prospect of a horrible death by killer robots / irate crew members / terrorists / the ship falling apart / summary justice / Adama's steely gaze each and every day. Worst of all, unlike Star Trek, I've never seen a single damn one of them drink any tea*. Actually, that probably explains why they're all so very, very angry. That and the genocide, of course.

* Caprica Six claims she does, once, but I don't trust her, on account of being a psychopathic anorexic killer robot.

What worries me is that Star Trek, by its very nature with a happy-clappy, "YAY TRIBBLES !" attitude, is a proven source of inspiration for legions of today's scientists and engineers. Battlestar Galactica isn't going to inspire anyone, because it doesn't contain a single piece of technology anyone either doesn't already have, or would want to invent. Unless you count - like many strange people - Caprica Six, but if anorexic genocidal robots are your thing then you can keep them to yourself, thanks.

In fact, I'm not so worried about BSG itself any more than I would worry that Yes Minister didn't feature enough zombie dinosaurs with lasers for eyes. What concerns me is the total lack of inspirational sci-fi shows around at the moment. Even Stargate made an attempt to jump on the "oh let's all be incredibly ANGSTY !" bandwagon, which it did with all the masterful control of a sheep trying to herd a bunch of rabid cats.

Perhaps we don't really need science fiction for inspiration, and this meandering rant hasn't achieved anything. All I know is that Star Trek is one of the two reasons I chose my career (the other is that nebula are goddamn pretty), and this is true for a lot of other people as well. Scientists are by no means Trekkies by definition, and vice-versa. And no doubt some scientists became Trek fans after discovering science, rather than the other way around. Just don't come running to me in twenty years when today's young BSG fans grow up and the hordes of angst-ridden robots start nuking the place.
Posted by Rhysy at Saturday, September 01, 2012