A Tale Of Several Cities (III) : AAS in Long Beach

So I've finally recovered enough from a 9,000 mile trip enough to resume writing about it. Humans were never supposed to suddenly flit between 3 completely different time zones in a week, which is yet another reason we should bring back airships without delay. But I digress.

Long Beach was the venue for this year's AAS winter meeting. Two previous attempts for me to attend such a meeting failed spectacularly, but, third time lucky everything went to plan. I wasn't expecting a lot, having repeatedly heard Long Beach (which is basically a glorified suburb of Los Angeles) described as a dump. Which turned out to be very harsh, and having spent my formative years in inner-city Cardiff, I can most definitely tell you what a dump is, and Long Beach is Not It. 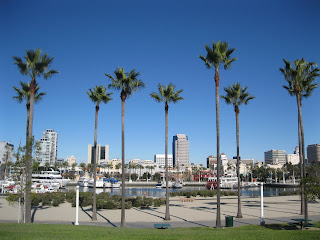 It is, however, a somewhat dull and lifeless place, though that might well be the hotel district in the middle of winter. It's also tremendously spread out, with the LA metropolitan area reputedly larger then the whole of Puerto Rico. And that's just silly.

The AAS meeting itself was indeed considerably larger than the summer meetings, almost too large. Going to every potentially-interesting talk and poster was probably impossible, perhaps because there were almost none of either in the summer meeting. On the other hand, there exists an entirely separate spacetime metric in which one can wander to collect freebies from the various booths without infringing on conference time at all. It's magic.

One thing I saw that I'll plug to a wider audience was Microsoft's World Wide Telescope. Yes. I know, it's Microsoft, the George Lucas of the computing world. They make products which everyone relies on and are a heck of a lot better (for many things) than the competition, but everyone hates them.* 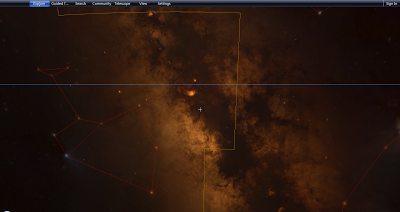 * OK, George Lucas probably deserves it these days, because he's gone mad, but not ten years ago.

The fact of the matter, if you want my opinion (yes I'm aware that's an oxymoron) is that the WWT is a lot like Google Sky, except that it's better because it also includes something equivalent to Celestia. WWT has also done a much better job with the digitized sky survey images than Sky, so what you see out of the box (metaphorically - like Sky, it's free) is a lot prettier (though in fairness, Sky has done better processing on the SDSS images). You also don't get any ugly artifacts at the poles with WWT, and as the image tiles are loaded they fade in gradually, which looks much nicer than the instant replacement that happens in Sky.

I don't know if the 3D mode has quite as many features as Celestia, but it seems pretty capable. One thing it can do out of the box that Celestia can't is to zoom out to show the large-scale structure of the Universe (a phrase that never gets old). It shows a few hundred thousands galaxies, which is pretty fun... though I'm going to add the disclaimer that unlike my ALFALFA Sky video, it only uses a few template images - not 11,000 unique images. Cheats.

Another very cool thing I saw was in the booth of the Thirty Metre Telescope. Instead of bringing along a bulky, fragile model, they'd brought a lightweight, easy-to-pack hologram instead. Much like the plastic holograms that used to feature regularly as free toys in cereal boxes, only much bigger and better. The detail was really quite striking, as was the 3D effect but you'll have to take my word for that. I may have to investigate this further.


I also have to mention the freebies that Arecibo was giving away. Pretty conventional, but popular : stickers, magnets, keychains, etc. We also had two extras this year. First were some special CLAWS stickers. The Cat Lovers of Arecibo Welfare Society was formed over the summer to help care for the on-site cats, which it's done very successfully apart from an unfortunate incident involving a car (no, not my car, actually) which I won't go into here.

I made a CLAWS logo more or less as a reflex action, because it's what I do. Can't help myself. It's based on the old Arecibo logo from the Cornell era. It features LIDAR-car (who uses laser beams to study the atmosphere), planetary radar cat (who explores the solar system) and general astronomy cat (who makes cryptic philosophical comments about the Universe). Unfortunately we only printed 60 of these, which was a mistake because they were gone by Monday lunchtime.

My other contribution was a set of bookmarks used for a public outreach activity. The bookmarks illustrate the life cycles of stars of various masses, with ribbons for children (some of whom turned out to be at least 17) to tie different coloured beads on. Unfortunately, we only had a few groups of school-goers allocated to us, so we didn't really make much of a dent in the 900-strong pile of them we had with us. Thankfully, we got rid of almost all of the rest over the remaining two and a half days, which was nice. A few people even took them in bulk to use for teaching classes. 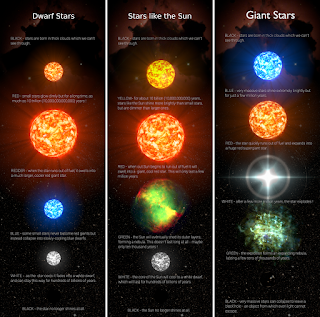 I was able to make the bookmarks in the space of an afternoon, although having made the star model some 9 years back does help, And somewhat gratifying to know that I got a least one useful product out of a hopeless project from such a worryingly long time ago in a city far, far away...

Short of talking about actual science, that about covers it for the AAS. Stay tuned for the final instalment of this thrilling journey, wherein I witness whales, dolphins, a Russian submarine and psuedo-Victorian booth babes wandering around a large old boat.