A while back I reported that you can now buy selected renderings via StockTrek images, which has resulted in me dredging up some very old files and dragging them kicking and screaming into whatever decade we call this (the tens ? the twenty-tens ? the twenty-teens ?). While off galivanting around the UK over Christmas I managed to retrieve some missing files from the almost archaic media of CDs (these files are so old that even CD-writers were pretty new and fancy for home tech at the time).

Last time the re-rendering amounted to little more than some basic texturing and lighting adjustments, which is simple enough. That was also the case for Scorpion-class attack cruiser : The warship dates back to April 2004 and was made for a contest at Scifi-Meshes, taking 4th place. Incidentally it's one of very few absolutely original designs I've made.

The other re-renders are just as old, but were in considerably worse shape. The warship was a single standalone project that took about a month to make, and even back then this allowed for plenty of greebles (small, random details). The satellites from 2001 : A Short Odyssey were made for animation, and although parts of the old models are sufficiently detailed, large parts weren't.

This was driven by two factors : 1) They were part of the classic overly-ambitious crucible of a project that all CG practicioners have to endure, so I didn't want to spend a month on each one; 2) Rendering times had to be kept short with the technology of 2004. Which is not an insignificant difference - multi-core processors were unknown, single-core processors were around the 1 GHz mark, and ray-tracing for free software was pretty much brand spanking new (and so without much in the way of optimisation).

Well, that was then, and this is now. Quad-core processors are the norm, RAM and even GPU memory are measured in gigabytes, ray-tracing has had a decade of refinement, and mesh-modelling tools have improved quite a lot. And, I'd like to think, perhaps I've even learned a thing or two about image composition. For these models, I increased the vertex count by a factor 5-10, so they are essentially entirely new (although some original parts have survived). 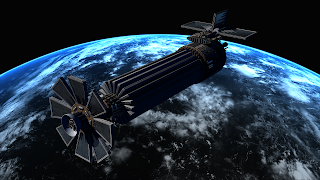 The above is apparently the Chinese satellite featured in 2001. In the movie there is a little Chinese logo just about visible, although I didn't bother with it here. The satellites were originally planned to be orbital weapons platforms . There's really no evidence of this in most of their designs though. At worst, the Chinese satellite looks like it might be able to... umm.... gently nudge an enemy ship ? If it was very lucky ? 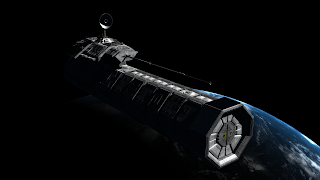 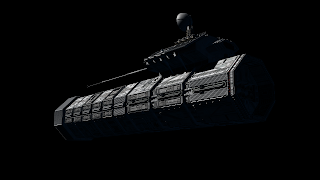 This one is a German satellite, as evidenced by the German flag and even the Iron Cross. It has some long weapon-like protrusion, although exactly what it is is anyone's guess. I rather liked the look of the original design so I tried to follow it quite closely. I was quite pleased with the way the new model turned out, so I also rendered a short flyby animation. It has a little bit of annoying flickering, which is something I'm still trying to fix.

Then we come to the Franco-Bulgarian satellite (the internet tells me it's French or perhaps Bulgarian, so why not). Reference pictures for this were were confusing. Other people's models give it a quite different appearance to mine but I liked my original interpretation well enough. 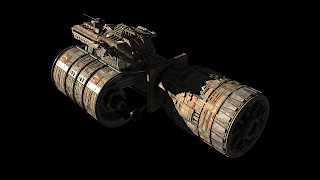 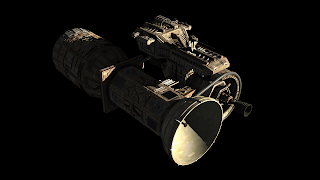 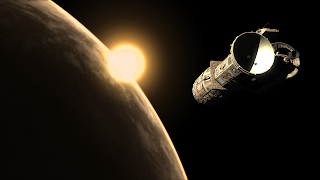 And finally we come to the other satellite, the first one in Kubrick's movie, which is apparently American. I think because at the time, I hadn't ready access to such a nice reference picture, my interpretation came out radically different to the original. Never mind. I think this one came out nicely enough, though I didn't both with a wallpaper image. It seems I really went to town on the greebles on this one, with the upper part of the ship being virtually unchanged in the re-render. 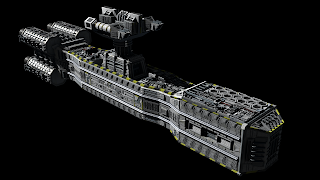 I said finally, didn't I ? I lied. I also decided to render a flyby of all four satellites. Actually, this is just a test. I've got this crazy notion running around in my head that I should do something like this but with all of my spaceships, from the last ten years of modelling. So while this one has only rudimentary camera work and lighting, the finished product will be better.