VY Canis Majoris - Or, Be Afraid. Be Very Afraid.

Recently I came across the following image :

Supposedly it depicts VY Canis Majoris, the largest known star. Not the most massive or the brightest, but the one with the largest diameter - a truly terrifying 1420 times bigger than our own Sun. It's a beautiful and inspirational image by the talented artist Facundo Diaz. But is it accurate ?

The image grabbed my attention, but the properly-cited physical characteristics on Wikipedia are what's really stunning. Other images have tried to put into perspective just how frickin' gargantuan this behemoth is, but I want to tackle this in a slightly different way. The most natural approach to me is to consider what would happen if, somehow, our Sun was magically and instantaneous swapped with VY Canis Majoris.

The result, in a word, is death. Complete and total death. Mercury, Venus, Earth, Mars, the million tiny worlds of the main asteroid belt, and even Jupiter - all gone. Jupiter, in fact, would find itself about 70 million miles below the surface of the star. It's a thought experiment to make Schrodinger's Cat look like the kindest act of animal welfare.

"Surface" in this case is a tricky concept. Although the star is staggeringly vast, it doesn't have all that much mass, considering. It may have a volume 10 billion times greater than the Sun, but its mass is only 17 times greater. That gives it an average density of next to nothing - a thousand times thinner than ordinary air (of course, the interior regions where nuclear fusion is occurring will be very much denser).

Not only is the outer part of the star a pretty good approximation to a vacuum, but the gravity would also be only about a quarter as much as on the surface of the Earth (on the surface of our own Sun, gravity is about 28 times higher than on Earth). And that means that the nice, well-defined spheres in the above images are just wrong. It might be better to think of it as a searingly hot, blinding nebula than a star. It might not even be spherical.

What it definitely would be is utterly spectacular. From the orbit of Saturn, the star would fill half the sky. It would appear less like a star and more like a stupendous flaming wall of fire.


Actually, what it would look like to the naked eye is not much of anything, because it would cause instant blindness. The surface brightness of the star (i.e. how much energy it's putting out per square meter) is about one-sixth that of the Sun, which for all intents and purposes makes no difference. Imagine the Sun filling half the sky, and you get the idea.

In fact it's somewhat worse that that, because the amount of energy received by a luckless "observer" would be about five million Watts per square meter at Saturn - roughly 5,000 times what you get from the Sun on Earth. So there'd be no need to worry about the blindness because there wouldn't be time. The rings of Saturn - if not actually the planet itself - wouldn't last long either.

This means that whether Diaz's wonderful image is accurate or not is a moot point. It would be a sight, quite literally, of such awesome power that no human eye could ever see it.

Moving further out, things get better - slowly - but only because they can't very well get any worse. At the orbit of Uranus, the Star (it deserves a capital letter, and a better name) still absolutely dominates the view. 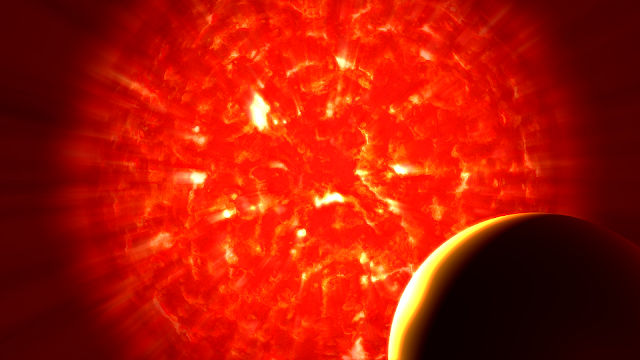 If we move along a planet, we come to Neptune. Now we can start to see that the Star is embedded in a nebula. This isn't surprising, given the insane amount of energy output, the low surface gravity and density - effectively, it's evaporating, wrapping itself in its own death shroud, if you will.


At Pluto, the Star still appears much larger in view than the Sun does from Earth. Just in case I haven't hammered the point home yet, it's absolutely ginagorous. 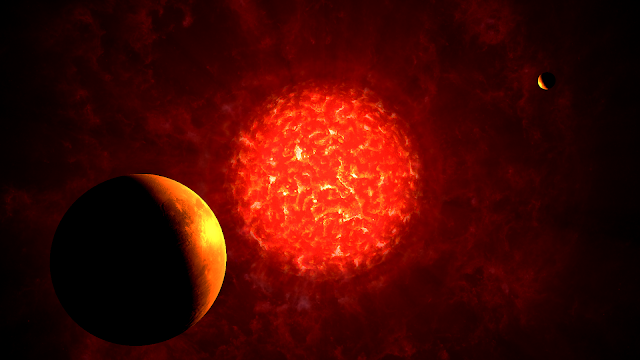 The most distant man-made object is currently the Voyager 1 spacecraft. One hundred and twenty times further away from the Sun than Earth, it's somewhere that can only be described as cold, dark and incredibly lonely. Not so if our puny Sun makes way for YV Canis Majoris. Astonishingly, at this huge distance it would still span 6 degrees. The Sun as seen from Earth spans only 0.5 degrees.