Why Dr Who Shouldn't Be A Guilty Pleasure

I like Dr Who. There, I've said it. And now I'm going to justify that.

One of Battlestar Galactica's greatest features was that there was absolutely no reset button, ever. If something went wrong, it stayed wrong. Main character killed ? That's it, they're dead*. But BSG wasn't really sci-fi. In most genuine sci-fi, as in Star Trek, the rules of the fictional universe may not be quite the same as in the real world, and often they can be circumvented (albeit usually in an interesting way) when they become... inconvenient. Main character killed ? No problem ! Get them cloned, or travel back in time, or hop into a parallel universe where they're still alive, or bring them back as a hologram, or heck, just make them come back to life, etc. etc. etc.

* Except for certain killer robots.

Dr Who is at the very opposite end of the realism spectrum from BSG. There are no rules, only guidelines. Dr Who is to scientific plausibility what 300 is to historical accuracy - sure, there may be some occasional nods in that direction (even some very good ones), but they're nearly irrelevant. This is not a show where plausibility or even believability, let alone possibility, is much of a factor. And while that's what made 300 so stupid I wanted to vomit, somehow it's also what makes Doctor Who great.

Not giving two hoots about scientific accuracy gives the show tremendous creative freedom. The show can endlessly re-invent itself without fundamentally changing. Ghosts ? Planet-sized aliens ? Katherine Jenkins singing songs to flying sharks ? Anything goes. It's essentially an exploration of an infinite universe, where everything that can exist, no matter how ridiculously unlikely, does.

The thing is though, the real universe is full of giraffes, exploding stars, Scarlet Johannson, worlds covered in methane, pandas, stars so dense they slow down time, and cabbage. We can only survive in a minuscule region of space barely five miles thick, on top of a rock hurtling around an almost 100,000 mile-wide ball of plasma, and we think this is normal. Anyone who thinks science fiction is nothing but escapism should have their head shoved into a telescope until they realise just how dreadfully, pitiably small the so-called "real world" is.

And that's one of the principle themes of the show - the idea that exotic is a relative state. If you've lived on a world covered in methane, the idea of just walking to the shops to buy some milk would be unimaginably weird (I lived in a place without streets, which for me was akin to living without trousers - just not natural). Or, as the Doctor would say, "No other race in the galaxy would think to invent edible ball bearings !"

This is actually very important... no, not the edible ball bearings, I mean the morality of the show. Before Stephen Moffat got his hands on it, the Doctor's assistants were by and large ordinary, normal people. Rose is a complete chav. Martha is about as boring as anyone you'll ever meet  And then there's the hugely underrated Donna Noble, a woman whose utter normality is best described by her luckless, reluctant, short-lived fiancé :

"And then I was stuck with a woman who thinks the height of excitement is a new flavour Pringle ! Oh, I had to sit there and listen to all that yap yap yap. Oh, Brad and Angelina, is Posh pregnant, X factor, Atkins diet, feng shui, split ends, text me, text me, text me - dear god, the never-ending fountain of fat, stupid trivia !"

With characteristic lack of subtlety, the Doctor puts it scarcely more politely :
Doctor : Weird. I mean, you're not special, you're not powerful, you're not connected, you're not clever.... you're not important.
Donna : This friend of yours, just before she left, did she punch you in the face ?

Compare this with Star Trek, where we rarely see anyone who isn't the best-of-the-best being allowed to have adventures. 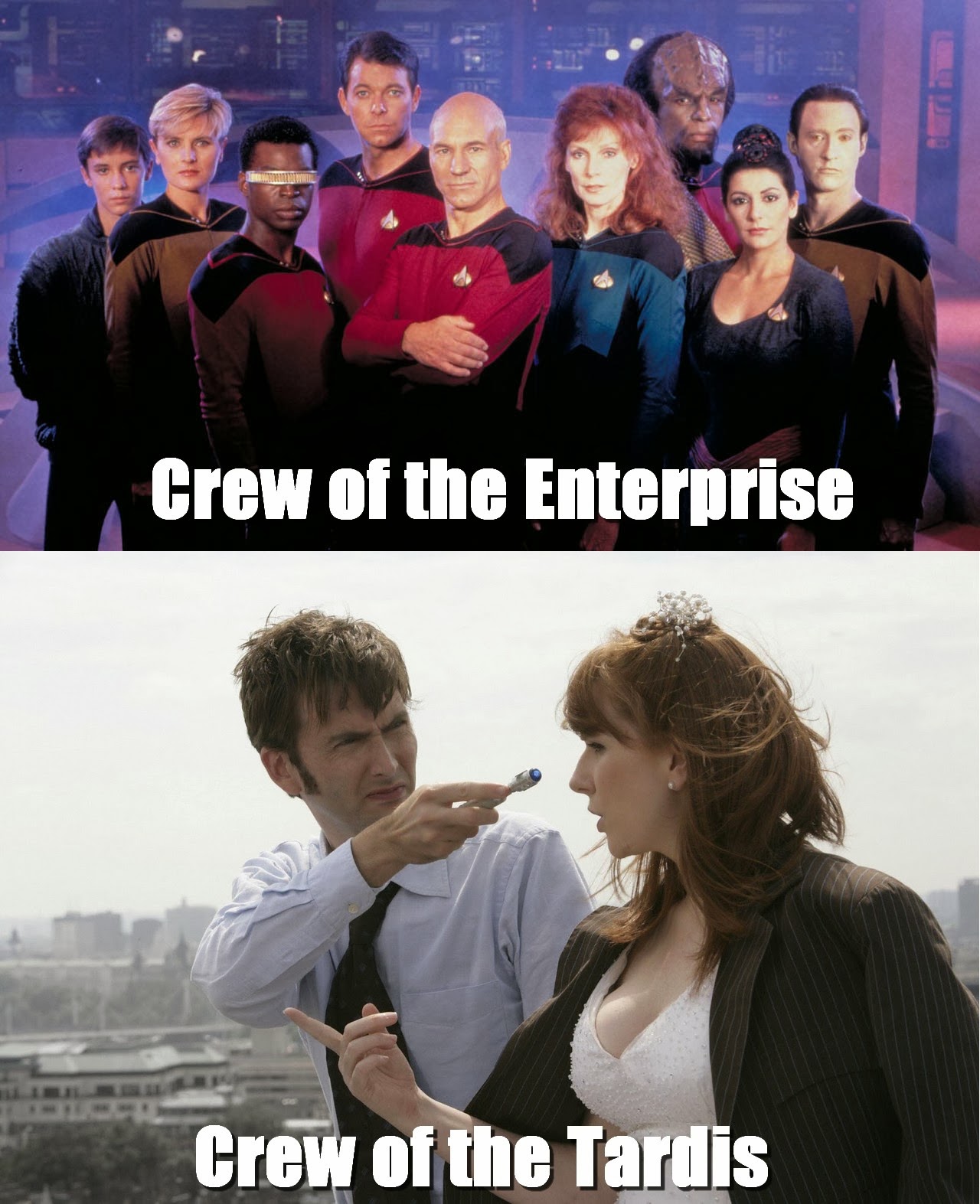 With Donna in particular, we have a genuinely normal person who's not (unlike Martha or Rose) falling head-over-heels for the handsome stranger. Moreover, she's a very strong female character who's not stunningly attractive, something which is worryingly rare in mainstream sci-fi. Jenna Louise Coleman may be awfully nice to look at, but her character is pathetic compared to Donna, who's more than a match for our Gallifrean hero. For example, at her wedding :
Doctor : Hold on, what are you dressed like that for ?
Donna : I'm going tenpin bowling. WHY DO YOU THINK, DUMBO ?
Or, later on :
Doctor: The last time, with Martha, it got complicated. And that was all my fault. I just want a mate.
Donna : You just want to mate ?
Doctor: I just want a mate !
Donna : You're not matin' with me, sunshine !

(As an aside, for more on the Doctor's companions, this article is worth a read. It certainly has a point that too many of the companions are pretty girls, though personally I think most of the article is an overly-harsh assessment. Companions in the Moffat era, however, do have a worrying tendency to have their entire lives defined by the existence of the Doctor, and have almost nothing to offer by themselves. Which only ends up weakening both of them.)

But anyway, rather than being revealed to actually have some sort of uber-epic alter ego all along - as with later companions - Donna (like Rose and Martha and Mickey) becomes important through her own actions. Yes, it takes a little help from an alien in a magic box. The Master calls the Doctor, "the man who makes people better", but he doesn't do this by mystical forces or mind control. Rather, he does it by showing them that there's more to life than they thought, and giving them a chance to demonstrate their own innate abilities. Slowly, they realise that they're not normal and never have been, because there's no such thing - exotic is indeed a relative state.

This tendency to treat the ordinary as extraordinary is complemented by the reliance on the principle that any sufficiently advanced technology is indistinguishable from magic. As a result, Dr Who can often feel closer to magical fantasy iiiiinnnn spppppaaaaace than true sci-fi.  Yet sci-fi it very much is, far more so than BSG. This is exemplified by the episode The Satan Pit. Our suit-wearing hero finds himself confronting a creature claiming to be Devil itself, originating from "before the Universe" : 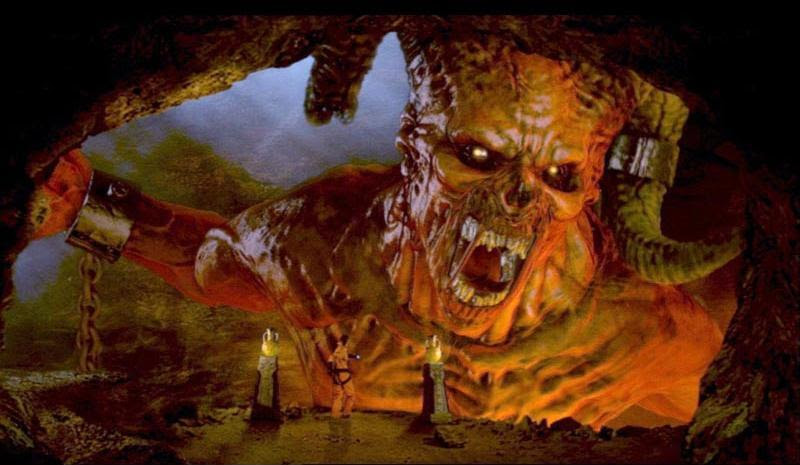 "I believe, I believe I haven't seen everything, I don't know. It's funny, isn't it? The things you make up. The rules. If that thing had said it came from beyond the universe, I'd believe it, but before the universe? Impossible. Doesn't fit my rule. Still, that's why I keep travelling. To be proved wrong. "

Wow. Stuff like this is what makes up for the retarded episodes where the Doctor fights a giant wasp*. Seriously, this is a much misunderstood part of the scientific process. Proving existing theories wrong is what science is for (although this is present in many other si-fi's, it's rare to hear it stated so directly). Well... "wrong" is perhaps an unfair term. "Incomplete" might be better, because theories are by definition well-tested, and in a sense can't really be said to be "wrong", as such.

* Or the one with child acting so bad it'll give you a hernia. Or the one where people's faces get smoothed over but they're still able to breath. Or the ridiculous Slitheen. Sadly, it must be said that Doctor Who suffers from a high number of episodes which are just god-awful. As Donna says so the Doctor, so I say to the writers : "Sometimes you need someone to stop you."

To give an example, take Newton's theory of gravity. Works tremendously well for most aspects of everyday life, like dropping apples. Does a pretty dang good job in the Solar System too. But it's not quite good enough to describe the orbit of Mercury, and it's just not up to scratch for GPS satellites. Einstein's version doesn't have these little problems.

But relativity also does something far more profound than dotting the i's and crossing the t's of Newton's model. You can't use a few grams of matter to flatten a city in Newton's universe, but you can in Einstein's. Even more spectacular are the consequences that we haven't been able to explore yet - relativity allows - in fact, necessitates - time travel. And that's why being wrong can be the most wonderful and terrible thing in the world. Only when forced to let go of your old ideas can you begin to consider new ones.

The Doctor's attitude is resolutely scientific, even when things appear to be flat-out magical. Like any scientist, he's wrong at least as often as he's right, and delights in it. Being wrong doesn't make him give up and believe in magic - it makes him come up with new and better explanations. I contend that  Dr Who is a science fiction show in the sense that it portrays a fictional scientist dealing with - and this is the important bit - fictional science. The Whovian universe may have rules hiding in it somewhere after all - they're just completely different to what we currently think the rules of the real universe are.

But there's more. Beyond the feel-good factor of treating ordinary mortals as important, the show has a morality-tale aspect that hasn't really been seen since Star Trek. The Doctor rarely carries a weapon, abhors guns, and - though he doesn't always succeed - will usually attempt a peaceful solution, sometimes at tremendous cost.
Dalek Emperor : "What are you, Doctor, coward or killer ?"
Doctor : "Coward ! Any day !"

He's also firmly anti-establishment, which I think is pretty darn important in a prime-time family show. The last thing we need is for children to grow up venerating politicians.
Doctor: Don't challenge me, Harriet Jones. 'Cause I'm a completely new man. I could bring down your Government with a single word.
Harriet Jones: You're the most remarkable man I've ever met. But I don't think you're quite capable of that.
Doctor: No, you're right. Not a single word. Just six.

Finally, it also fulfils another vital role that Star Trek pioneered : it challenges social taboos. Science fiction is the ideal vehicle for this, because the audience is already expecting to be shown new ways of living. Star Trek had a black, highly capable female communications officer and the first inter-racial kiss and a Russian at the helm during the Cold War. These are impressive achievements. But it somehow never quite managed to tackle homosexuality, even in Enterprise, which was much the most gung-ho sexy Trek show.

Dr Who features gay characters all the time. They're just thrown in there, being just as heroic and inept as everyone else. In a universe of flying sharks and werewolves, no-one in their right mind would judge anyone by their sexual orientation. Most importantly of all, this is a family show. And you know what's absolutely fantastic about that ? No-one cares ! 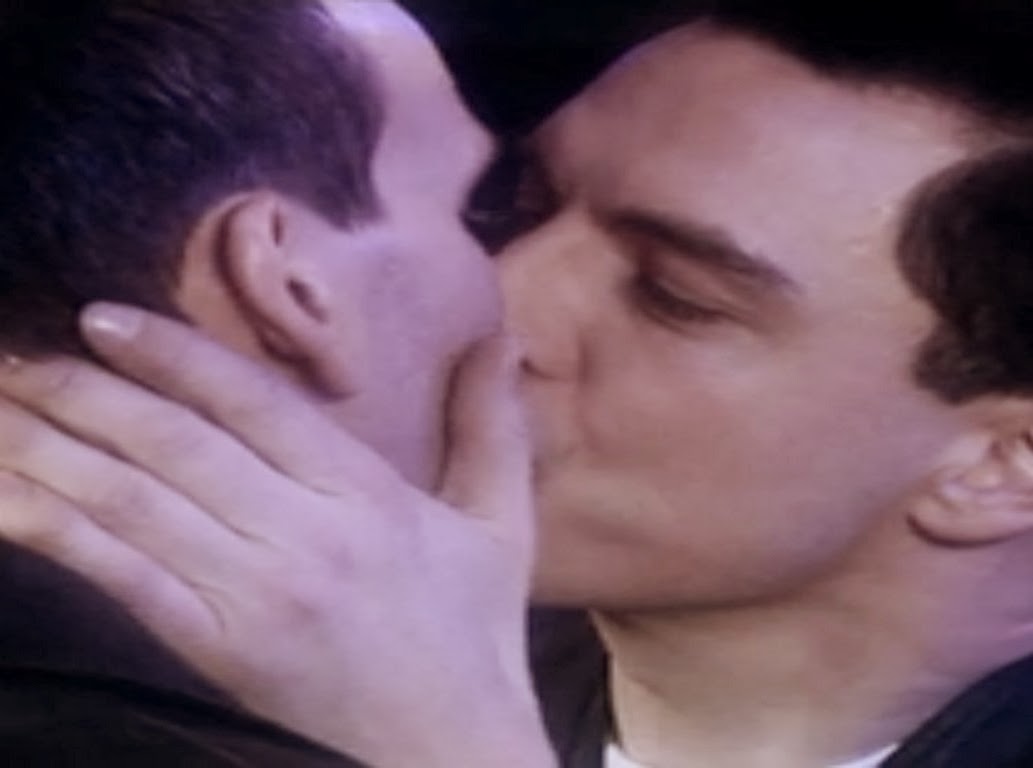 That's what I call social progress. Bravo, Doctor. This is definitely something that deserves to be celebrated. And right now, this should be actively promoted in countries where such matters are still - in defiance of all rhyme and reason - considered taboo, like Russia and Uganda. Showing us in family-friendly way that all people, no matter how chavy, or boring, or feisty, or stunningly good-looking, or gay or straight or just generally all-round curious, or even if they're Kylie Mynogue, that none of these people are ordinary and all equally valuable - that's a message which still matters. Well done, BBC, well done.
Posted by Rhysy at Tuesday, February 04, 2014