The only advantage astrology has over astronomy is that astrologers come up with much better names for things. Whereas astrology gave us constellations with dramatic names like Scorpio and Cassiopeia, modern astronomy has to make do with things like the hugely uninspiring James Webb Space Telescope (who the blazes is James Webb ??), the Very Large Array, and - a masterpiece this one - the Very Large Telescope.


This total lack of imagination isn't confined to telescope-builders but pervades astronomy itself. You can't give galaxies cool names like "Andromeda" any more. Now you've got to call them things like J123402+114319, which is not only boring, but unpronounceable (you can still name asteroids though, which is done in a more-or-less sensible way). Actually this is a serious problem - it makes a lot of papers unreadable :

So it should come as no surprise to learn of the existence of Blue Compact Dwarf galaxies, which I'm calling smurfs for obvious reasons. Smurfs are difficult to spot because they're small and not very bright. Also, unlike their fictional counterparts, they're tremendously boring to look at even if you're more than five years old.

Hunting smurfs if therefore a tedious and hugely unrewarding affair. It's not like you can cook them to brew a magic potion when you find them or anything. In fact, another disadvantage of not being astrologers is that astronomers aren't allowed to use magic, so Gargamel's incantations are forbidden by the Elders of Astronomy. Specifically, writing :

"We describe a sample of 207 Blue Compact Dwarf galaxies which we extracted from the Sloan Digital Sky Survey with the aid of a standard pentagram and chicken sacrifice..."

is precisely the kind of thing the peer-review process is supposed to weed out. Smurf hunting is just not nearly as exciting as you've been led to believe.

Sometimes, though, the smurfs just turn up unexpectedly. Like this one. Like most smurfs, it's not particularly bright, but it isn't particularly dim either. Which just goes to show that all of the automatic routines people have developed for looking at optical data still have room for improvement, particularly as this one was quietly minding its own business in the SDSS data for over two years, and even now doesn't have an SDSS catalogue number.

A stupendously patient student of mine, Hanna Herbst, found this one during the Arecibo summer undergraduate program back in 2011 (we'll get to why it took us so long to publish the data in a moment), looking at neutral hydrogen gas data. Which, I suppose, leaves two options for using this to impress people :
Option A : "I discovered a new galaxy !"
Option B : "I found a really gassy smurf !"
It turns out that smurfs are often very gassy, making them easier to spot by looking for their gas emission instead of normal optical light. That's something which didn't come up much in the cartoon, presumably because an evil wizard hunting a bunch of blue farting dwarfs is too stupid even for infants.

Anyway, as you can see, this galaxy isn't particularly visually stunning. Zoom out in the optical image and you'll see how extremely small and non-descript it really is. 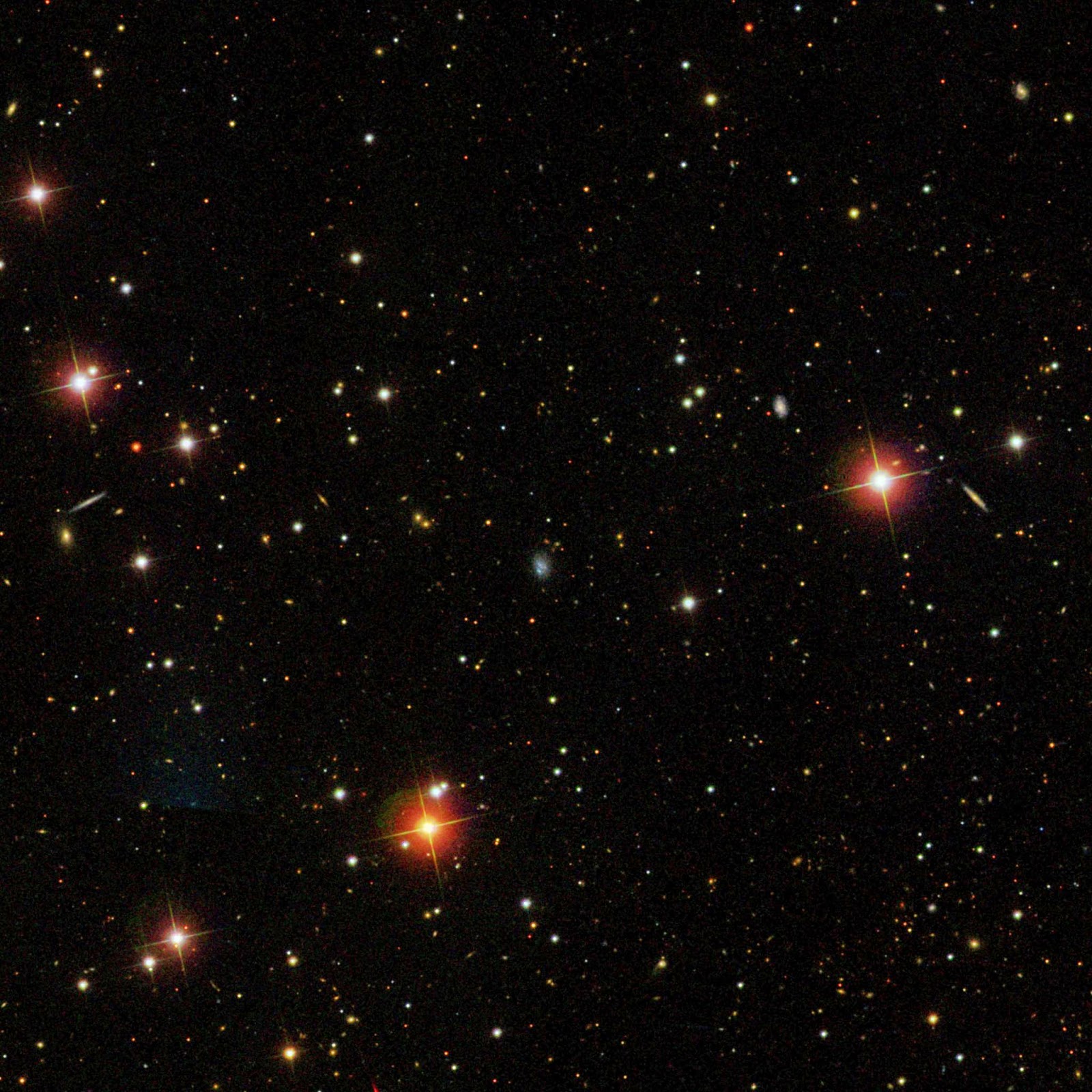 Although it's more visible in the hydrogen data (see below), it still doesn't look like anything to write home about. In any case, the summer was short and there were other things to do, like swimming with sea turtles and publishing my thesis data. Moreover, there's a heck of a lot - and I mean a LOT - more interesting stuff in other parts of the same data set (that paper is submitted but still under review).

Worst of all, though - having spent a long time studying the Virgo Cluster - I utterly failed to recognize that the velocity of this galaxy (a rough proxy for distance) was extremely low : 363 km/s. In clusters, galaxies can be accelerated towards or away from us at speeds of thousands of km/s, which makes measuring their velocity almost useless for determining their distance. Since I was quite used to finding galaxies at these sorts of low velocities, it didn't seem tremendously important.

But this smurf is different. It isn't anywhere near a cluster, or anything else for that matter. It's lonely. Its low velocity can't be because other galaxies around it have accelerated it toward us, because there aren't any. So its low velocity must be because it's at a low distance.

It's so low that potentially it could be in our own Local Group of galaxies - which would be super-awesome. Cosmological models have massive problems predicting how many nearby galaxies we should see, generally coming up with about ten times more than we actually observe. Finding one so close would be very exciting indeed.

In fact, it almost certainly isn't. After correcting for the motions of known Local Group members, and estimating its distance by other methods, we found that it's more likely to be about 25 million light years away (the Local Group is about 3 million light years across). It could be a lot closer, but without a direct distance measurement (this is hard to do) we can't really say any more than that. Probably the most important thing about its discovery is that it was completely missed in the optical data for so long - there could easily be similar but closer galaxies still lurking there, waiting for someone with more sense than me to find them.

On the other hand, the fact that it's so lonely might be more interesting. In standard cosmological models, galaxies grow by merging with other galaxies. Dwarf galaxies are the building blocks of bigger, better galaxies. Just how many survive, especially the lonely isolated ones, is not well-known*. In fact a lot of people have problems with the whole idea of "hierarchical merging" - although we know it definitely happens, exactly how often and how important it is is matter of huge debate.
* Unfortunately there are no catalogues of isolated blue compact dwarf galaxies, which is a shame because that would be pretty much a smurf dating agency.

So our lonely little smurf turns out to be interesting after all, if not nearly as cool as space Nessie. The only question, then, is what to call it. I gave it the unassuming designation of AF7448_001 in the paper, which follows the IAU's boring naming conventions. It could have a popular name as well though. Herbst's Smurf is a bit of a mouthful. Hanna's Smurf is better, although we could really go to extremes and call it Hanna's Smurfoorwerp. Nah. Maybe there's a reason for those boring catalogue designations after all.
Posted by Rhysy at Monday, April 14, 2014