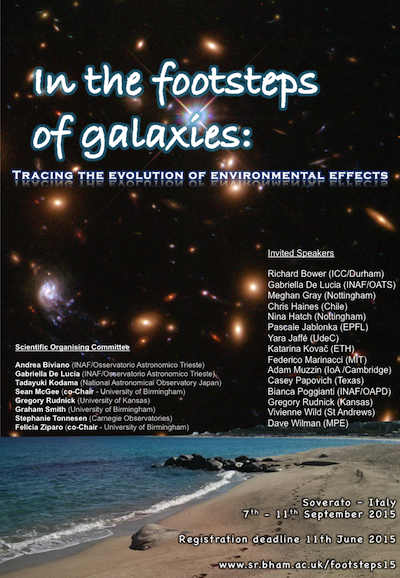 Let Italy boast of her gay gilded waters
Her vines and her bowers and her soft sunny skies
Her sons drinking love from the eyes of her daughters
Where freedom expires amid softness and sighs.

The first twenty minutes or so of "Scotland the Brave" are basically all about mocking the Italians for being a bunch of pansies. Well, I suppose they're just still bitter over the battle of Mons Grapius, Hadrian's Wall, etc. Actually, on arriving in Soverato I quickly realised why the Romans conquered most of Europe whereas the Puerto Ricans have had about as much impact on world affairs as the Scottish : it's really frickin' hot in Italy, but not all the time.

I mean, during the winter months, the ancient Romans probably sat around saying things like, "Seriously guys, remember how awful it was here last summer ? How we all nearly died ? Let's try invading Gaul this year, it's less dangerous." Whereas in Puerto Rico it's like, "nah, it's far too hot to do anything today, let's not do anything tomorrow instead." Much as Britain conquered a quarter of the world in search of better food, so Rome probably expanded just to have a nice cool summer holiday home somewhere up north.

This theory works quite well considering a couple of exceptions that prove the rule : neither Scotland nor Wales bothered conquering England because the weather there is just as bad, which would put us back on a level playing field except that they're bigger than us. 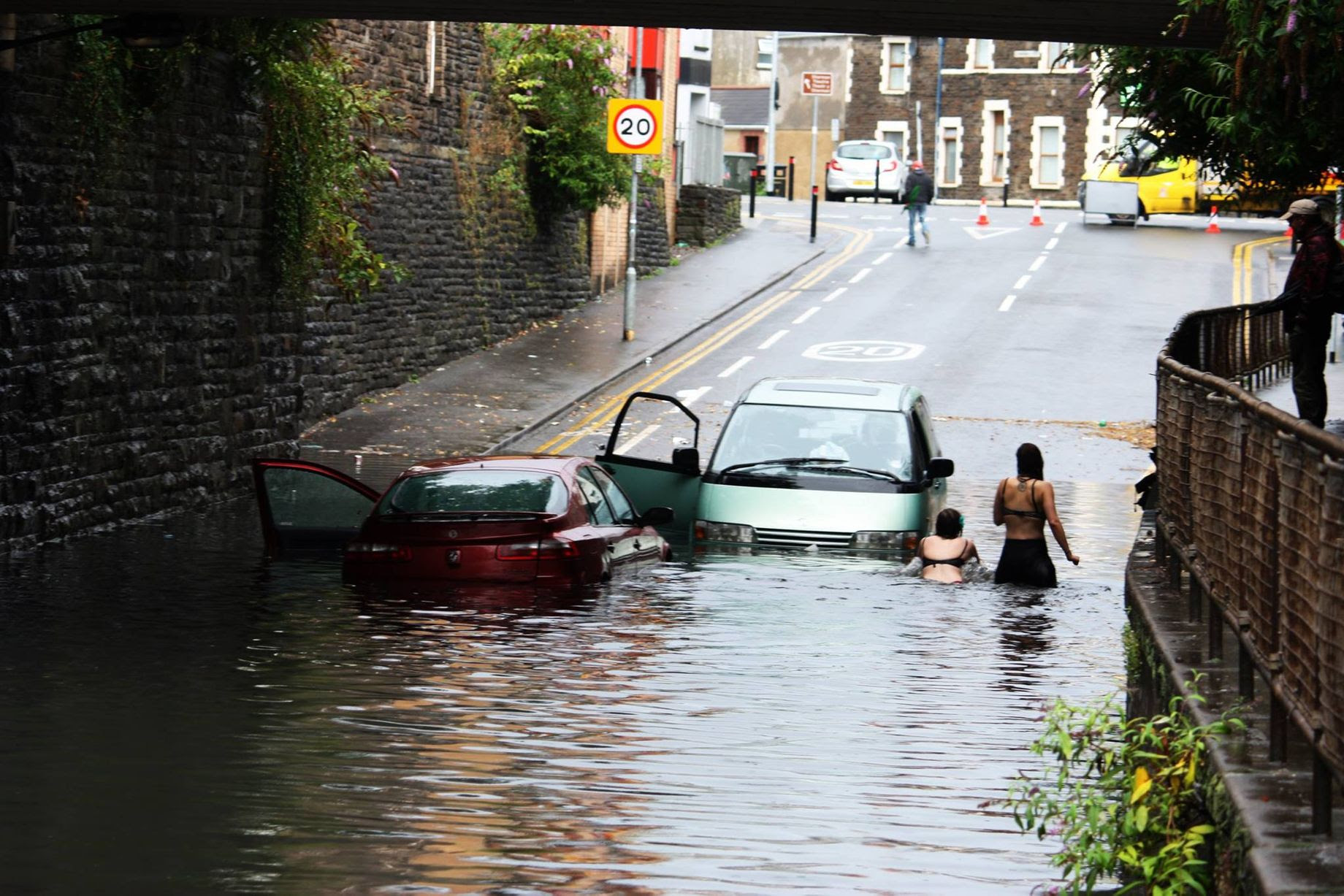 Anyway, for the first two days in Soverato the temperature was 34 C and the humidity level reached Puerto Rican standards, i.e. hell. My flight was delayed so I arrived at about 12:30am and found my hotel (a B&B) was shut. The owner didn't answer my call. So the shuttle bus driver took me to another hotel, which, on reflection, wasn't any better than sleeping on the beach. Worse, probably.

There was no air conditioning. There was a fan, but that provided limited benefits. There was no wi-fi. The shower room was tiny yet somehow contained not only the shower but also a toilet, sink, and bidet. Activating said shower resulted in freezing cold water soaking the entire room instantly because it sprayed water uniformly in all directions. Fortunately, this didn't last long, because it was soon replaced with nice scalding hot water instead. It was by far and away the most bizarre and dreadful shower I've ever encountered. 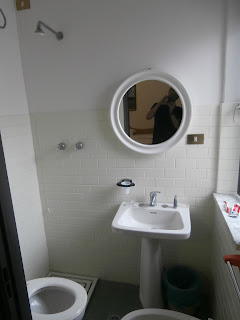 After enduring this freezing, scalding, cramped torture chamber, I discovered that the "double" bed was actually two incredibly saggy single beds stuck together. So uncomfortable was sinking about three feet into the mattress, which provided essentially no support at all, that I ended up lying exactly in the middle, balanced precariously across the two halves in a pose very much like the Vitruvian Man and hoping against hope I'd be able to sleep like this. This particular conference trip was not going according to plan*.

* For the record, I'm told that other rooms in the hotel do have air conditioning and that later they even had wi-fi as well.

Things brightened up the next day. The hotel situation was quickly resolved with some translation (the owner speaking nearly no English) and I moved to my pre-arranged hotel which had air conditioning. But still no wi-fi, which is apparently as rare as gold dust in Soverato. Even the conference venue wi-fi was so poor I resorted to using my phone's expensive roaming 3G access.

Then I swam in the sea and forgot about the internet for a while. The sand at Soverato may be rather coarse but the sea temperature is perfect. It's certainly a natural choice for the University of Birmingham to host a conference, as opposed to, oh I don't know, Birmingham. The conference welcome bag even came with a customised beach towel instead of an umbrella, which would otherwise have been an... optimistic choice for a dreary, rainy city that's 40 miles from the sea. 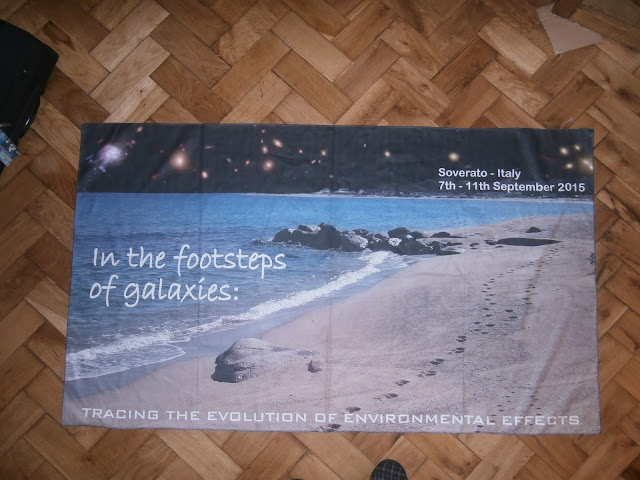 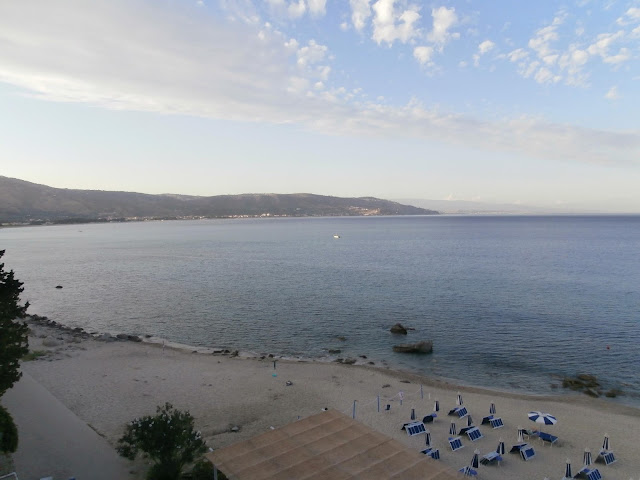 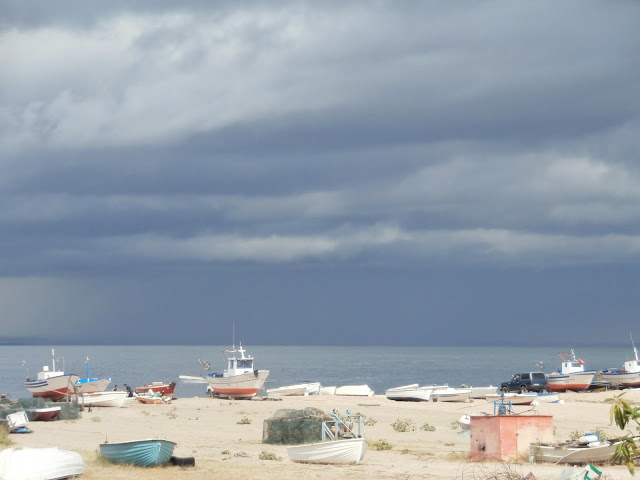 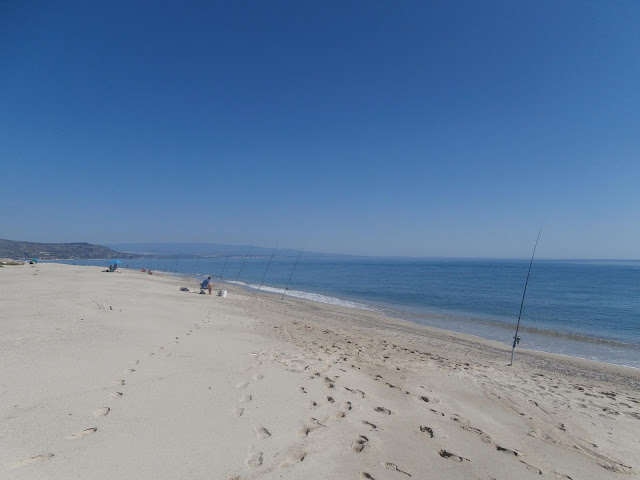 Even the insane humidity didn't last long, unlike Puerto Rico. After a day or two it had dropped to the point where things became quite pleasant, thus explaining why the region was inhabited at all.

As for the conference itself, this was, as usual, a mix of really interesting and really uninteresting presentations (with a bias quite strongly toward the former). With 80 talks, this is inevitable. The worst are people who sound like they're talking about something very interesting but don't have any enthusiasm for speaking about it and yet for some reason they refuse to shut up. And least people who are genuinely unenthusiastic won't bore you to death. People who simply can't convey their enthusiasm are much more dangerous.

Then there are the classic mistakes :
I don't know why people keep doing these things. I suggest a "guideline for authors" section on any conference website.

What the conference organizers did really well were the social events. Tuesday evening featured a free food and wine tasting event with a tour of a 16th century watchtower, from which the Italians hurled down beehives at marauding pirates. "Do we have any bees ?", someone asked. "No", says I, "It's B.Y.O.B."

Well I thought it was funny.

Wednesday was a half-day excursion to Squillace. Since it featured not a single vine, bower, soft sunny sky, let along anyone drinking love from anyone's eyes or anywhere else for that matter, and the waters were neither gay nor gilded, the Scots would have felt right at home.

What it did feature was rain. Lots of rain. I'm sure Squillace is lovely if it's dry, but it wasn't. I think a castle may have been involved at some point, but I couldn't tell because of the rain. I began to think that indeed Birmingham were being optimistic with the beach towel and maybe the umbrella would have been a better choice after all. 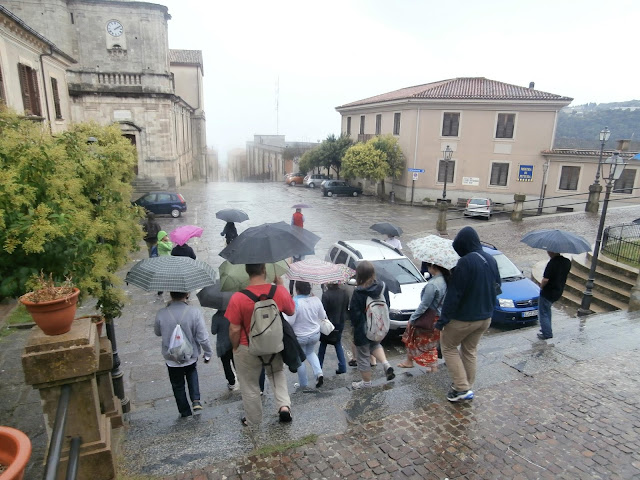 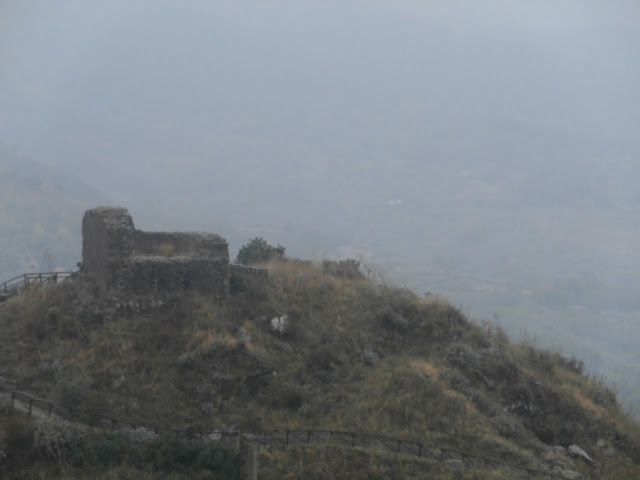 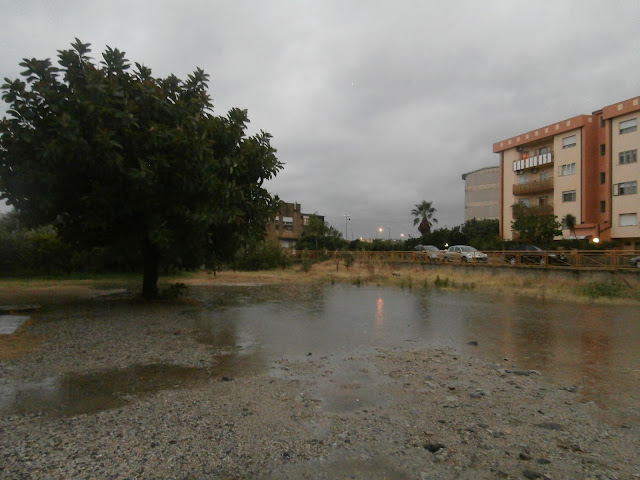 After this soggy and rather miserable sojourn, the trip to the conference dinner didn't begin much better. The bus trip took around 45 minutes (leaving 20 minutes late), then it reached a point where it just stopped. For a full twenty minutes it did nothing except move very slightly back and forth, seemingly in an effort to orient itself very precisely with the bus in front, then it would shift out of position and begin again. We didn't actually have any net motion forwards of backwards, we just sat there shuffling around for no reason whatsoever.

Then, without warning, we got onto a smaller shuttle bus to take us down the road that was too steep and windy for the larger bus. It would probably have only been a five or ten minute walk to the restaurant, though it was still raining heavily. It would have been a lot better if the bus had stayed still though.

The meal itself compensated a hundredfold for enduring hours of walking around in the rain. I have never eaten so much food in my life, and I sincerely hope never to do so again. Several local species probably went extinct that night, but rest assured they died a good and worthy death. Six. Full. Courses. And I mean full. The "appetizers" alone would have been enough. We assumed the menu was giving various choices for each course whereas in fact it was just a list of everything we'd be eating. Methinks that most of the conference registration fee probably went not towards hiring the venue but for the wholesale slaughter of the local marine life. 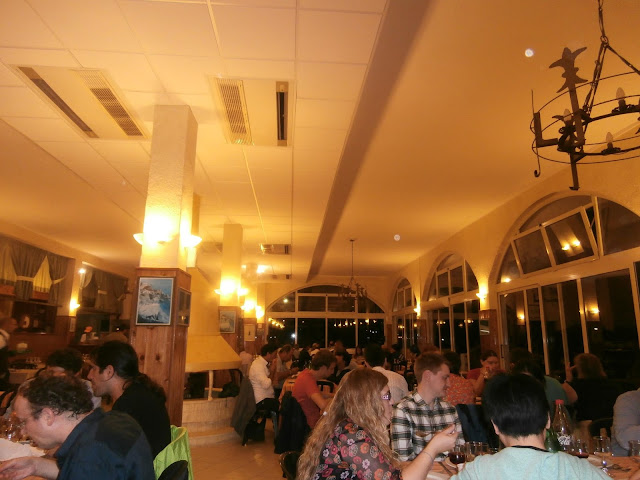 You know how everyone always says after a big meal that they won't eat tomorrow, but never really means it ? Well I literally didn't eat anything the next day. I couldn't face it. The very idea was an abomination.

I'm not complaining, you understand. It was amazing. For the meal alone I rate the whole conference "excellent". I just never want to do it again.

There's not a lot else to tell unless you want the gory detail of the conference, in which case you should have gone yourself you lazy bugger. Though, unusually, it did end on a positive note. For once it seems a particular problem in galaxy simulations has been solved, and while many other problems in the theories remain, people genuinely seem to think we may be getting somewhere. Which is pretty weird to hear at a conference, so I think probably some people may have been suffering from heatstroke. 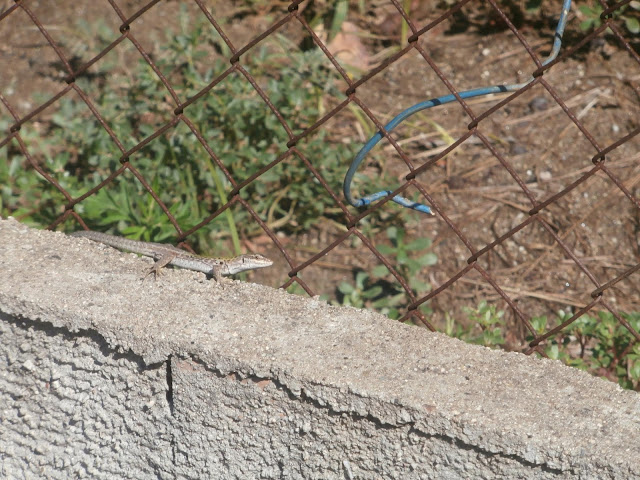 Soverato doesn't have much besides the beach, so there's not much to tell there either... except for a final "note to self". Do not trust senior academics. In an effort to save money on a taxi back to the airport, I found other people leaving at a similar time to me. I exchanged contact details with one and we agreed to stay in touch. I sent several emails the day before but got no response until 10:20 pm when I was told I should make my own arrangements.

Oh, great. Thanks for that.

Thinking that a senior scientist who'd travelled all the way from America to be there* must be a fairly reliable chap - especially since his flight was at 9:30am - I'd decided to avoid making my own arrangements in the interest of saving the Astronomical Institute the taxi fare. Whoops. Lesson learned...

* Which is one reason, if you're wondering, why conferences are often hosted in nice locations rather than necessarily at the host institution. Astronomy is an international disciple and if you're travelling transatlantic it makes little difference to cost if you go to Soverato or Hull, except that people aren't likely to choose to fly across the Atlantic to visit Hull.

Seeing as how my hotel owner spoke so little English there was no way I was going to risk trying to arrange that by phone. So I walked the 20 minutes back up Soverato to the conference hotel and had them book a taxi for me. Not exactly what I was planning on doing at 11pm, but at least the hotel was able to book one without any difficulty. The taxi driver turned up the next day early, completely defying the stereotype of Italian lack of punctuality.

Oh well. They really do say "mama mia" though, which more than made up for it.
Posted by Rhysy at Tuesday, September 15, 2015