Foreign excursions are a lot like busses : nothing for half the year, then three come along at once. So, hot on the heels of the Portugal/France trip came a short northerly jaunt to the northern wastes of Denmark. 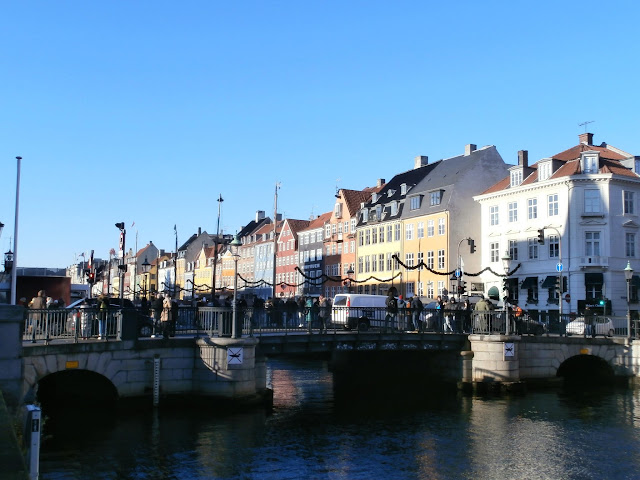 ...or at least to the modern, vibrant metropolis that is Copenhagen. Having had a paper just accepted and a relatively favourable referee's report on another, this was strictly a social call with not a conference in sight. I even limited my internet access to my extremely primitive smartphone. Total science detox FTW !

Scandinavian countries are getting a lot of attention lately as socialist utopias. In fact, practically any European country looks like a socialist heartland compared to Trumpland 'murica; it's just that the Scandinavian lands are rather more equal than others so there's a tendency to pick them as the obvious point of comparison. Actually, the Czech Republic is a technologically advanced nation which also has tremendous income equality, it's just that the salaries are all ridiculously low compared to the lands of the Northmen. I guess 'muricans don't have much truck with that comparison.

Anyway, I'm not going to harp on about the politics after a three-day jaunt, but it does need to be said that Copenhagen is not a cheap destination. In particular it does not seem to cater for backpackers and budget travellers at all. We stayed at a hostel because hotels were prohibitively expensive, and while in some ways it was very nice, and not even remotely comparable to that vile thing in Grenoble, one could hardly call it a utopia.

Physically, everything about the hostel was very nice. But it felt like what would happen if a budget airline decided to run a hostel : everything basically works, it's clean and efficient, but industrial. It isn't like running a B&B like a really good hostel is. It also charges for absolutely everything, including bedsheets which annoyed me intensely. Come on, I'm paying for a place to sleep. That's the whole point. Bedsheets are not an optional extra. And who the hell carries around their own bed linen for crying out loud ?

Breakfast was nice, but that cost extra too and wasn't cheaper than anywhere else. There were lockers but you had to pay extra for... that's right, a lock. Lockers without locks, I kid thee not. Lordy. At check-out time they even asked us to put the bed linen in a laundry bin - yeah, it's a hostel, but it wasn't cheap and it left me wondering what on Earth the staff were doing that I was paying them for at all. Apparently being warm and not dying of exposure is a privilege. It didn't help that we were sharing a room with an obnoxious dude who watched Jason Bourne movies on his phone without bothering to use the headphones and liked the temperature set to 27 C.

BUT on leaving the hostel and accepting the fact that the Danes wouldn't know what a "bargain" is if it phoned them up to offer them a buy-one-get-one-free deal on longboats, Copenhagen is a lovely place. The public transport is not as good as Prague's, of course, and it's rather less intuitive to use, but it works. We didn't use it much though, because the city is tiny and easily explored on foot. 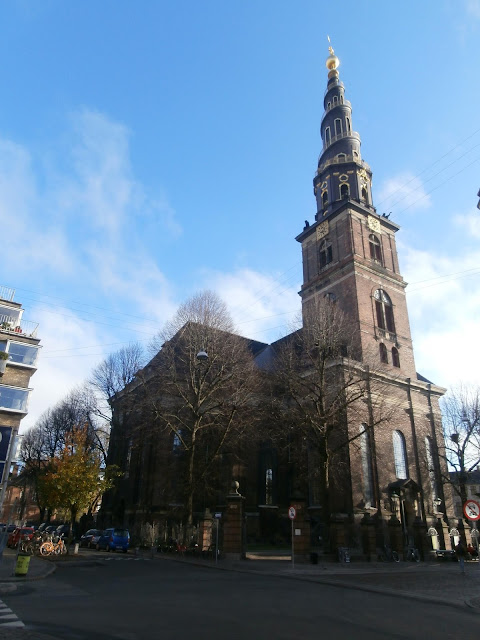 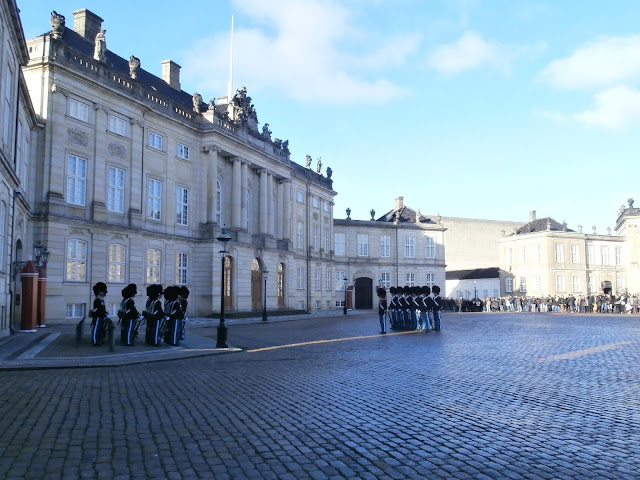 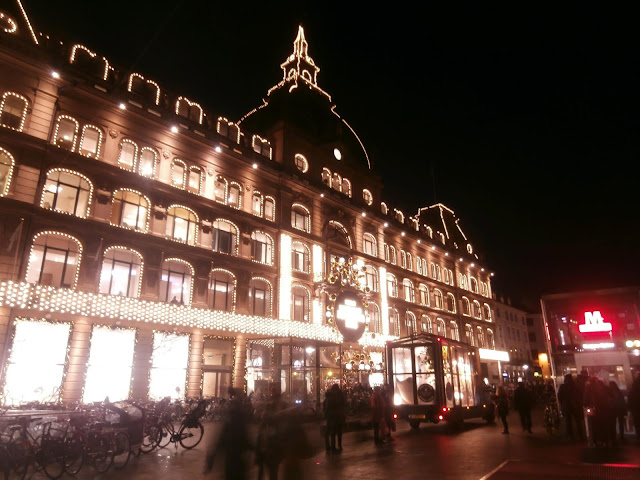 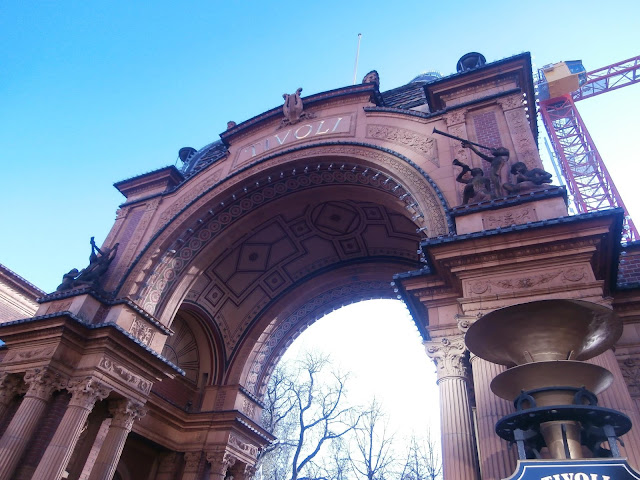 We didn't actually go in anything touristy in the city, though we did try. Tivoli Gardens was closed, since we seemed to have arrived in the changeover period from the Halloween to Christmas seasons. We tried a planetarium but decided the ~£17 entry price was rather too high for a 30 minute presentation, and anyway if it came to it I could just draw pictures of galaxies on the street and shout loudly at passers-by. Astronomy busking, it's a new thing.

What we did see a lot of were cafes and bars, all of which are excellent. The highlight was definitely this place, reportedly the third best pub in Copenhagen. We were actually looking for a cafe because it was 11:30am and we wanted cake. What we got was a borderline debauched Friday night party that presumably hadn't stopped from the night before. Everyone was wasted and the place just oozed Christmas. It was pretty much impossible to dislike it. Naturally, the idea of hot drinks and cake went out the window and got replaced with beer in order to save a sense of self-respect. Later, we compensated with the best cheescake in the entire world. 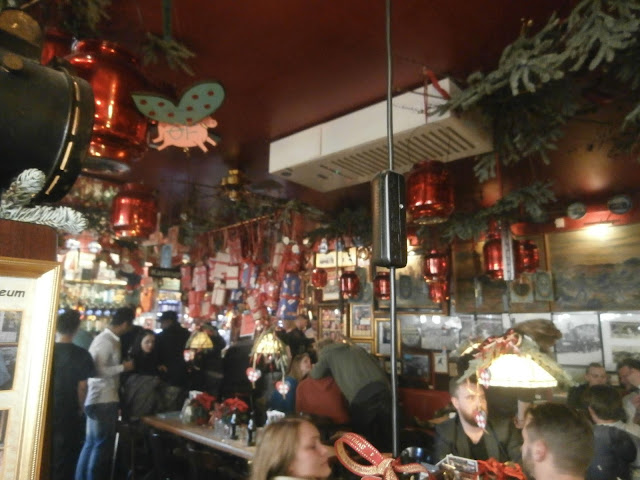 Other highlights include the Street Food center, a relatively affordable hipster-esque collection of food stalls in a great big hall. We had to sit outside, but service was quite quick on Friday. Not so on Saturday afternoon, when it was slower than the bowel movement of a constipated sloth. Eventually we took our hard-won spoils and huddled around a fire constructed on top of an oil drum, as is the hipster way. 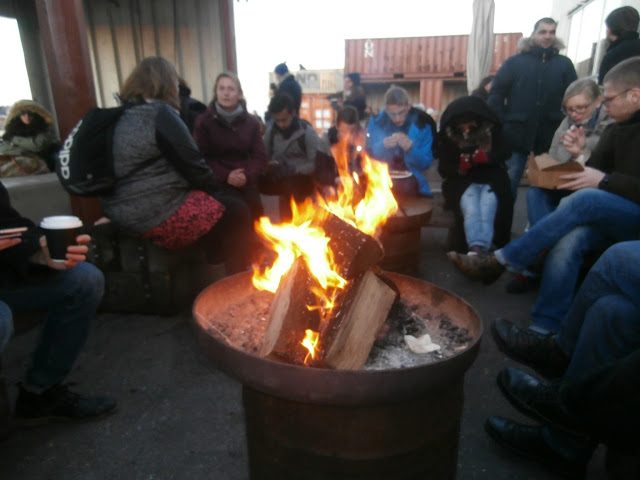 The fire was necessary because it was - and I can't stress this enough - bloody cold. A deep, penetrating cold that could freeze the bones off a mammoth. Those hardy Danes might no longer be sailing across the North Sea on campaigns of conquest, but stand-up paddle boarding at these temperatures is still respectably bad-ass in my book. 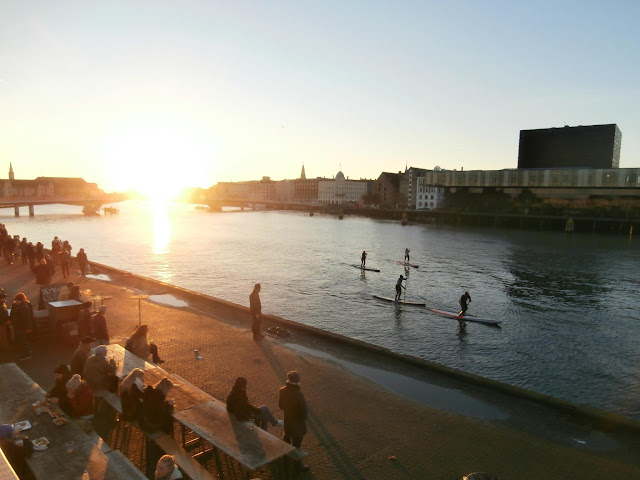 Then there was Christiania, which sounds like it should be a hotbed of church-goers singing songs about Aslan or something. It isn't. It's some sort of uber-hippie commune which reminded me a lot of Teufelsberg. I don't particularly care for the hippie lifestyle, but the artwork's kindof cool to look at every once in a while and it didn't take itself too seriously. Though 10am on a weekday morning is probably not the best time to visit, since it was deserted. 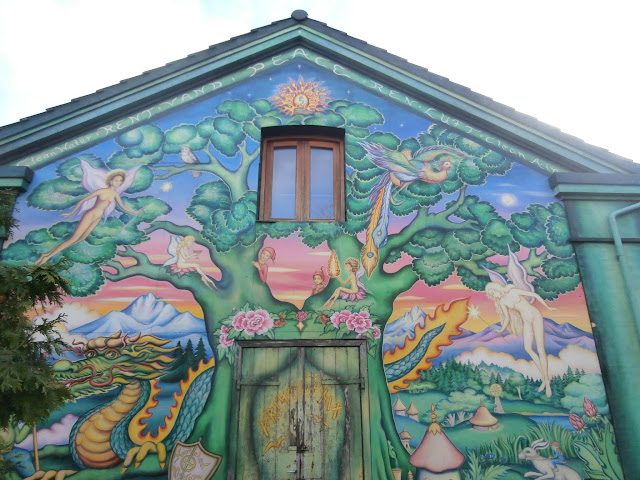 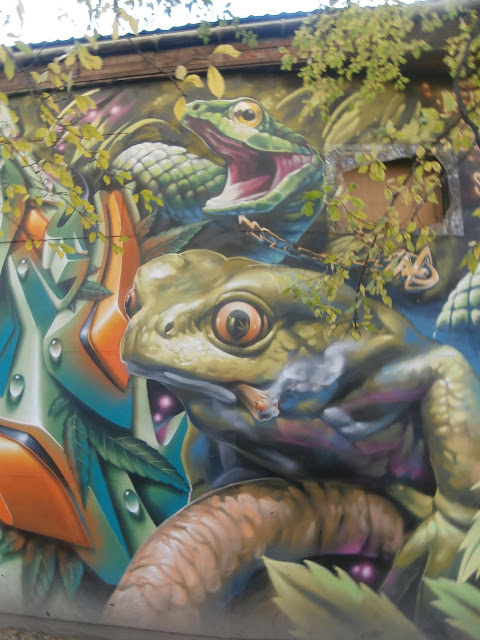 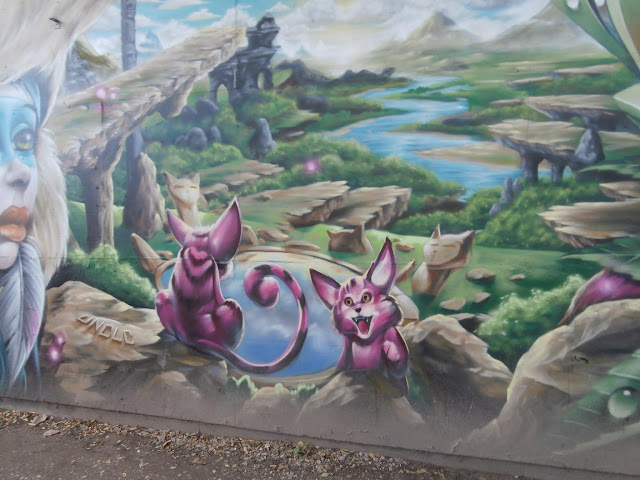 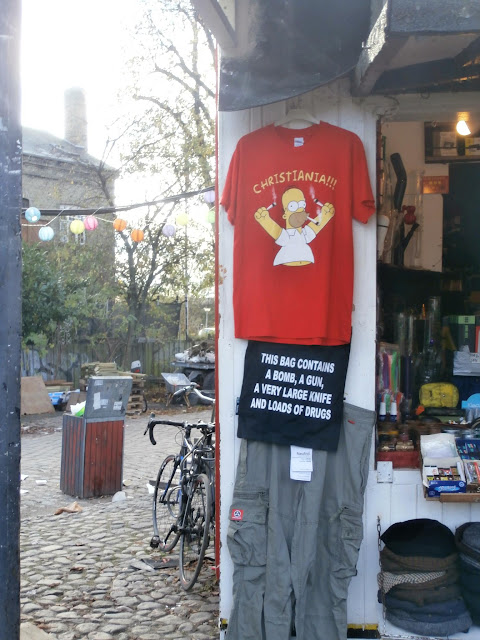 But while Denmark may be widely known as the currently happiest place in the world to live - it looks nice enough to me, couldn't say anything struck me as mind-warpingly awesome though - it's the older, more... adversarial Denmark that I'm more interested in. The one that sent boatloads of large, angry, improbably-bearded men across the seas bent on raping monasteries and looting women, or something. Oddly enough, modern Denmark doesn't seem to go in for promoting that aspect of their ancient culture very much.

Or at least Copenhagen doesn't. However, the nearby town of Roskilde is home to the Viking Ship Museum, which is well worth a visit. We were fortunate to see it in the snow. 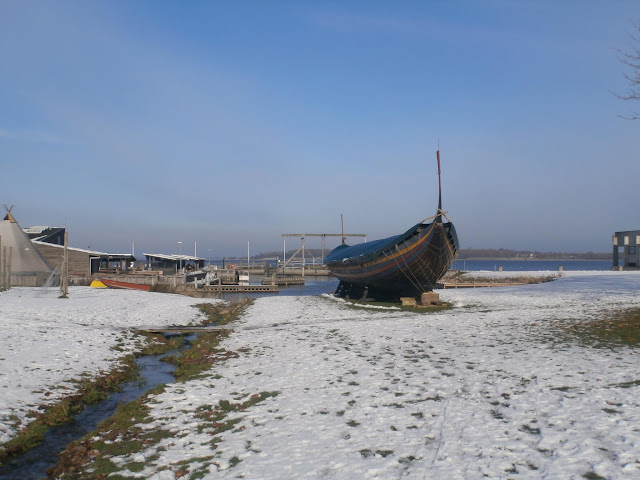 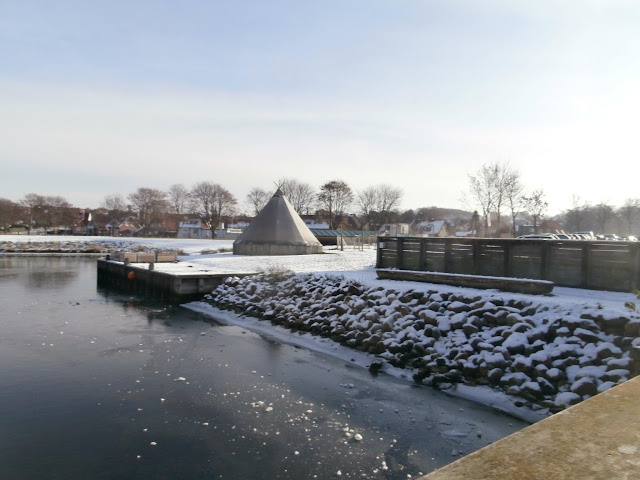 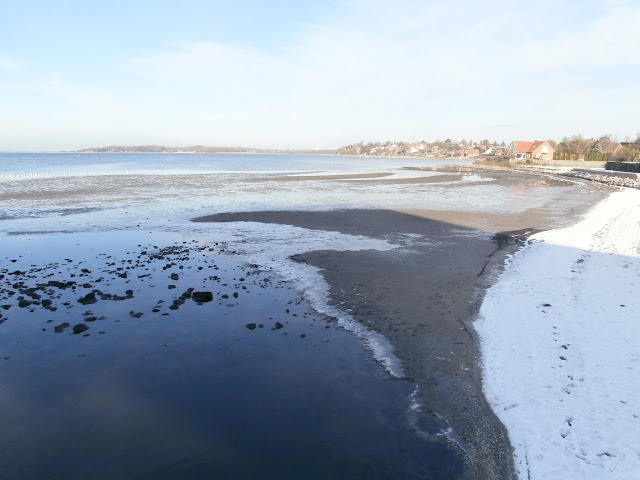 The town is pretty enough, though everything apart from the museum was shut on Sunday. The museum houses the remarkably intact remains of five Viking ships, sunk over 900 years ago to block the entrance to Roskilde's port. Some were trading ships, others were warships. The largest was the inspiration for the famous Sea Stallion, a seaworthy reconstruction on display outside the museum along with several others. 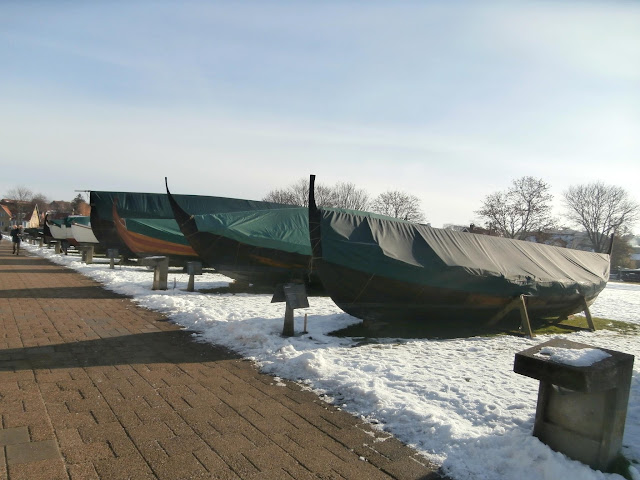 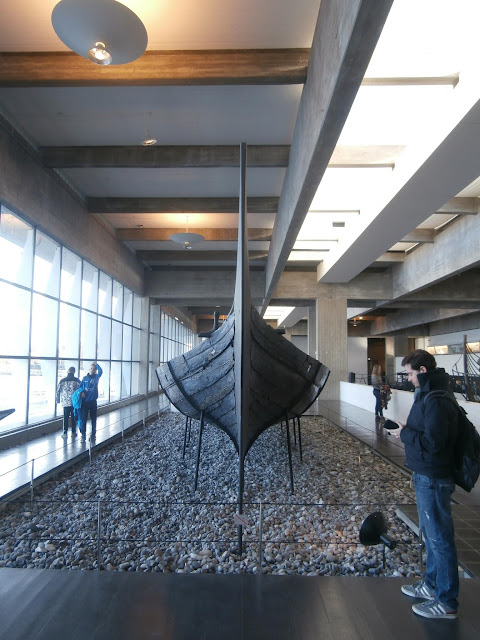 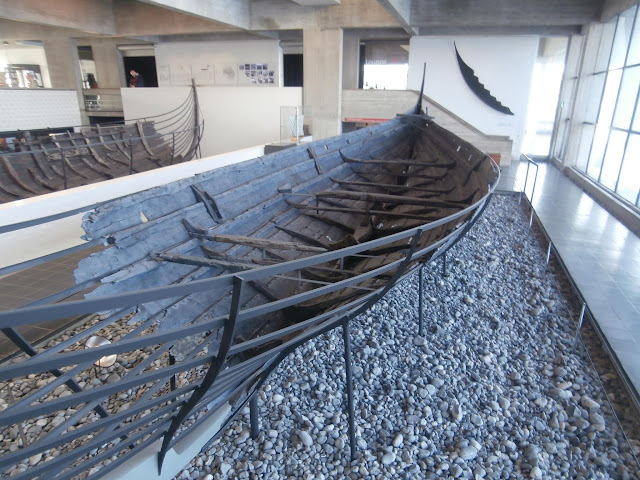 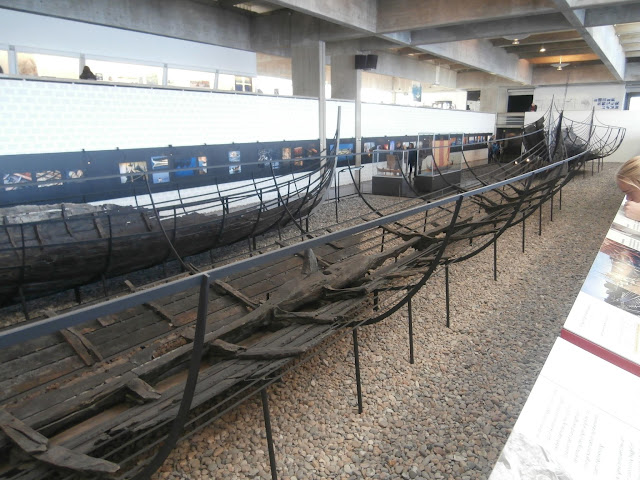 But while the Vikings were great explorers and artists - not least of their artistic achievements being their ships themselves - one panel in the museum does not pull any punches when it comes to the more brutal aspects of Viking culture. The past is indeed like a foreign country. Many things are similar to modern Western behaviour, but in other aspects they were totally alien. I'm not a fan of trigger warnings and safe spaces in general, but I'll warn you that this one is not for the squeamish out of simple common courtesy. It's as grisly as anything you'll see in the History Channel's Vikings.

Was this savagery due to the toxic religious thinking of the Norse ? Certainly, to a degree. But as we're seeing today all too clearly, people will believe arbitrarily stupid things that fly in the face of the evidence that have little or no relation to deities or other religious ideas. We probably have a lot more in common with the Norse than we like to admit; if we don't believe Odin will punish us any more for our misdeeds, the belief that other people are lesser than us is alive, well, and as dangerous as ever.

Returning to Copenhagen we indulged in yet more craft beer, particularly Tor's Hammer (although it's actually barely wine). A 6am start into the chilly wastes to board a 9am flight was pretty unpleasant, but Thor was merciful to his acolytes and blessed the day by making it hangover-free. All in all, Copenhagen is a lovely place but if I ever go back it will be for a short visit in a hotel booked well ahead of time.


I'm going to end on a dismal and uncompromising note, because I must. Throughout these European jaunts I can't but help think what in the f"*@!ing hell is wrong with the people who want to put freedom of movement in jeopardy ? There are plenty of wonderful places in the world, and you want to put access to those at risk ? The Schengen area hasn't caused economic or cultural collapse across Europe, even in countries where the economic systems are very different (just compare typical salaries in Germany and the Czech Republic, for example). We should be talking about continuing the progress we've made in tearing barriers down. Instead we're talking about putting them up again, giving in to the same old tired fears about foreigners we've always fallen for. Only now we have a more potent form of propaganda : bullshit. Modern racism is cloaked in talk of border or population control and achieving economic parity and accusations that it's all the left-wing liberal elite being intolerant and making a fuss about nothing, or utter bollocks about Drumpf magically not being a racist because some non-white people voted for him. Well, screw you. As we enter this next dark chapter in our history, don't you dare say I didn't warn you. Don't you fucking dare. You will though. You people never learn. You care nothing about the truth, only your own twisted narratives. Your closet racism is a stain on humanity. Yes, the left wing extremists are a problem : but they are as nothing, absolutely nothing compared to the generations of xenophobia, racism, misogyny, wealthism and general bigotry fostered by the right. The idea floating around that it's the left who've created the situation we're in makes me feel physically ill. We were the ones who warned you about this for years, and now you're trying to blame it on us. The hell with that.