Not a fan of hyperbole-laden rantings by a 30-something white male about first world problems ? Look away now...

A few weeks ago I went off an an epic eclipse-watching trip to America. You can read all about that here, but suffice to say that while thoroughly rewarding, it was equally exhausting. 34 hours of travelling there on 4 different flights, including a 7 hour delay. A 7 hour bus trip the next day. 4 days at Grand Teton, a 7 hour bus trip back followed by a 15 hour train trip. 4 days in Denver followed by ~24 hours of travelling back on 3 flights and a further 4 days without my luggage.

In a just and fair society, I would surely have been awarded a medal for bravery and given a hammock for my trouble. A small string quartet would have soothed me to sleep every night and fair maidens would have brought gifts of lightly scented bath oil... but I digress. It didn't work out like that.

Since my luggage was delayed, I went in to work the very same day I arrived (this being after 3 flights from Denver to Prague) - it being expected to arrive that afternoon. It didn't, so after the bare minimum of shopping I went home and collapsed. And a proper full-on collapse it was too. I enjoyed it very much.

Fortunately there wasn't too much urgency that week so I exploited the no-one-actually-cares-when-you-turn-up-for-work principle of academia to the hilt. I booked a holiday back in Cardiff in order to properly recover from the expedition and retrieve my barely-used suit for an award ceremony in early October. Yeah, I know, but I never win anything so I don't care.

Alas this respite was to be a fleeting brush with normality. I already knew I had a couple of things that I wanted to complete. I had a paper in progress that I'd sent around for comments before leaving, and I wanted to try and get that done because it had been dragging on for far too long (because of the co-author, I should add). I had another paper at a (slightly) earlier stage of production that I wanted to work on as well, at least a little bit, because that too was witnessing the light at the end of the tunnel.

So two things I wanted to get done but with no pressing deadlines. Not so bad ! But, like the ever-rising tide of entropy, the number of more urgent tasks kept increasing remorselessly, its black entropic waters stained with the bloody remains of those who had Failed to Satisfy the Gods of Bureaucracy and thick with the lethal Sharks of Missed Deadlines.

Months ago, I'd volunteered to give a lecture course at the local university. This will be a 4 part course of 90 minute lectures each (I don't know why they have such a crazy format, but they do). Things now being more urgent, I started preparing this in the evenings (still being on half-American time and wanting to get some of my own work done during the day). So, 18 hour days. Yipee.

Then there were the observing proposals. One of these was almost done (and not written by me at all, I just gave comments), so, okay, not too bad. Then a second (of a sort) turned up in the form of a new collaborator who came and gave a talk. This gave us the opportunity to exploit some already-awarded observing time by fitting in some new observations if the weather allowed. So no need to prepare a full observing proposal, just a list of targets and images. Not too bad, but by now even the number of "not too bad" tasks was increasingly resembling a growing shoal of piranhas. A warm wind was rising, heralding an oncoming firestorm of death and destruction, or at least something quite unpleasant. Like Mark Zuckerberg, perhaps.

Both of these last tasks had to be done before the Zuckerberg piranha standstorm ripped everything to little pieces I left for Cardiff the following week. Which I managed, but I was still working evenings on the lecture course. I was asked to review a paper for ApJ, which I (perhaps foolishly) accepted. Having hardly done any reviewing before, I didn't really feel I could say no. The deadline for that one was three weeks.

Then my office mate suggested we prepare another, entirely different proposal from scratch. In a week. Well, somehow we got it done in two days. I don't know if it's any good or not, but we did.Oh, and there was an institute-wide evaluation form that needed to be completed by the same time as the referee report. Which is tedious in the extreme. It asks for things like-:

On finishing the proposal I left for Cardiff that same day. But I wasn't done there, oh no. You can't prepare a lecture course in a few evenings. And having lots of small tasks on the go is very different to having one big task, because you have to constantly switch from one to the other and break the flow. It's not much fun at all. I was exhausted.

Let's recap. Two weeks after returning from the US, I'd :

And what was still in progress with pressing deadlines :
So back in Cardiff I spent a lot of time working on the lecture course. Refereeing the paper took a back seat, as somehow I'd managed to get the most important bits done before I left. I did still have a nice time at home... 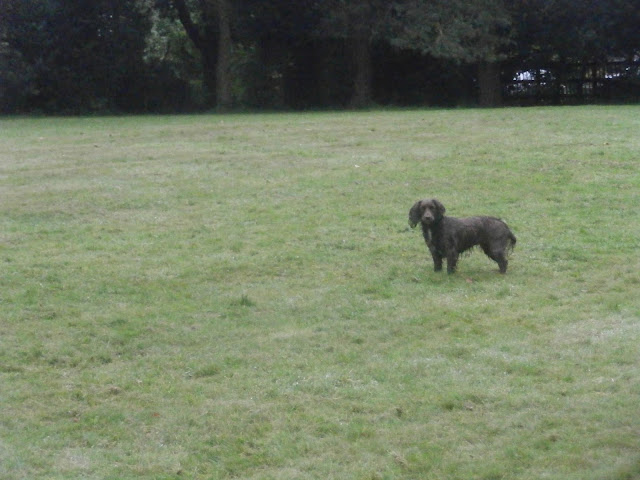 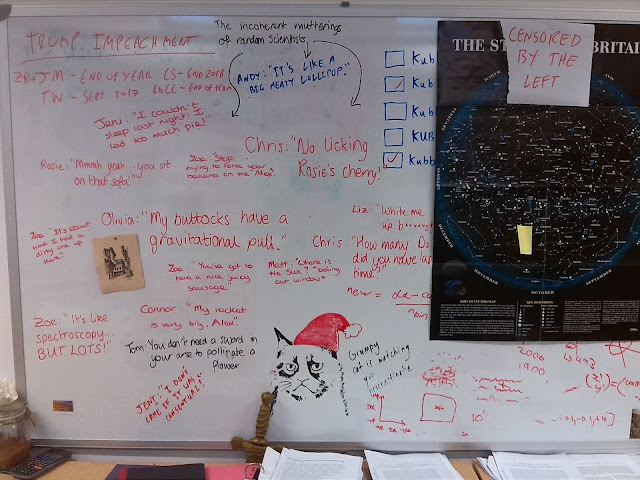 ... but it was very definitely a working holiday.

Then I came back from Cardiff to Prague, briefly. I collapsed in my flat and 10 hours later rushed to the shop to buy some milk, because dammit I was going to have a cup of tea and woe betide anyone daring to stand before me. Why the rush ? Because I had another plane to catch. A short one, mercifully, to the Netherlands, but that still meant an hour-long trip to the airport and about another hour wait inside, followed by the flight itself. Airports, at this stage, were beginning to get on my nerves just a teensy-weensy little bit.

The one hour flight, which I would normally dismiss as being too short to actually notice, seemed to take a life-age of the Earth before it disgorged its ungrateful load back into the rat race : to wit, a train followed by another train followed by a shuttle to the hotel. I had neither the time nor inclination for sightseeing, but I was beginning to think that the fraction of time I was spending just getting from place to place was becoming silly. Maybe even daft.

The Netherlands trip was not for some desperate escapist hedonistic jaunt, nor was it for a serene trip down the canals to inspect the windmills and look for mice wearing clogs. No, this was a purely work trip for the annual ALMA all-hands meeting. And I have to say that in terms of hearing the latest scientific breakthroughs, hob-knobbing with the crème de la crème of the astronomical world, and enjoying fine dining at the taxpayer's expense... this meeting ranks pretty near the bottom.

It's not really a conference, see. It's a sort of wandering office, turning up every year somewhere new to tell people the latest operational procedures for ALMA. Is it useful ? Yes. Is it boring ? Very. Could it be done via emails instead ? Not really, because it's so boring that no-one would read them. And then everyone would keep on using the old operational procedures which would likely unleash the Ten Plagues of Egypt back upon the world, with the Four Horseman of the Apocalypse laying waste to telescopes on an unprecedented global scale. Dishes would collapse. Antennas would crumble. Dipoles would un-dipole. Mirrors would become slightly scratched. It would be simply awful. It wasn't all bad though. Amsterdam may be so flat it's an equipotential surface, and the hotel was in the middle of absolutely nowhere, but it was a nice hotel. 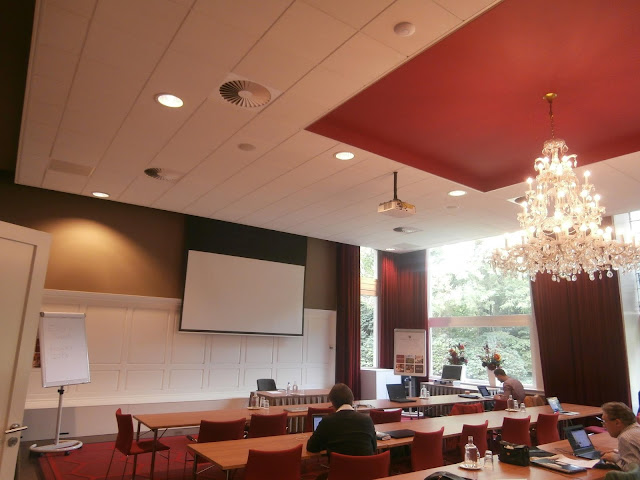 My hotel room had an adjustable bed, so I adjusted it. 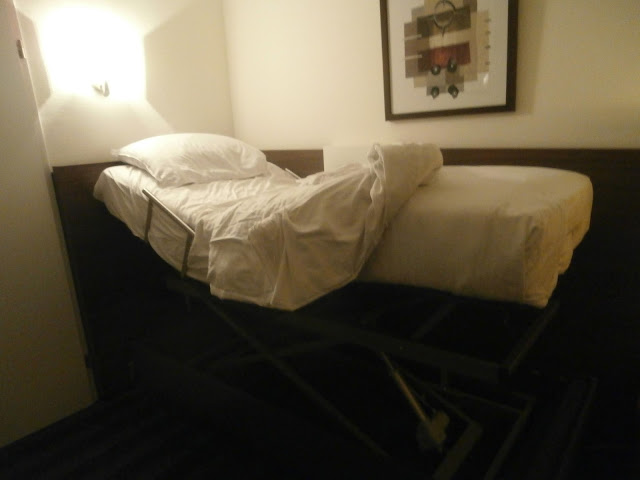 No, I have no idea why anyone would possibly need their bed to be four feet off the ground and compressed in a bizarre fashion, but if that's what you want, there's nothing to stop you.

Most evenings I spent at least some time still working on the referee report and the bloody lecture course. There were some compensations. Last year the meeting was in Lisbon, where they gave us a free USB fan to keep cool. Being in the drizzly Netherlands, the free umbrella was equally appropriate. The waffles ? Quite tasty. The coaster ? Useful ! 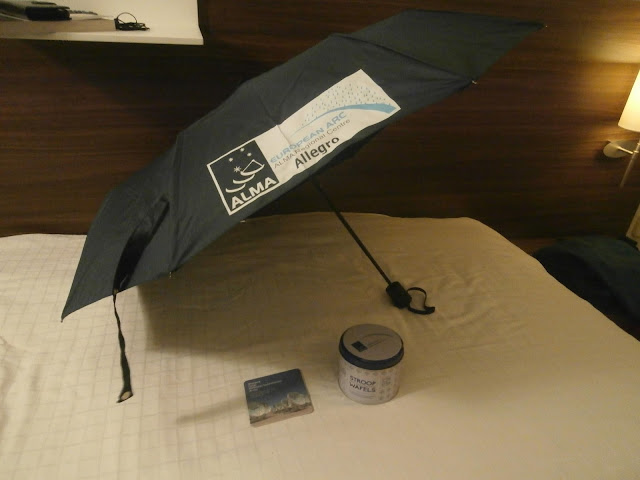 ALMA has an annoying corporate streak; last year there were prizes given out for various mundane activities. This year there was a short quiz for being able to expand a small selection of acronyms correctly : the prize, a free drink. Well, the number of acronyms ALMA generates is comparable to the amount of data it produces, so it was time to take a leaf out of Littlefinger's book :

Which won me a free drink despite all being wrong, giving me some hope that the corporate virus has not yet fully destroyed the ALMA crew.

The hotel breakfast was excellent, as was dinner. Lunch was pretty awful, because it was Dutch, and the Dutch apparently don't understand the concept at all. Nor, alas, do they understand tea. It is possible that they grasp the concept even less well than the Americans, which made me very sad and angry inside. I swear, one day I'm going to go full Arthur Dent until the entire world understands the incredibly simple truth about tea. Dammit, it's just not acceptable that first world countries in the 21st century think tea is something so weak you could use it for homeopathy.

Also there was a conference social, which proved that no-one has told the Dutch what this means in English, or they just don't care. After all, there are hardly any midgets in Holland. Presumably that's a selection effect, since they'd all drown during floods. 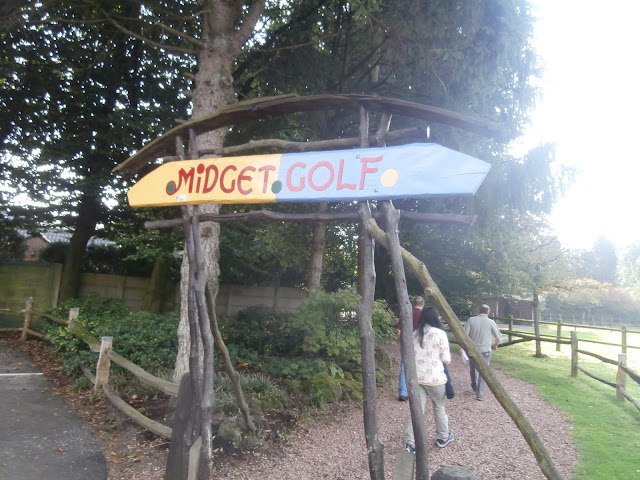 The Dutch language really is quite amusing, it must be said. 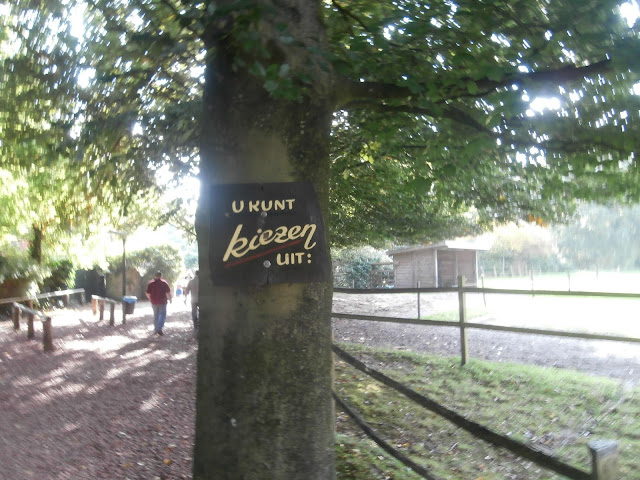 The minigolf was rather fun. 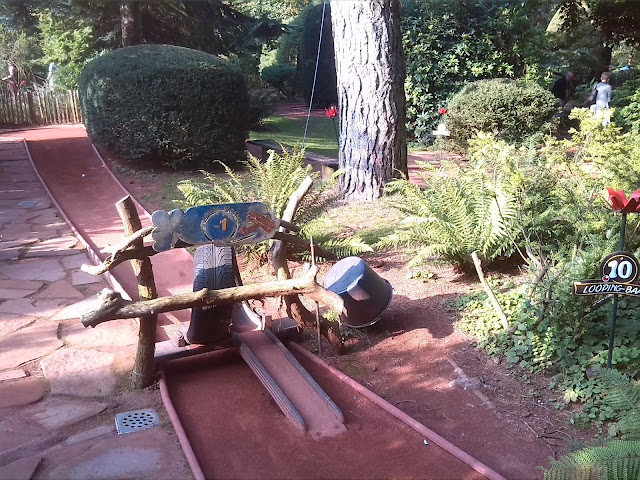 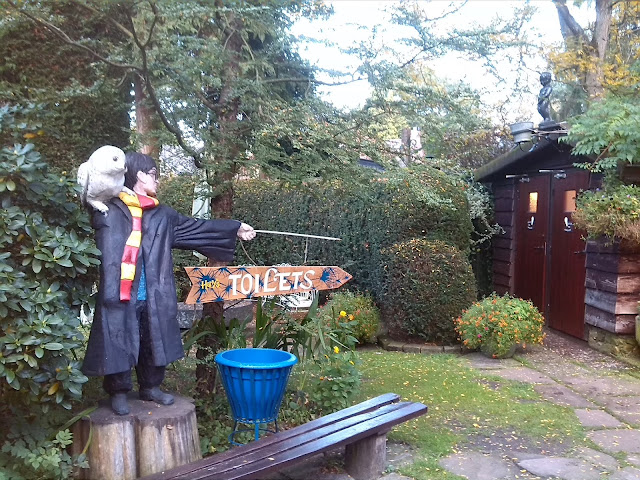 Anyway, I submitted the blasted referee's report (almost wishing I'd surrendered anonymity just so I could tell them that this really could have come at a better time, thanks), sent one of my papers around for comments, and then went back to Prague to finish the stupid evaluation form thingy. And then I collapsed, again.

This silly state of affairs is slowly improving, but isn't over yet. The other paper remains incomplete. Another, completely different paper by a co-author remains unread. The lecture course isn't quite 50% complete. Next week a meeting of one sort or another is scheduled for every single day. But after that, things had damn well better settle into something resembling normality, because if the light at the end of the tunnel is an oncoming train, then that train is going to be very, very sorry. 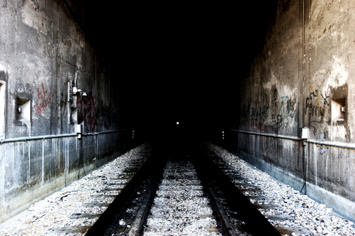