An Obligatory Rant About Game Of Thrones (With Spoilers)

At least I assume it's obligatory for anyone with a blog. They probably come chop your arms off or something if you don't.

This post contains SPOILERS. If you don't want the show to be SPOILED, stop reading NOW. I mean it.


Seriously, there are SPOILERS ahead.

You haven't reached the SPOILERS yet. Keep scrolling.


Okay, I think that should be fair warning to anyone who hasn't seen how it ends yet. I've got this news feed app on my phone which sometimes shows me articles with spoilers IN THE FRICKIN' TITLE. People who write such things ought to be drowned and beaten, and then drowned again just to make sure.

Anyway, the internet is full of people who hate the final season for some reason. I am not one of them. I, for one, want to hear other people's stories. If I wanted to write my own, I'd do that instead. Okay, there are exceptions, like the god-awful last five minutes of True Blood where I wanted to smack the writers in the mouth because come on what the hell were they thinking, but how anyone can feel that way about Game of Thrones completely escapes me.


That's not to say it didn't have the odd duff moment here and there, but personally, I felt it evolved in a natural and self-consistent way for the entire run. There were parts I felt could have been executed better (especially, in season 7, Littlefinger's... well, execution), but I have no qualms with any of the events that happened. All the faults I can see (which are not many and not major) are in presentation, not with the plotline.

A good, interesting development in any story (or character) is when they do something that's unexpected, unpredictable, but absolutely consistent with established patterns. Similarly, morally ambiguous characters are interesting when they choose to do both good and bad actions but in an internally consistent way. Game of Thrones did that in spades. Freakin' SPADES, people.

Yes, true, some people did predict certain events. But lots of people also predicted a whole bunch of other ridiculous shenanigans* that simply didn't happen, so it still counts as genuinely unpredictable.
Bran on the Iron Throne ? I thought was a bloody daft idea when people suggested it. And yet... after the fact, it does make a certain amount of weird sense. Could it have been explained better ? Yes, probably. On reflection I do think the final season - and possibly the seventh as well - was too short and might have been better with a regular ten episode run, but that's about all I'd change. If the writers didn't think they had enough material for an extra season, then chances are that getting them to write a whole other season would be a tremendously bad idea.

* I'd be willing to bet that someone, somewhere, predicted that the final scene would be Melisandre turning Jon Snow into a cactus and doing unspeakable things with said cactus.

Anyway, my money (if someone had held a gun to my head, which fortunately they didn't) was on the more obvious choice of Jon Snow. Everyone loved him, he didn't want to be king, he had the most legitimate claim to the throne, and was a proven battle commander and warrior. But a warrior is the very last thing anyone wants after a massacre, and legitimate claims clearly don't guarantee a good ruler. And of course there are extenuating circumstances : large numbers of formerly-enemy soldiers want him dead. So Jon Snow may be the more obvious narrative choice, but not actually the more realistic one. 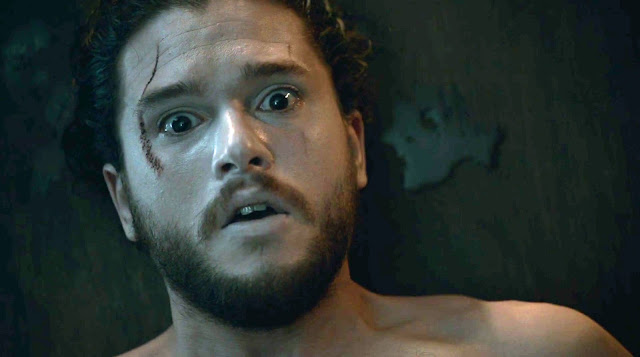 Besides, Jon Snow wouldn't have broken the wheel, he'd have just kept in spinning more gently for a while. The lords of Westeros needed a major change, not a better version of what they'd had before. They weren't ready to accept full-on democracy, but they made a massive change to the system of government even so.

But have they chosen the right king ? Probably. Originally I thought Bran would have been a stupid choice that made as much sense as... as.... as a...very.... senseless thing : a physically weak character in a war-dominated world, who's generally been ineffective, done largely bugger all, and has never expressed any previous interest in ruling anyone. I still think he should have done more besides having a bloody good memory and a weird affinity for birds : some more dramatic, obvious achievement would have made the final narrative work better. But the reasons for choosing Bran were good ones, but became apparent only after the event actually happened. Which is what a good plot twist is all about.

Daenerys set out to break the wheel. Well, the wheel was made from the flaws of hereditary monarchy, which is always vulnerable to problems of the luck of the draw. And after Kings Landing had been ground into dust so fine it'll give everyone sneezing fits, and consequently there being zero appetite for continued warmongering, choosing a near-omniscient disabled young three-eyed raven isn't crazy. He clearly knows everything he could possibly ever need to rule. He's also not going to go charging into battle*. He's never hurt anyone. Absolutely no-one has anything against him. He's got a heroic story (even if it's not quite as heroic as it should have been). Seems like a good choice, given the circumstances.

* Although being wheelchair-bound doesn't stop Mad Hamish in the Discworld novels. 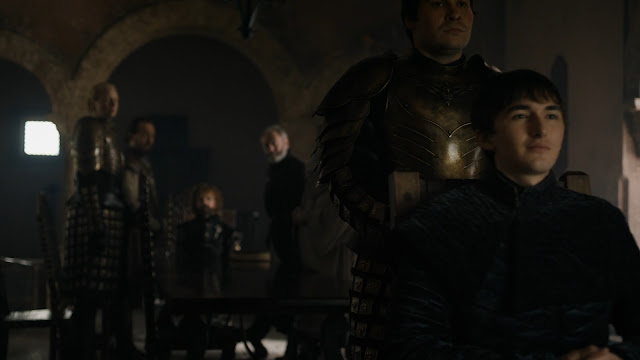 And anyway, Jon Snow is clearly Batman : the hero Westeros deserves, but not the one it needs right now. Appointing Jon would have only reinforced the baseless legitimacy of the hereditary monarchy, and is just too obvious for a show that delights in plausible shock twists. It also tends to go for the, "what would happen with actual people doing this ?" angle more than it does "what would make for a good story ?".

Still, a major character like Jon has to have a major impact, and he does. Killing Daenerys was Jon's legacy, instituting a better ruler rather than taking power for himself. It's a very Jon thing to do.

Which brings us at last to Danny. Say what you will, I thought Daenerys' turn to evil was done extremely well. It could have been improved if they'd had a little more time, but the transition felt natural. Danny has always had an ambiguous moral element of a stern ruler : you never quite know if her threats are meant purely for deterrence or if she really does think people deserve the extremely harsh retribution she occasionally inflicted. What Danny says she wants - a better world, peace in our time, etc. - is all very well, but what everyone forgets is what she's prepared to do to get it. 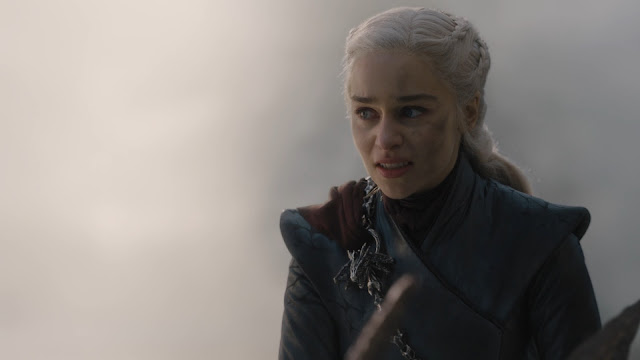 Everyone seems to think the "let it be fear" line is critical - they're not wrong, but more important is Tyrion's summary of the evil men she executed on the road to power. The obvious cliché quotes are the "first they came for the socialists...", and ,"he who fights with monsters should take care he does not become a monster himself". Daenerys has never, ever had any qualms about killing those she perceives as enemies. Getting her to show mercy is like getting blood from a stone. She often claims to want criticism but rarely actually takes it on board - only partly because she usually turns out to be right in the end. She kept threatening fire and blood, and it's been abundantly clear that she's only held back because Tyrion begged her not to. It shouldn't come as any surprise that something eventually snapped.

Danny's decision to massacre the innocents is neither pre-planned nor a sudden impulse : it's both. In the after show the writers describe Danny as being partially a victim of circumstance, and had her life been different she might not have turned out the way she does. Compare her with the ever-virtuous Jon Snow. He starts off assuming he will achieve nothing in life at all, so anything he succeeds in is a nice bonus. Danny, on the other hand, starts from a much more complex position of abused privilege; molested, raped, abused, told she's destined for rule and loved by the people for her sheer legitimacy. Once she achieves power she really has no-one at all to tell her when to stop : there are advisers to tell her what she shouldn't do, but not what she can't do. Jon Snow, on the other hand, always has someone telling him to fuck off. And that's probably what you need to stop from turning to the dark side.

So the way I see Danny's thought processes on the back of the dragon is that she feels betrayed by the world. She's been told - and apparently believed, though god knows why - that the people love her. She's already lost huge numbers of troops and two dragons in her quest to "liberate" the people, i.e. bring about regime change in Westeros. She's been betrayed by Jon Snow and Varys, is deeply suspicious about Tyrion, and has seen that the whole people of the North will never accept her. In the heat of battle, that's enough - more than enough ! - for her to view surrender as just another betrayal, another of Tryion's clever plans to keep the wheel turning. If she has to choose the people over her own destiny, Danny would only ever make one choice : they become in her mind her enemy, and she only ever has one way of dealing with enemies.


Which is not and never has been Jon Snow's approach. He knows that sometimes you have to make peace with your enemies (as he did with the Wildlings) but sometimes you have to kill them (as he did with... umm.... well, the Wildlings, for starters). Whereas Danny's choice leads her to become the monster she was trying to fight, for Jon Snow this isn't the case at all. Danny fights for herself because she believes in her own myth. Jon Snow fights for the realm, an ideal of justice that everyone should obey, and that means fighting against literally anyone trying to harm it (he'd probably fall on his own sword if he thought it would help). So Jon has both an ideal of the common good, a personal moral code as to how he himself should act, and people telling him to, "fuck off, ya big bastard". Danny doesn't have any of those.

Finally, if Danny lives there would be nothing but a reign of terror : for Jon to take extreme action to prevent that doesn't make him the same. Rather, if he hadn't taken action, he'd have been guilty of aiding the rise of the worst tyrant in living memory. He who fights with monsters does not inevitably become a monster himself. And - making no apologies for ending this on a political point - when we have political figures who are openly racist but can't stand anyone saying nasty things about them, who feel comfortable in denigrating whole groups of people but can't stand the merest criticism themselves, well, I for one think this is much-needed message in the world.
Posted by Rhysy at Wednesday, May 22, 2019