Every year there's an "all hands" meeting for anyone who's even so much as accidentally glanced at ALMA data management in Europe. This year's was in Koenigswinter, near Bonn. Having fretted like you wouldn't believe about the possibility of a No Deal Brexit, the extension meant I could go to this without worrying about having to get back into the Czech Republic afterwards.

Instead the issues were all about getting there, not coming back. I signed up at the very last minute, being convinced that I'd done this months ago. Then it turned out the hotel was full, so I spent a frantic couple of hours searching every other hotel in the vicinity only to discover they were all bloody full as well. How that happens I'll never understand - apparently the demand to see miles and miles of generic rolling forested hillside is extraordinarily high. Fortunately there was a last-minute cancellation so a room became available after all. Hooray ! 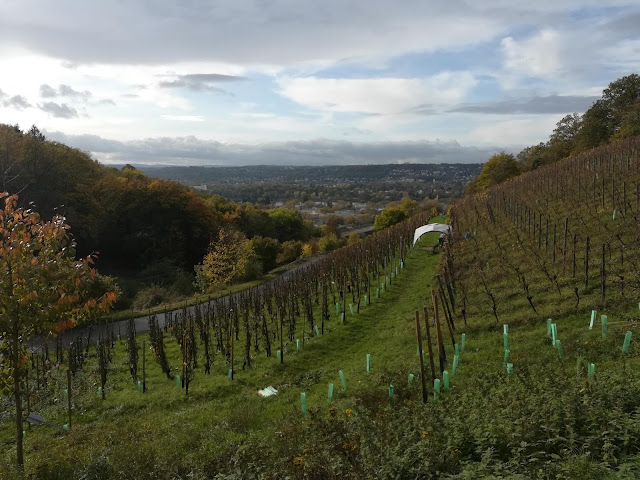 Getting there wasn't much fun, though, since I had an absolutely stinking cold and it was a seven hour drive. I mostly sat in the back feeling utterly wretched and sniffling. At least there was a nice sunset to look at. 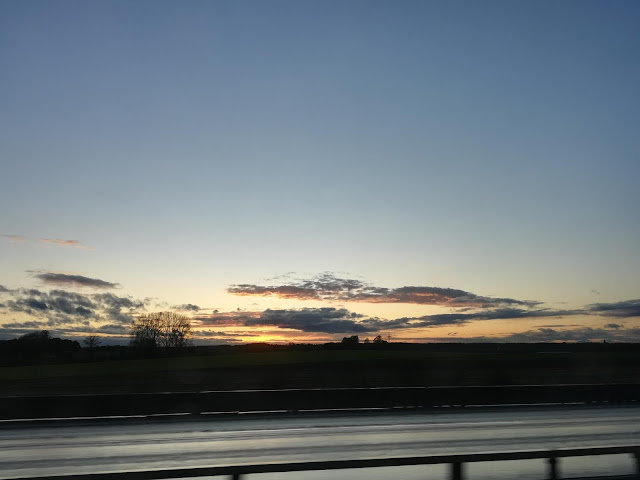 We missed the opening buffet dinner but I didn't really mind since I very soon collapsed. This was quite rejuvenating and I woke up no longer feeling like I wanted to make zombie noises every time I shuffled along, or had any particular inclination to vomit at people.

It must be said that ALMA meetings are distinctly corporate in flavour compared to other astronomy conferences. In the past, they've nonetheless been quite lively as people have rather strong opinions about how to do things. But now things have reached a steady state where everything is ticking over nicely and no-one is likely to spit in anyone's eye or start a protracted blood feud over how many proposals got accepted. They've found a formula, and it just works.

There are only two things of note about the meeting. The first is this spectacular Lego ALMA model : 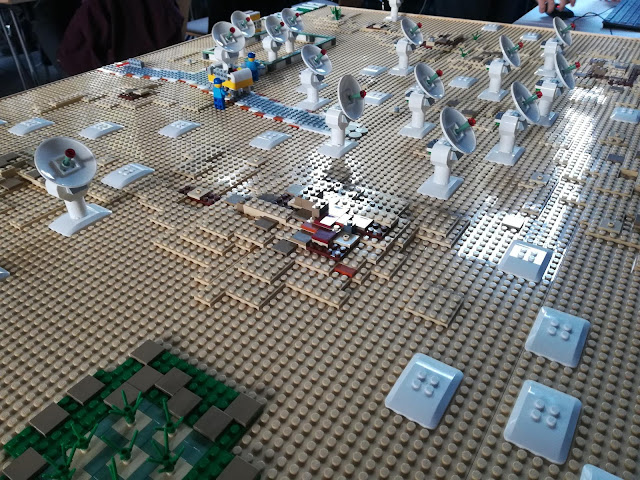 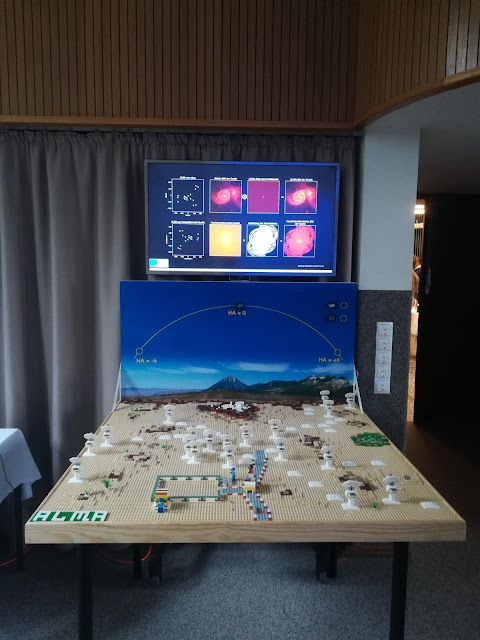 The pedantic reader will immediately note that there are neither the correct number of antennas nor do the models have realistic designs. Well, sunshine, you're gonna wish you hadn't noted that, because the model is interactive and stupendously cool. Each antenna can be placed on specific pads, where some electronic equipment registers its presence and alters a virtual array in real time. What this does is simulated how real data would be processed by an interferometer of that exact configuration, and you see the result on the screen above the model. Interferometry - and I can't stress this enough - is hideously complex, and if I had my way I'd make it illegal, but this model does the damn thing in real time using bits of Lego. That's like building a microwave out of a yogurt pot and a dead bat. Yes, alright, and a PC running in the background, but you get the idea.

Anyway, this is a very nice way to illustrate how the layout of the antennas really matters; if all your antennas are far apart from each other, you'll see fine details but no large-scale structure; if you only have antennas close together you won't see any details at all. Only by having a mixture of different antenna spacings can you see something close to reality. The model lets you choose which image you want to view (a galaxy, a simple preset model, or a live feed from a camera) and how long to simulate the integration time. Obviously, I don't need to wax lyrical about how tremendously impressive this is. Suffice to say that every home should have one.

The other thing of note about the meeting is that some poor soul decided to arrange karaoke, from which I excused myself from on the grounds of not wanting to collapse on stage and/or frighten the neighbourhood cats by singing with a sore throat. This event was conducted with far, far too much sobriety, but the landslide winners (the UK group) managed - and I kid thee not - to start a mosh pit with "Anarchy in the UK" ("Anarchy for the U.K. / It's coming sometime - JANUARY 31st !").

The social excursion was probably my favourite of all the ALMA meetings so far : a trip to the massive Cologne cathedral. And it really is massive. I tried to resort to panorama mode to get it all in, but it didn't work. Instead I only succeeded in chopping someone's leg's off. 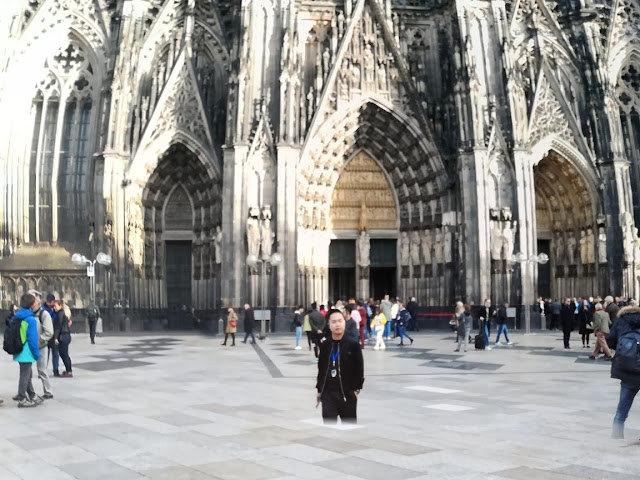 There was also time to wander round a bit before exploring the cathedral, so I went across the bridge with is emblazoned with hundreds of A4 paper sings instructing readers to "Fuck Theirry Jaspart". Who's Theirry Jaspart ? I looked him up, and it turns out he's a rubbish artist trying to attract attention. And I'm not going to back down for calling him rubbish because a) he is and b) he clearly spent ages on a lame publicity stunt. I'm not going to even give him a link. Fuck you, Theirry Jaspart. Stop sticking signs on things ! 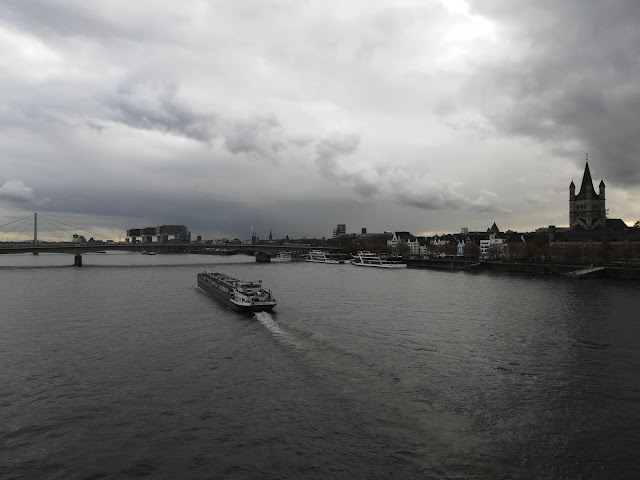 Back to the cathedral. As I said, it's very, very large. 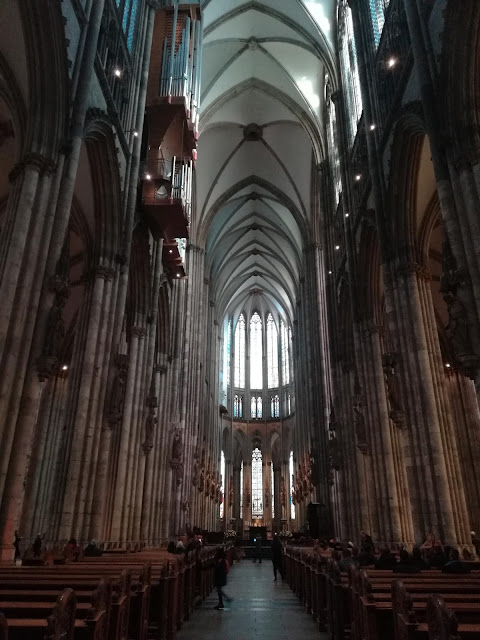 It also claims to house the mortal remains of the Three Wise Men in a shiny golden reliquary. 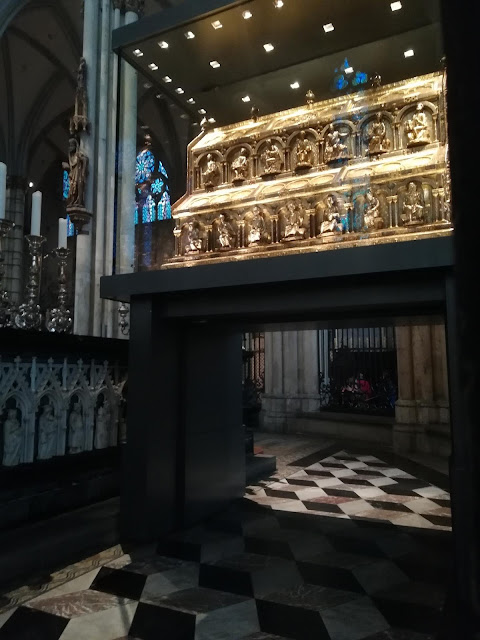 Entirely plausible, I'm sure. More interesting was the tour of the roof. 45 metres is really, really high, and that's still a full hundred metres or more below the peak. 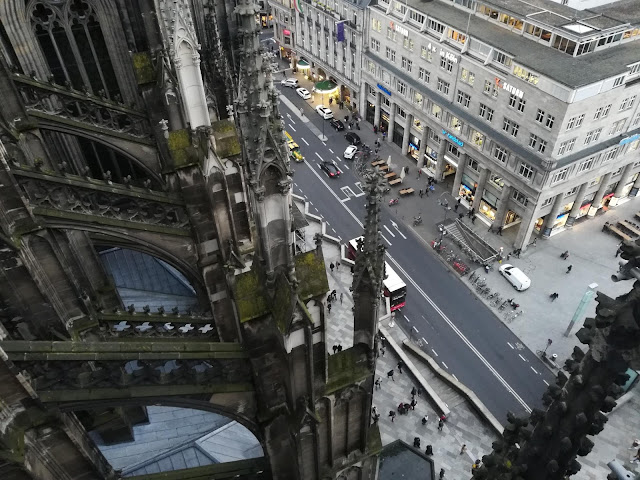 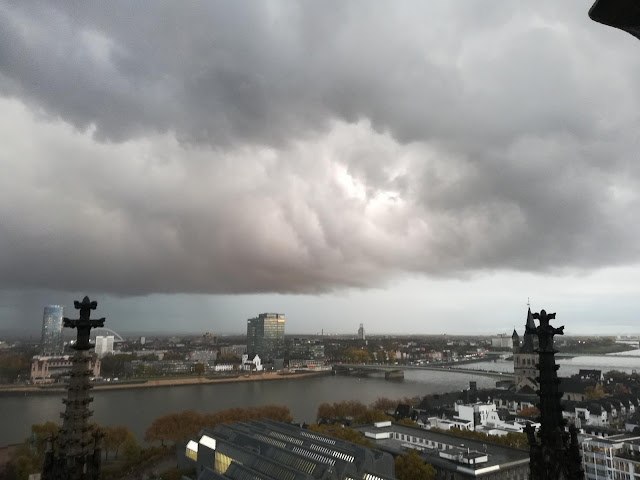 They started building the cathedral in 1248 but soon got bored when they realised they hadn't a snowball's chance in hell of ever finishing the thing, probably because there were only ever about 60-80 people working on it. Only the lower levels, for the most part, are actually medieval, since the builders decided to take a quick 300 year break while they worked out what to do next. Then better construction techniques came along and they got on with it, finishing it off in the 19th and 20th centuries though sticking to the original medieval plans (which fortunately they still had). This means the interior of the roof looks extremely unusual. 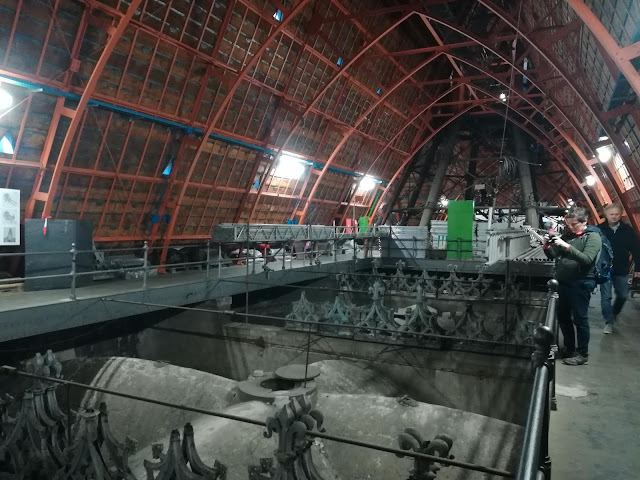 Personally I thought this was great - modern materials and techniques but with medieval styling. One particular tower - which marks the exact centre of Cologne - is particularly weird, looking normal from a distance but "like the Chrysler building" (as our guide put it) close-up. 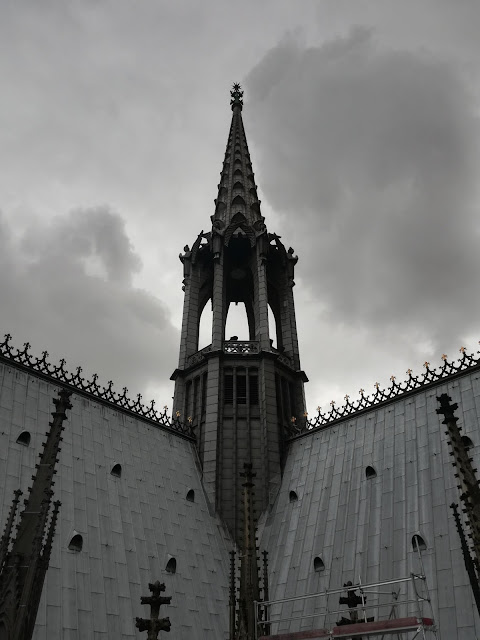 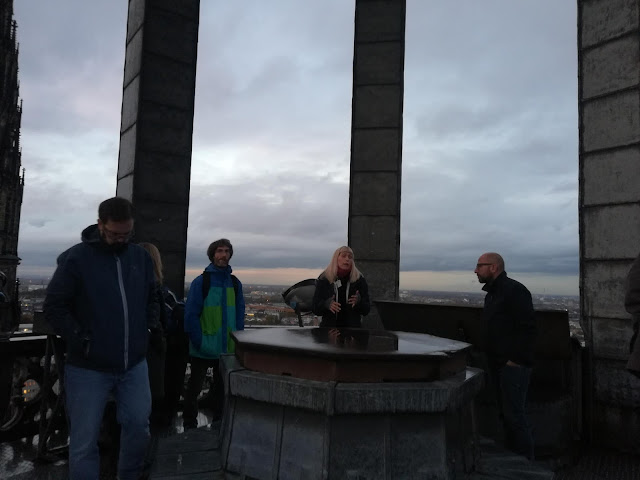 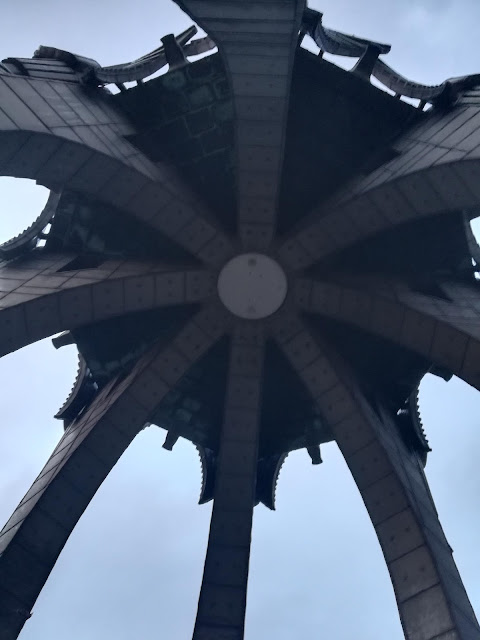 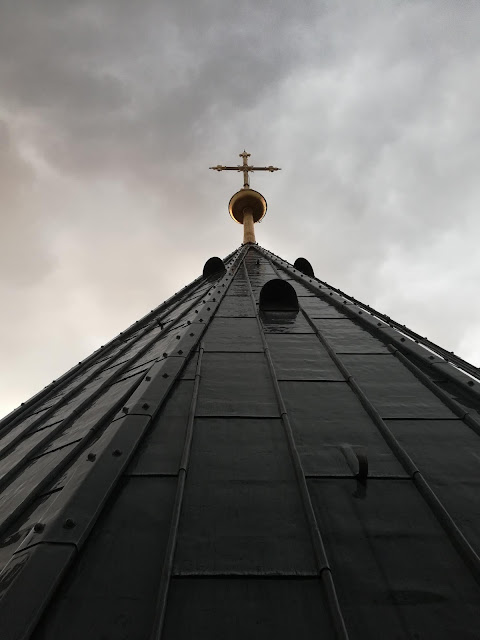 All this finally ended in a very nice sunset over Cologne, and then everything went back to normal again. 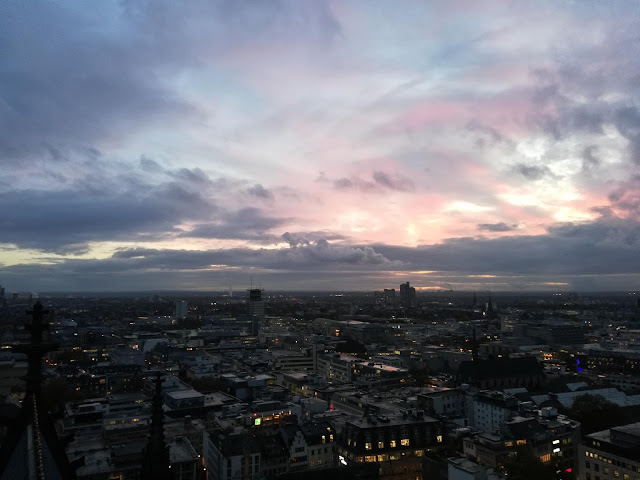