Stuck indoors ? Of course you are. You bloody well should be, at any rate. But are you going stir crazy ? Are the walls closing in ? Do you long for the boundless freedom of the great outdoors ? Well, I can't take you outside, but I can show you a view of space you may never have seen before.

The Virgo Cluster is everyone's favourite galaxy cluster, and anyone who says otherwise is a liar. As the nearest major cluster to us, we can survey it with extremely high sensitivity in great detail. And with clusters being the densest type of galaxy environment, there's nowhere better to watch the life and death of galaxies. Kind of like Big Brother, only less voyeuristic and more gassy.

A very long time ago I made a map of Virgo using optical images of the galaxies to make a nice pretty picture : 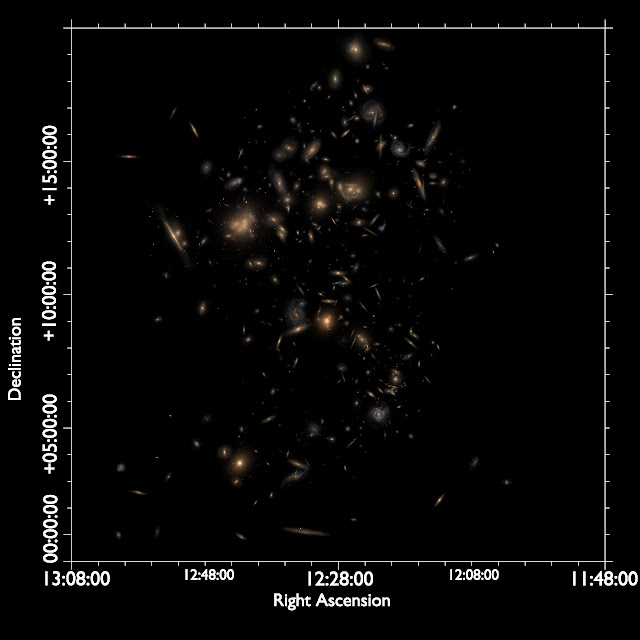 I also did some more sciency-visuals by selectively plotting different galaxies, which was quite fun to look at in 3D. I even made a 3D flythrough :


Later, I massively expanded this to show the whole ALFALFA survey of over 30,000 galaxies in VR. It was the most complex thing I've ever rendered. So with Virgo already covered in quite some detail, and an even larger data set shown in the most immersive format possible, what more is there to do ?

Like everyone else, I'm stuck at home. This has given me the chance to learn something new : interactivity.

I won't labour the details because there's not really any point. The Blend4Web addon is really very nice indeed, and just works. With largely minimal adjustments, I can easily convert my files into standalone HTML web pages that work in an ordinary browser. It even offers a VR mode, without any of the hassle of setting up special cameras and re-rendering the blasted thing. So now you don't have to see whatever I choose to render for you - you can fly around for yourself.

The controls are simple : left button drag to rotate, wheel to zoom, middle button drag to pan around. And there are some options at the bottom for headsets and full screen and so on. But what exactly are you looking at ? That's where the buttons in the upper left come in. Time for a crash course in galaxy clusters !

"ETGs" and "LTGs" refer to early-type and late-type galaxies. This extremely stupid nomenclature was devised by the fiendish mind of Edwin Hubble, apparently for the sheer joy of confusing the heck out of people. 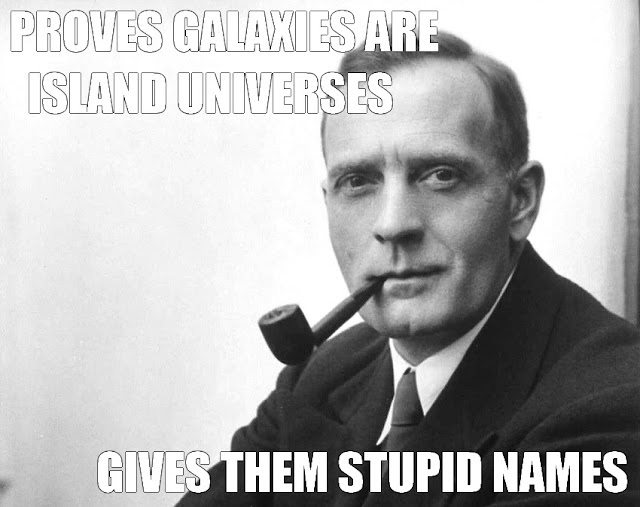 Basically, early-type galaxies are smooth, structureless, largely red objects consisting mainly of old stars. All their hot bright blue stars have long since died, leaving only the faintest but most enduring stars behind - they're often said to be "red and dead". They've usually run out of gas, so they're probably doomed to spend the rest of eternity fading into nothingness.

Late-type galaxies, however, are where it's at. They've still got loads of gas left and are actively forming hot, bright, blue stars, and usually have lots of interesting spiral and irregular structure. The day may come when they too will cease star formation, but it is not this day.

The definitions are easy enough, but why these bizarre terms ? It's often said that Hubble thought that galaxies evolved from one type to the other, but this isn't true. In a footnote in a paper he explicitly denies this, saying he's just referring to how complex the structures are, not the chronological sequence. Which makes total sense, because everyone refers to simple-looking things as "early" and complex-looking ones as "late"*... or more likely Hubble just had a mad moment. Regardless, the stupid terms (like many others in astronomy) have unfortunately stuck.

* As in, "look at this early-type fish tank" or "this late-type roof garden".

Anyway, if you toggle the ETGs and LTGs on and off, you might notice something called the morphology density relation. This just means that late-type galaxies tend to be found in less dense regions, and early-types prefer dense environments. Late-types are newcomers to the party, bringing in plenty of fresh booze but still themselves sober and hanging around cautiously on the periphery. Early-types are already utterly wasted and are buried deep in the throng.

(Or, if you want a really disturbing analogy, the youthful blue spirals are forever falling into the corpse pit of dead giants at the centre. Lovely.)

You can just about see this in the interactive display, but it's a bit clearer here :

Just why this should be is a matter of intense controversy. Does the environment set what sort of galaxies form or does it alter those that happen to fall in ? Or is it a bit of both ?

We don't know. Certainly, though, the effects of the cluster can be very powerful. Just as Big Brother is a great way to spy on people but doesn't give you a typical view of human behaviour*, so too are clusters hardly typical habitats for galaxies. Your average galaxy instead prefers to live in isolation, or perhaps a small group of a few or few tens of galaxies - not the thousands-strong hordes of a big cluster.

Truly isolated galaxies are frankly as dull as hell. Small groups, on the other hand, are surprisingly interesting. Their interactions tend to be slow, as the gravity is from only a few other galaxies. But this gives it a long time to do tremendous damage, so group galaxies often show spectacular streams of stars and gas flung out into extragalactic space.

Clusters are different. With a much greater total mass, galaxies move very much faster relative to each other, meaning that gravity has little time to do any damage. But clusters also contain something else : gas. This is not shown in the interactive tool, at least not yet, but it fills most of the cluster. Galaxies moving through this very hot, very thin intracluster medium can lose their gas through ram pressure stripping. So although long stellar tails are pretty rare in clusters, tails of gas are more common. Ram pressure can completely strip even a massive galaxy, killing its star formation and, perhaps, eventually turning a late-type spiral into a red and dead elliptical. Well, maybe.

Virgo isn't just one big group of galaxies - it's several different groups which are still in the process of assembly. I haven't shown all the groups here, just a selection of the major ones taken from this paper.

The other sub-groups (sometimes called "clouds") are much smaller than the main A cluster, but they're still large enough to have their own gas. They're effectively mini-clusters being gobbled up by the big one.

Measuring these kinds of enormous distances is tricky, and this is the main weakness of this visualisation. We can directly measure how fast a galaxy is moving towards or away from us with really quite astonishing precision, to within a 1 km/s or so. When Edwin Hubble wasn't inventing daft terminologies, he was busy quantifying how distance relates to velocity - and this seems to work very well in low-density environments. But not, unfortunately, in clusters. Here the enormous gravity overwhelms this "Hubble flow", so the velocities we measure don't bear much relation to true distances.

There are other ways to measure distance, but they're much harder and only available for a far smaller number of galaxies. So what I did here was to use the velocities as a proxy for distance and scale them so that the cluster has approximately the correct depth. This gives broadly correct results, in that you can clearly see the different clouds, but each individual galaxy is usually wrong. For example there's a famous pair of galaxies which are clearly interacting :

But you won't see this in the visualisation. Both of them are present, but the velocities of the two are quite different, making them appear much more widely separated than they really are.

The labels I chose based on some of my personal favourite galaxies in the cluster. If you click them, you'll get links to more detailed information (public outreach articles where possible, academic papers where not). Mainy of them refer to tails of gas, which I might try and add at some point in the future.

There's a total of 774 galaxies shown : 386 early-types and 388 late-types. This is a bit of a misleading view, because in reality there are a lot more ETGs than LTGs. But most of them are pathetically faint and don't have velocity measurements, so we have even less of an idea as to their distance.

Actually, it might not be so bad as that by now. I'm using the same data set as for the map I made years back, so by now we might have new data. But showing each galaxy isn't a trivial task. A lot of time and effort was spent in manually adjusting them images to make sure their size was correct and annoying artifacts and foreground stars were carefully removed. That's not a process I care to repeat, though most of the new galaxies probably wouldn't suffer from this (but, being so faint, it wouldn't make that much difference to the overall appearance of the thing anyway).

The size of the galaxies has been exaggerated by a factor of five. I wanted to make this an interactive feature where you could set the scale for yourself, but this proved difficult. Maybe I'll find a way to do this and update it as I learn more about Blend4Web, but for now, this scaling seemed to give the best balance between realism and the need to make a pretty picture.

Galaxies are also, as you can tell, rendered in the style of classic video game sprites that always point towards the camera. It should be possible to overcome this for many galaxies and give a more accurate 3D view, but I leave this for version 2.0


So that's all for now. Have fun exploring Virgo, and let me know if I've missed anything vital. There's lots more to do (more galaxies, higher resolution textures, colour correction to show the spirals better, add gas), but as a first effort I'm pretty darn pleased with this.
Posted by Rhysy at Friday, March 27, 2020