The Joy of Treks

Star Treks, that is. I don't do a lot of trekking as it brings me out in a rash. Sorry people, but I'm a nerd, and that means periodic posts where I compose laments for one of the greatest TV shows of all time. It may not have ever had the best acting, script, plot, casting, cinematography, costumes*... well you get the idea. So why should non-trekkies give a damn about a show that was once Emmy-nominated for outstanding hairstyling ?

* Except one. See below.

Right now, there's a complete dearth of inspirational sci-fi shows, and inspiration was something Trek did better than any other show ever, bar none. As the 3 excellent documentaries Trekkies, Trekkies 2 and How William Shatner Changed the World make abundantly clear, this isn't wishful thinking on the part of some loser ultra-nerds. No, it's a very correct assessment by a group of really lovely ultra-nerds. Many of them have grown up to work for NASA and some fans have dedicated their lives to living by the ethics of Star Trek. A few are even married (but as far as I know none have become renowned hairdressers).

The thing is, if you're going to aspire to the ethos of show where humanity lives in a tolerant and mostly peaceful utopia, you're hardly likely to end up as a spite-filled brutish thug. Whereas if you follow Battlestar Galactica with the same level of devotion, you'll inevitably become a serial adulterer with lifelong crippling emotional problems, a confused obsession with religion, and an inexplicable burning hatred of all toasters.
﻿﻿﻿
﻿﻿﻿
It could be worse though. A Farscape fanatic would grow up with a penchant for all things leather, wormholes and magic. Stargate would lead to a career in the army or archeology whereas aspiring to Babylon 5 or Andromeda would only lead to terrible acting skills. Firefly and Dr Who would at least instill an anti-authoritarian attitude, but both are borderline sci-fi at best. Caprica ? Alas I don't think anyone's going to plump for a career in cybernetics so they can create a killer-robot body for an emo teenage misfit genius.
﻿﻿
﻿﻿
Star Trek did two great things that few if any other shows have even bothered to imitate. Firstly, it was supremely tolerant of all colours and creeds at a time when such an attitude was needed most. Sure, the captain was a white all-American hero, though he had to wear a girdle for the safety of himself and those around him. But his crew were as ethnically diverse as the crowd at an Obama rally. A Russian navigator who was seemingly too young to be toilet trained, a Japanese sword-wielding pilot (who grew up to be George "I WILL have sex with you !" Takei), and a sexy fan-dancing black communications officer, to say nothing of the crazed Scotsman who lurked in the engine room - this was ground-breaking stuff at the time.
﻿
﻿
Of course today no-one bats an eyelid at such things. Crazed Scotsmen can now be engineers without fear of shame or lynching, and the world is better for it. By the Next Generation, society was so tolerant that it could even allow a Frenchman in charge of a largely American crew. Black people were now so accepted that by Deep Space Nine, they could be captain and people were more apt to notice their blinding white teeth and terrifying stare than their skin colour. Indeed, only the presence of a female captain in Voyager elicited any reaction from anyone at all, and that was mostly because she had a voice that sounds like she'd been eating cigarettes and washing them down with a pint of whisky every day since she was 12. 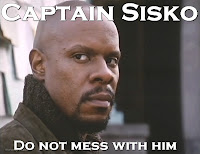 But all this contemporary social justice would have been for naught without Trek's second clever thing : making technology cool. Everyone wants a warp drive. Everyone. Well, most people. But lots of people want a teleporter and I guarantee that everyone wants a holodeck. Sadly, the recent spate of 3D movies suggest we're better off without them, as the most successful movie of all time is about a bunch of 9-foot hippie smurfs who fly around on dragons protecting trees. 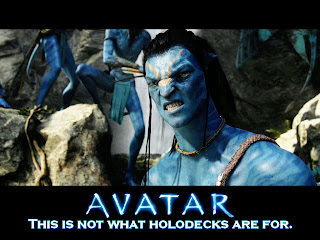 Now as I've said, no-one's going to be inspired by any of the contemporary sci-fi shows to go in for science or engineering. They're not lacking in interesting tech - Caprica had a cool take on cybernetics, but Star Trek did it better (of course, it took Trek a few goes before it stumbled upon the delectable Jeri Ryan and made everyone - ahem - happy*). The problem is that since Stargate Atlantis was cancelled, with only Caprica and the quite awful Stargate Universe left, it's nothing but bloody angst-in-space. Ain't no-one gonna work for NASA or get married (or even become a hairdresser) because of some show about teenagers moping around on a dark and dingy spaceship who spend their entire time whining that they can't get onto Facebook and that their iPhone's can't get a signal.

* Yes alright, Battlestar had Caprica 6, but she was a genocidal maniac. It'd be like doing Hitler, you sick freak.

Sure, there's a place for darker and more grown-up sci-fi. But can't we also have something where the future doesn't involve the Earth blowing up and everyone whinging about it ? Something where we venture into space and don't find 700 billion angry aliens trying to enslave us ? Or even something about a future in which humanity is not oppressed by armies of killer robots ? Call me crazy, but I think it's actually a lot easier to create a helpful robot monkey butler than it is to create an army of super-powerful robot killing machines possessed by the ghosts of teenage emo kids.

It doesn't even have to be Star Trek again. I just want a sci-fi show where the underlying message is not one of such complete doom that I feel like giving up and going to read the Daily Mail. That's not too much to ask, is it ?
Posted by Rhysy at Thursday, February 10, 2011