I've Got Me A House

At last I have escaped the clutches of my small wooden hut. Instead, I now live in a small concrete bunker. It's orange. That's the usual style of building over here - build concrete cubes and paint them in bright colours. I don't have a front door key yet, so I have to scramble up the narrow back steps and squeeze in through the back door (naturally, it opens outwards and it just slightly wider than the steps). 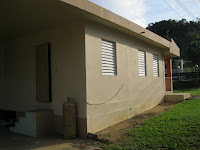 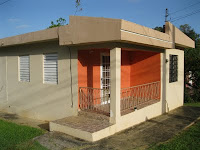 OK, it's only a little bit orange. And it's not even that small, just compact. It has all the rooms you'd need (bedroom, living room, kitchen, bathroom, spare room) just stuck together without any unnecessary corridors to get in the way. The rooms themselves are not that much smaller than those back home, if at all. 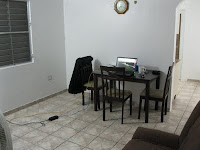 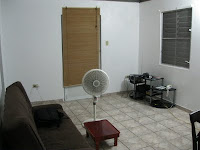 I chose this one for many reasons, mainly because it's fully furnished - the previous incumbent having had to unexpectedly depart for personal reasons and left all their stuff behind. It's also extremely conveniently situated about 10 minutes drive from work (and 15 minutes from shops) in a small village heavily populated with astronomers, easily availing me of car pooling.

Thus I begin living in Puerto Rico proper, as opposed to the Observatory which is (almost) an entirely different place. For starters, astronomers do not generally get up at 6am. It seems that the only reason the locals do this is because it's vitally important that they ensure their dogs bark as loudly as possible, in order to wake up the chickens so that the roosters will crow on time. Otherwise, how would anyone else know it's time to get up ?

At least I've escaped the night-time screeching of the coquis, for the most part. I planned to offset the early morning noise by staying up late and playing loud classical music to annoy the neighbours, but  this probably won't work. This morning I was greeted by the strains of Pie Jesu on one side and some unknown opera on the other. So I suppose that if I want to annoy my neighbours I'll have to either get up even earlier than them - which would defeat the purpose - or play loud rock music, which would also defeat the purpose. Dang.
﻿
* Is it wise to post pictures of my house on the internet ? Yes. It's not as if I can post my address even if I wanted to, not because I don't know it but because there isn't one. In complete contrast with the U.K., a street address is a privilege here, not a right that's assigned to every building automatically. It would be possible to get one, but hardly worth the effort. Even people who've lived here 20 years get all their stuff delivered to work.
﻿
Certainly, though, I've escaped the increasingly annoying squeaky floorboards. From here on in it's good solid tiles for me. Since everything is painted white, I've also escaped the gloom of the visitor's hut. Indeed, the abundance of daylight is currently a problem as I am awoken each morning by a combination of noise and blinding light. Noise can be mitigated by a fan to replace the other noises with a relatively pleasant droning sound. But currently, the only thing reducing the light is a paper-thin white curtain.

I can slowly begin to accept the previous resident's lack of air conditioning. The lack of a blackout curtain - which I have already remedied via Amazon - is perhaps understandable given the presence of a small child, who might wake up early anyway. But the lack of some other stuff is just bewildering. For instance, how can you live anywhere for 6 months without a bathroom mirror ? Or oven trays ? I had to cook chips in a cake tin because that's all there is.  Or a towel rack ? There's hundreds of towels, but nowhere to hang them. I don't get it.

Particularly odd is the lack of a cutlery draw. When I arrived, everything was in storage, so I've no idea how they managed. I make do by leaving everything in the draining rack - it's this or put it all loose in a draw. There are also no teaspoons, only sporks. They're very nice sporks, but still, they're not teaspoons.
﻿
﻿Oh well. Sunday saw a procession of people leave this little complex in a slow but stately march off to church, or at least I assume it was church. I don't know of any other force powerful enough to compel people to wear the whole shirt/tie/trousers thing in this heat, and then walk around in it. They even wore hats ! Hats ! In 30 degree heat ! Was the 11th commandment, "Thou shalt dress smartly even if it is hot, lest I should smite thee with rabies" ? Crazy people.

That's it for my house-related shennanigans. Next up : finally getting a social security number. And then a bank account.... then many, many, extremely shiny things, like a car.
Posted by Rhysy at Monday, April 11, 2011