What the tourists don't see (II)

As promised here is my second exclusive, behind-the-scenes look at the NAIC. Previously I ventured into the control room and revealed that is NOT a supervillain's underground lair, much to everyone's disappointment. I also almost completely ignored the enormous dish that defines the whole place, so it's time to rectify that and also, unfortunately, end some more Bond myths.

However, I'm going to start on a much happier note by saying that Bond actually got something right ! Well, near enough anyway. OK, it isn't used to control an orbiting satellite that can electrify entire cities. But it is a bona fide death ray. Umm.... well, only if you're standing in just the right spot, which is about 30cm across and inside the dome, which is 120m up in the air, and only when the radar is working (which is not often) but that's not the point !

Anyway, that's as close as the Goldeneye came to reality, which is not saying very much but never mind. Having finally had the time, inclination and most importantly camera about my person, it's time to share what's beyond the "no unauthorised personnel" signs once again. Unlike last time, there aren't even any lockless gates to open, because hurting a 300m diameter telescope is quite a difficult thing to do*.

* Although the anchor points from the towers are very well protect by with gates, barbed wire, security cameras and really steep hills.

First up is the ground screen. This is is a 15m high fence filled with a fine wire mesh (that doesn't photograph well) running around the full 1km circumference of the dish. The purpose of this circumfence is to make sure the instruments on the platform are never aimed at the ground itself, because trying to observe the ground won't work, otherwise no-one would have bothered building the dish. Having a giant fence means that even at their greatest elevation, the instruments are always pointed at nice shiny metal reflecting the cold sky rather than the hot ground. 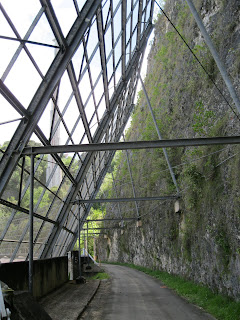 There's nothing very interesting around the dish but numerous side-roads lead to all kinds of crazy places, like the deprecated helipad and the three support towers. From a distance these can look thin and spindly, but that's only because they're extremely tall. They're actually bloomin' massive. 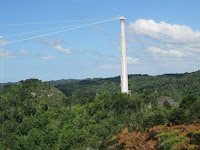 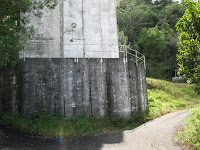 I thought I'd long since explored all of the funny side-roads but it turns out I was wrong. I'd missed the one with the best view of all, from which nothing is visible except endless jungle with a river in it. Unfortunately no-one was around to sing the Jurassic Park theme with, which made the trek up in the baking heat a colossal waste of time. 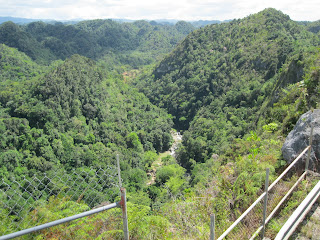 Then of course there's today's main feature : underneath the dish, which is about as surreal and unique a place as it's possible to find anywhere. It's even less like the Bond movie than the control room. For starters, the telescope does not hide from passing spy satellites by submerging, which would be very difficult to do because it's not made of concrete and we couldn't afford the electric bills anyway. Nor are the three support towers retractable, which makes them less dramatic but slightly more practical. All the telescope does is sit there, like a big fact lemon. Occasionally, the platform rotates very slowly. And no, I haven't seen anyone from the British government come in all guns blazing in a desperate bid to shut us down (but probably they're all at the wedding anyway).

In fact the dish is made of many thousands of aluminium (no, NOT "aluminum", damn yanks) panels and weighs about 300 tonnes. These are a lot like the panels in a microwave oven - perforated by lots of little holes that are too small to let any important radiation through. So, although it looks perfectly solid from above, from below it's quite transparent. 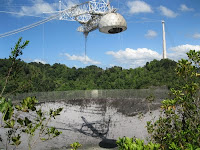 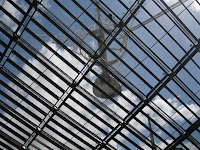 Surprisingly, not only does the dish not double as a small water-sports center, but they don't even let you slide down it. I imagine that this is because there's nothing to stop you falling through the hole in the bottom, unlike in the Bond movie where there was a handy concrete lip that stopped our plucky protagonists from falling into an uncertain death. Certainly it cannot relate to such activities interfering with observations.

The underside of the dish is indeed an unworldly place. The structure of the dish is clearly visible thanks to the girders between each of the panels which trace neat, continuous arcs overhead. The dish is held under tension (it helps beat thermal expansion) by thousands of cables. It's also stained reddish-brown, so the whole place has a weird sense of industrial grace. 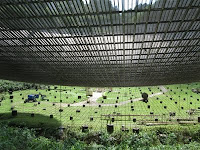 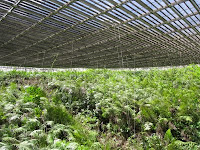 The cables are attached to large concrete cylinders. Surrounding the central flat area, which contains a few small engineering huts for maintenance, is a large drainage ditch into which run many artificial channels. There are also a few abandoned line feeds which used to hang up on the telescope. The place just screams Half-Life 2 mod. 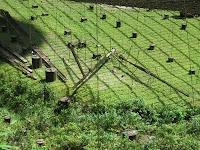 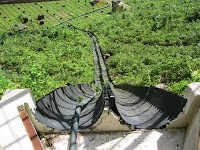 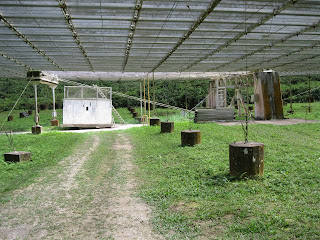 Which brings me to the end of this second venture into the Forbidden Zones. The last picture shows the very center of the dish, which does indeed have a great big hole as in the Bond film, but this is only to allow stuff to be hoisted up to the platform. Sadly there is no great drain that would explain where the water could go if the telescope could submerge, and don't think I haven't looked. Goldeneye was simply not the insightful, intelligent documentary it claimed to be.
Posted by Rhysy at Wednesday, April 27, 2011