Hwyl fawr, myfywyr ! Before the REU students left I felt it my duty to give them a crash course in Welsh, should they ever find themselves stranded in Northern Patagonia or even the Welsh homeland itself. Consequently they are now engendered with such choice phrases as :


"Welcome to the Arecibo Observatory and Welsh Language Emporium"
"Goodbye summer students"
"The summer was awesome"
"I like Arecibo"
"Is this a camel ?"
"Where is Wales ?"
"Yes ! This is a camel !"
"Awesome sea turtle"
"My name is Carlos"
"They should have sent a poet !" 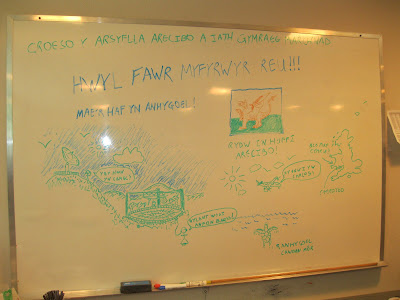 I suppose one could argue that a crash course in Spanish by a fluent Spanish speaker at the start of the summer would have been marginally more useful than, say, a crash course in Welsh by someone who hasn't spoken it since age 13 and actively dislikes the language at the end of the summer. Bah. I care not for such inconsequential details. In fact, maybe next year I'll schedule it as an official REU talk... it's only a mercy there are no other Welsh speakers able to lambast my sbwriel pronunciations.

All of which doesn't help solve my current conundrum one little bit, namely, why isn't Middle Earth overrun with elves ? Wait ! No, that was last night's problem, and probably a filler post for the next time I'm really bored. Which brings me nicely to my real problem, to wit, what to do with this blog. Pretty much all of my pictures are on Google+, so reproducing them here, while extremely easy, is also really boring.

On the other hand, Google+ doesn't have my cool pirate Einstein to keep an eye on things, or my highly witty banner picture of Johnny Depp calmly surveying the sea for rogue astronomers. So, without further ado, the US Virgin Islands* ! I went to St John last weekend and wish I'd stayed. You know a trip's going to be good when you charter a light aircraft and your pilot turns out to be a former theoretical cosmologist from MIT by the name of Carlos. And then when your villa has a pool with a sea view, things can't go far wrong.

* These statements are not unconnected. The VI's are much more touristy, proper Caribbean places than Puerto Rico, so pirate regalia can be found everywhere. 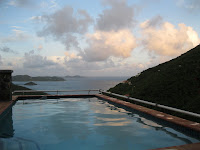 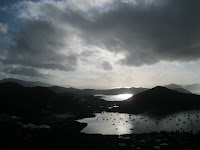 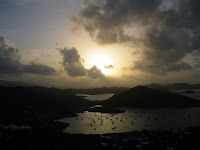 Yes, those photos are all of the same view. That's because it's an extremely good view. It's all the better for being slightly cooler and MUCH less humid than the relative hell-hole that is Puerto Rico. Once again a visit to a civilised part of the world has kindled a deep desire to return home, particularly as I saw the little-known US-UK border (it's in between the US and UK Virgin Islands). They also drive on the left in the USVI, since it used to be Danish. I can only assume the Danes abandoned it due to the lack of icebergs and polar bears. Such is my extensive knowledge of Denmark...

At this point I require an underwater camera, on account of the VI's best feature : sea turtles. Why, in some beaches you can hardly move for turtles. You can reach out and touch them, and they don't react. Well, probably they do if you jab them in the eye or tap them on the nose with a rolled-up newspaper, but fortunately they're surprisingly fast so those things are quite difficult to do.

I could wax lyrical about the wonders of the USVI, but instead I'll just recommend that the entire world visit it at once, be nice to the turtles (or I will destroy you) and don't try to fit 8 people in a Jeep designed to hold 5, it's not much fun. And definitely don't try to do so in front of the owner.
Posted by Rhysy at Monday, August 08, 2011