He Tells Me To Burn Things

Will someone PLEASE tell me why England burned down last week ? And, equally importantly, why didn't Scotland or Wales or even Northern Ireland ? While the media may be keen to repeatedly divulge that these were the worst riots since the 1980's, they're less keen to report that these riots are so perplexing they'll soon become a regular clue in the Daily Mail's Cryptic Crossword.

It's not quite that no explanations are being offered. It's just that all of the so-called causes stink to high heaven of people promoting their own personal pet hates. Come on, people. The moral breakdown of society has been blamed for everything from the fall of Rome to the sinking of the Titanic (probably). Good grief, if the moral breakdown of society had been continuing for as long as it's been claimed, by now we'd be little better than those awful zombie creatures in I Am Legend.

Even that normally quintessentially analytical paper, The Independent, is offering few explanations. Oh, it did try, once, but it used so many long words in such flowing and flowery language that I was sorely put upon to constrain the electrochemical process dwelling within my cerebral cortex toward the notional concept that the rioters might actually think that way. Heck, if an article attempting to explain why people burn things requires annotations, then I'm just not convinced.

Reactions to how to deal with the rioters seem as irrational as not bothering to examine the root causes. For starters, Our Glorious Headteacher (David Cameron) seems convinced that the entire thing was put about by naughty children and is desperately trying to deal with them as only a Tory would - i.e. with water cannon and plastic bullets. That's perfectly understandable. After all, he's a Tory, and therefore mad.

Maybe there was a large youth contingent involved, I don't know. But reading the newspaper reports it seems to me the rioters are dominated by Club 18-30. And given that one of the first convictions handed out was to a 31 year old teacher, I can't help but feel the political bandwagons have been set loose like fire-and-forget missiles, only someone forgot what the target was before even launching.

The phrase "knee-jerk" falls short of describing many of the reactions to the crisis. One man was jailed for stealing water worth the princely sum of £3.50. A 22 year old model ("of previous good character") was jailed for 6 months for stealing 10 packs of chewing gum. Eh ? Did I just wake up one morning and find myself transported back in time to 1851 ? Perhaps she should also be flogged and deported to Australia, just to be on the safe side ? God help us all if she decides to do it again. IS NO-ONE SAFE FROM THIS TERRIBLE GUM THIEF ?!?!

One can't help but imagine the future of that 22 year old. Years from now, she'll tell her grandchildren of the riots. She'll tell them of how whole shopping centres were burned to the ground, how people stole from the injured and attacked the police and even firefighters. And then she'll finish by telling them she was so out of control that she broke into Argos and stole some gum, and that no-one would ever again employ her because her "good character" was damaged irreparably.

One marginally more serious case concerns a looter who stole £50 from a charity box. OK, that's pretty bad, and certainly deserves a sharp slap on the wrist and a hefty fine. But is it really, "an act of breathtaking wickedness.... contemptible and despicable" as the judge called it ? Contemptible and despicable maybe, but "breathtaking wickedness" is the sort of term I feel should be reserved for Nazi Germany, Vlad the Impaler, and - on a bad day - Peppa Pig. 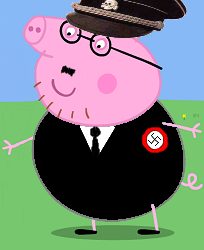 So what have we learned from this whole escapade ? Not a damned thing, apparently. Unfortunately, a magical pyromaniacal leprechaun remains the best explanation for the whole sorry business. He appears to be using his magical powers to lay low and avoid interviews, so we're not likely to find out any more details for quite some time.
Posted by Rhysy at Sunday, August 14, 2011