Humans are a lot like magpies - we all like shiny things. That explains a great deal about modern civilization, like impulse buying and the otherwise inexcusable popularity of Baywatch. It also means that the obscene beauty of spiral galaxies makes them the prom kings and queens of the Universe, with about 9 million results on Google.

Dwarf galaxies, unlike Tyrion Lannister, are nowhere near as popular, with a mere 1.9 million results. And gosh darn it, that's just not fair. Dwarf galaxies are, if anything, even more bloody spectacular than their more popular bloated cousins. Here's a chart of some selected dwarf galaxies, all shown to the same scale. At this size, our own MIlky Way galaxy would fill the image completely (but we'll get to that in a minute).

I'm using "dwarf" in a very liberal sense to mean anything about half the diameter of the Milky Way or less. This is a very fast-and-loose approach. Astronomers generally go by by brightness rather than physical size. The Sombreo galaxy and M33 aren't usually classified as dwarfs, though they're definitely on the small size. M82, though less than half the diameter of the Milky Way, is actually 5 times brighter, and forming stars more than 10x faster than our own galaxy.


Actually, before we go any further, anyone who missed the previous chart should go and look at it at once. Otherwise, there's a danger you'll end up thinking that our own Milky Way is a real giant, when in fact it's (at best) a bit big for a spiral, but nowhere near the largest of any variety.

I've also been somewhat liberal in including Hanny's Voorwerp, but someone requested it in response to the previous chart (for which it was too small). This extraordinary object defies normal classification. Normally galaxies are either spirals, ellipticals (smooth spheroids) or somewhat irregular. Irregular generally means a pretty diffuse mass of stars with maybe some signs of a disc. It isn't supposed to mean anything like this :

The Voorwerp is the mass of glowing green tendrils. I won't go into details (there are many excellent articles about this already) but the current theory is it's the shredded remains of a small galaxy which got ripped apart in an encounter with the large spiral, and is now shining by the light of material falling into a supermassive black hole at the heart of the spiral. Which is pretty epic.

The Voorwerp is a pretty large structure, a good fraction of the size of the Milky Way. Most of it is very faint though, which is why it doesn't appear to fill the whole chart. The smallest object shown is 1 Zwicky 18, and it is also (I think) one of the most beautiful. This isn't the smallest galaxy known by any means, but at a mere 5,000 light years across, it's barely 1/20th the size of the Milky Way.

1 Zwicky 18 (don't ask me why it hasn't got a better name yet) is more than a superficial poster pin-up, although I'll admit that's why it sprang to mind. For a long time, it was thought to be the youngest galaxy known. Somehow, it seemed that 1Z18 had managed to avoid turning any of its gas into stars until about 500 million years ago (whereas every other galaxy has at least some stars that are ~10 billion years old). Not so long ago, older stars were discovered - but it's still a mystery how it managed to avoid forming most of them until recently.

Which leads us neatly to Arp 133, "Minkowski's Object". By itself, this looks quite typical of a dwarf galaxy. But zoom out a bit and it's obvious that this is rather more unusual. 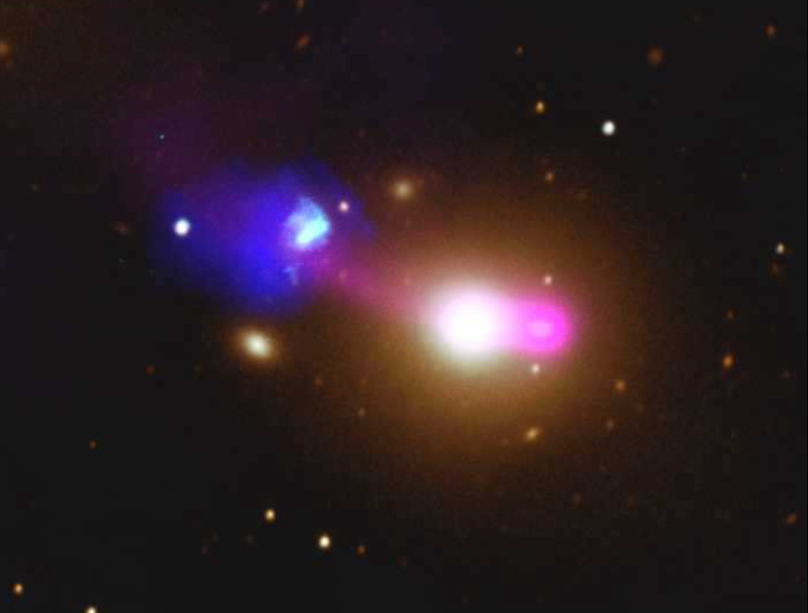 Arp 133 is the thing left of center. Pale blue shows where stars are forming, while darker blue shows the gas content. Pink indicates radio emission, which in this case is coming in a jet from a nearby elliptical galaxy (reddish object, right of center). For the lowdown on Arp 133, I recommend this article, but it's such a wonderful object that I'd feel guilty if I didn't try and summarise.

Like 1ZW18, Arp 133 is mostly made of young stars. Unlike 1ZW18, it's being full-on punched in the face by a jet of plasma moving at near-light speeds coming from a supermassive black hole in the nearby galaxy. In the face of this onslaught, the gas is losing - it's being compressed, which is perfect for star formation. In cosmic terms this has all happened very, very recently, probably not more than about 10 million years ago, according to a paper by Steve Croft. Although there's some margin of error, it appears that this.... thing... really doesn't have any old stars at all. Which raises just one question :

Why wasn't I told about this before ?!?!

Seriously, this is an amazing object. I read the whole of Croft's 52-page paper, I was so impressed. Somehow, it seems that a cloud of gas has survived (quite literally) since the beginning of time and is only now - right now - bothering to form stars.

Is it truly a new galaxy ? Don't know. All I know is that my colleagues ought to be ashamed of themselves for not telling me about this on day one. And day two. And also days three, four, five and possibly a whole lot more, just to make sure I wouldn't forget.

Anyway, I shall round up this parade of little galaxies with a reminder of just how small they all are. Here's the whole bunch compared to our own Milky Way :