Tired of Prague ? Searching for something more exotic and crazy in the Czech Republic, filled with thrills, spills, dangerous monsters and death-defying escapades ? Well you won't find any in the sleepy town of Cesky Krumlov, a tiny medieval place about a hundred miles south of Prague, near the Austrian border. What you will find is a pretty little town that's a pleasant diversion for a weekend.

It takes almost exactly two hours to get to Cesky Krumlov ("Czech Crumb Love" - no not really) by car or about two days by foot. It's your choice, I'm not judging. How long it takes by balloon or camel is left as an exercise to the reader.

We stayed in this nice little B&B, which finally answers a long-standing mystery : why I keep seeing the word "penzion" everywhere. It turns out the Czech Republic is not overflowing with pension-collection centres, but guesthouses. I suppose that's more logical. 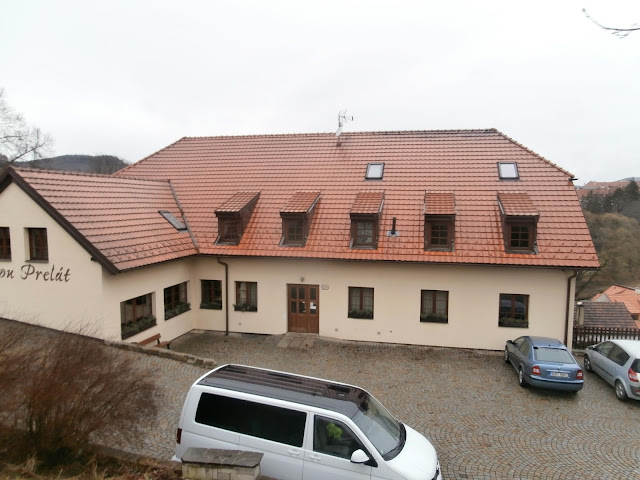 Although it was out of season and the weather was bad, this place was fully booked. Czechy Kelvin-Helmholtz is a popular place, so book in advance. Everyone else thought the guesthouse was "OK, not great", though personally I give it massive brownie points for having an exceptionally comfortable bed. I usually sleep extremely badly anywhere new, but not here.

Mind you, that might have had something to do with the excessive amount of walking. First we walked into the centre of town...

... which is a pretty little place, even in the damp and somewhat miserable weather. 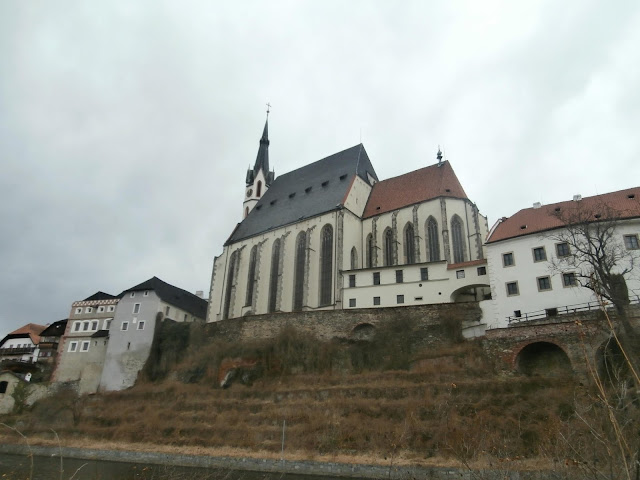 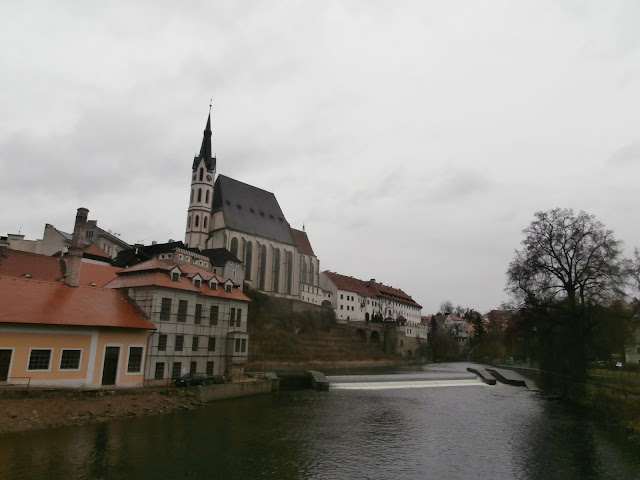 Checky Krum Lust really is tiny, you could walk from one side to the other in half an hour. But if you go around all the streets and visit the many and various museums, you can easily spend all day on your feet. Which we did. But that's OK, considering how many weekends I spend watching Netflix.

We began with the town's main attraction, since during the low season it's not fully open and even then it's only open for limited hours : the rather fine castle. This is an impressive castle-palace with an extremely dramatic multi-level arched bridged linking two enclosures on different hills. 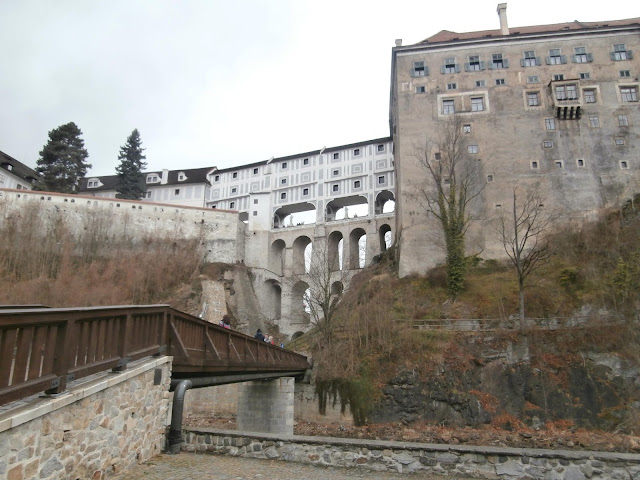 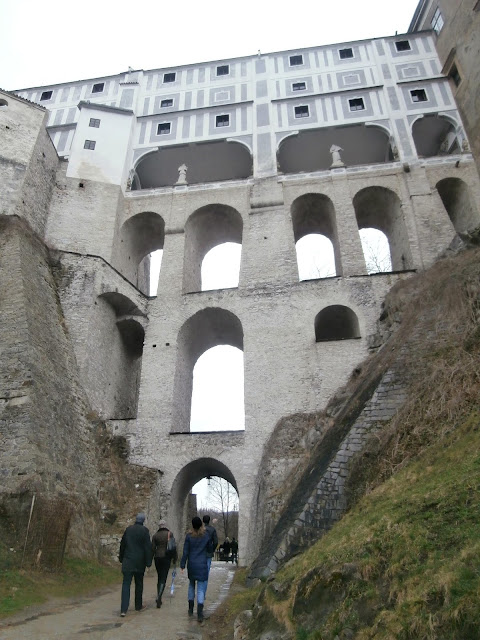 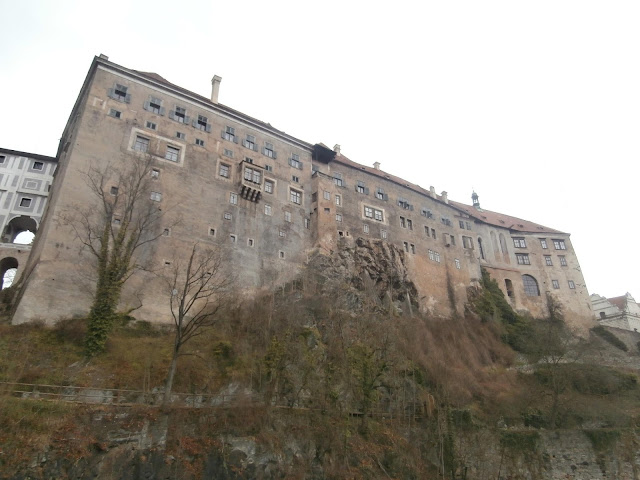 The castle itself is imposing but not spectacular from below. Like many Czech castles (not including Karl's Stein), it doesn't really look like a castle except in a few isolated areas. It's hard to get a sense of the layout of it even from its interior, though a model in the museum (one of only two parts we could visit) makes it clear that this was a huge fortified area - and definitely a proper, fighting castle, not the fortified palace it appears today.

The museum is good, and quite extensive, though the focus is on the latter stages of the castle as a palace. The other part we visited was the impressive baroque tower, which has a suitably commanding view over the whole town. 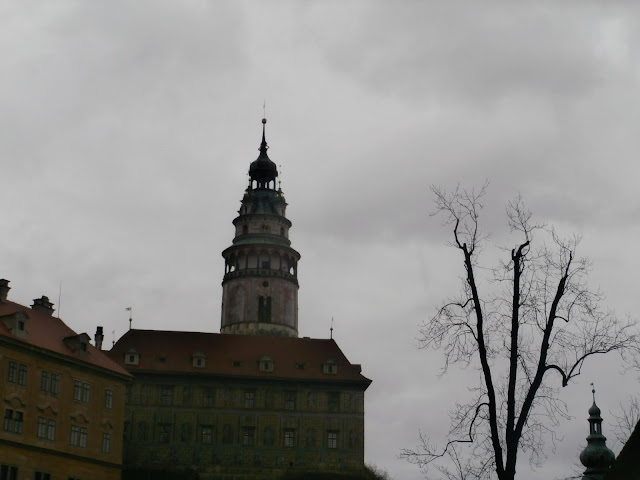 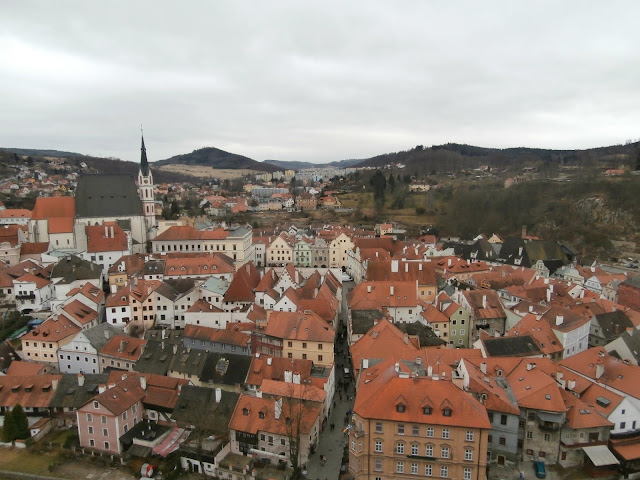 After that we went for lunch in a nice restaurant where the food was overpriced and there was a problem with every single order except mine. You win some, you lose some... I suppose that's the compensation I get for being the only single person in a group of nine.

Then we went to a bunch of museums. I forget the order, but there was the torture museum (very silly and the scariest thing was the noise the rotating gate makes), the mirror maze (not bad, actually), and the moldavites museum.

Moldavities are a very interesting and rare form of glass, formed by meteor impacts. The museum was fun, though for all the wrong reasons, with the very first explanatory panel opening with the memorable line, "65 million years ago, the dinosaurs had a bad day." The short video was probably better suited to astrologers than astronomers, narrated by a strange man describing how touching the moldavites made him feel their "cosmic energy" and gave him a "Buddhist attitude". There was also an interactive impact simulator where you use your hands to set the size of the asteroid and hurl it towards the Earth. It didn't work very well, and when it did it gave very inconsistent results. Sometimes the asteroid explodes in the atmosphere yet causes massive ecological damage, sometimes it impacts the ground and causes a massive crater but no burning. Very mysterious.

Then there was even more walking and nice views of Chicky Camelot until we all decided it was time to collapse. 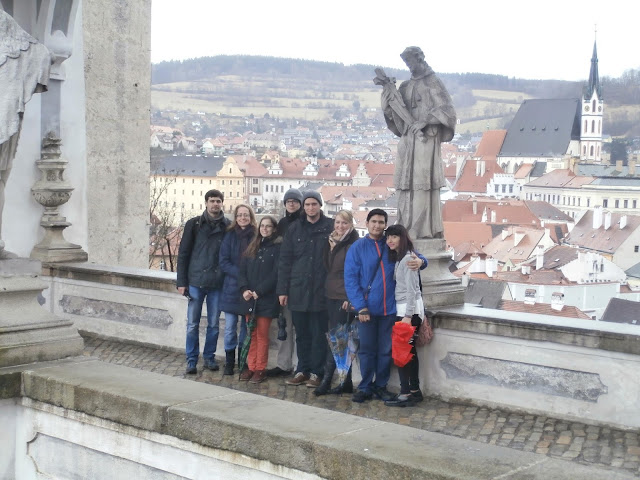 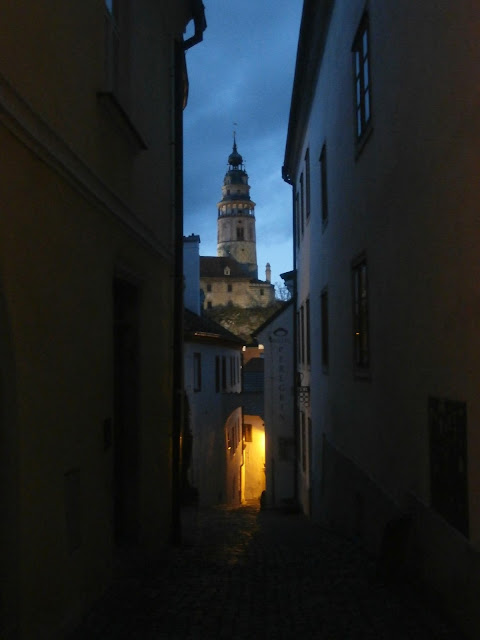 The next day we left Chucky Krumloops for a nearby castle which I can't remember the name of because, unusually in Czech, it's got too many vowels. This castle also had a genuine medieval history, but it suffered from reconstruction (not restoration) much later, so the modern thing is very nice but little more than a fantasy stately home. 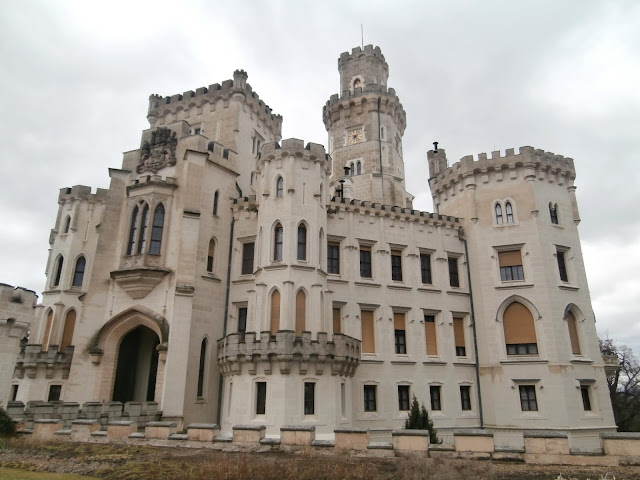 This castle was open, but because of the low season the tours were only in Czech with English printouts. On the slightly positive side, we got free entry into an art gallery. I'm not a big fan of art galleries, but this one, it must be said, was exactly the same as all the others. Lots of paintings and sculptures which you walk around thinking, "yes, that's definitely a painting" or more analytically, "well I wouldn't want that on my wall." I really don't get it.

The first level of the gallery was by far the worst. It had a nice enough opening quote by someone, explaining that only the audience can bestow meaning on the art. That's reasonable enough I suppose, but it seemed to me an excuse to justify putting a stick in some concrete and calling it art without any explanation. It was really all that I hate most about modern "art", little more than pretentious twaddle that probably earned some pot-smoking layabout enough money to make a Faberge egg omelette, or something. At least give me some description of what in God's name the artist was thinking so I can rant loudly about how, "Well I don't think much of that ! Doesn't look much like a commentary on socioeconomic policy in Aztec Mexico to me !". Instead I just had to endure a lengthy series of meaningless nonsense, reading the labels for lack of anything better to do.

The second level was slightly better, though what it God's name the artist was thinking here was all too clear : God. Well, at least the paintings and sculptures looked like what they were trying to imitate. But how many identical sculptures of Christ being brutally crucified (sometimes very graphically) do we really need ? Do we really need yet another identical painting of the adoration of the Magi ?

If only the artists from galleries one and two had met, they might have learned something from each other. The modern ones would have discovered some technical skill beyond finger-painting, and the medieval ones would have had a good dose of surrealism. The Adoration of the Magi with a Happy Shark. Jesus dying on the cross but someone shouting in a speech bubble, "He's only MOSTLY dead !". Anything would be better than a dreary series of identicalness that turn the so-called Greatest Story Ever Told into The Most Uninteresting Sequence Of Depictions You'll Ever See.

The third level, impressionism, was much better. Here there was some remarkable technical skill of conveying detail and realistic lighting while painting the sort of brush stroke a 5 year old would feel ashamed of. And they look nice dammit. OK, none of them were particularly provocative or anything, but who cares ? None of the other paintings were either clever or looked nice. And dammit, I think nice-looking paintings are a darn sight better than all those stupid ones of tins of soup or Christ spilling his guts all over the place.

After enduring this strenuous ordeal, the day concluded with the tour of the castle. This wasn't bad considering it was all in Czech, but I came away with the distinct impression that the owner was a complete deranged psychopath who must have really hated deer. Stone animal heads festoon the exterior, real ones cover every square inch of the interior that's not plastered with firearms. 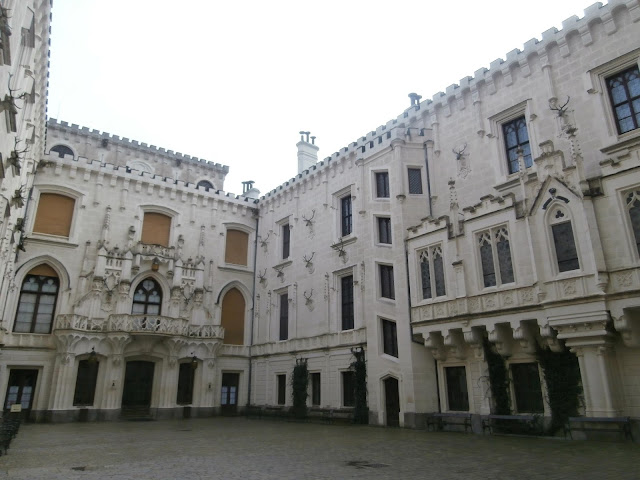 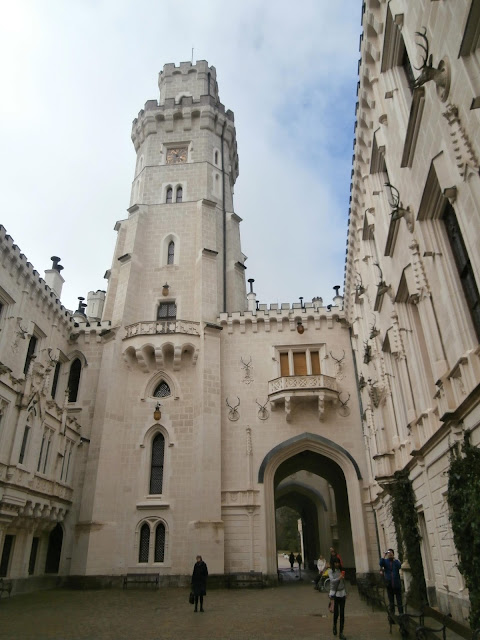 I know that this was a different age when animal rights meant little, and it was all jolly good fun to take the young 'un's out to blast the wilderness into oblivion (literally - they had children's hunting rifles), but this guy was pathologically obsessed. Even the ladies rooms were plastered wall-to-wall with assorted guns. The interior designer's instructions must've been something like, "I want to be no more than two arm length's away from the nearest firearm at all times, in case a deer suddenly appears and I have to shoot it. Did I ever tell you about that time a deer tried to ravage my wife ?! Nasty little devils, deer. Almost as bad as foreigners. Can't trust 'em. Gotta shoot 'em sixteen times to make sure they're dead. Sixteen ! Yes. What was I saying ? That's right, shooting foreigners. Now, the thing about foreigners is..."

Then we escaped the Deer Extermination Centre, had a a very late lunch, and went home. And everyone lived happily ever after, except for the deer because they were all dead. 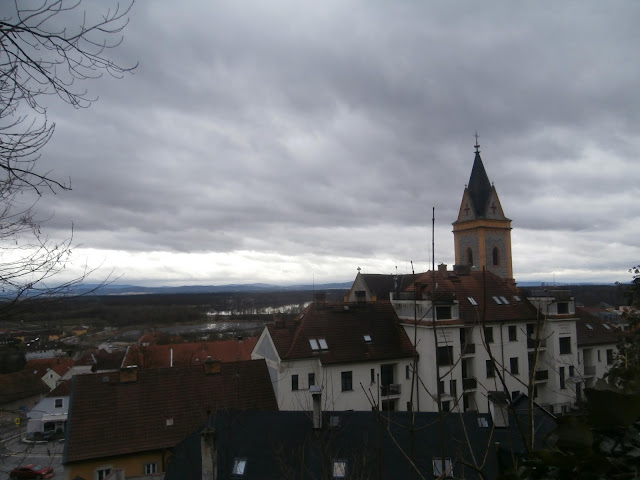