I was walking around the other day, an unusual activity in these troubled times, when for no particular reason a half-read Quora answer popped into my head. It was something about whether Game of Thrones is high fantasy or not. The answer mentioned that the amount of magic has nothing to do with it, which I thought was a bit odd and I hadn't bothered to read any further.

What struck me was that it might be exactly wrong. If we invert this, we might get a useful definition of what science fiction and fantasy is all at the same time. And surely we ought to be able to do better than Arthur C. Clarke's (or was it Asimov ?) "I know it when I see it". Because, given the current crises, it's very important indeed to think about things which are of no importance whatsoever. Otherwise we'll all go Stark (see what I did there ?) raving mad.

Here's my suggestion. Both sci-fi and fantasy are speculative fiction, where something about reality is fundamentally different to our own. If it's a plausible difference then it's science fiction. If it's not, then it's fantasy.

Perhaps "plausibility" is too limiting though. I'd say that things based on essentially sound scientific principles, albeit often with exaggeration, or exploring concepts which are scientific in nature, are generally sci-fi, not fantasy. This even extends to postulating deliberately fictional science : what if the Planck number was much bigger, what if gravity could be controlled, what if we could warp space with unobtainium, etc. It doesn't necessarily mean that the science has to be accurate (although that always helps), just that the modification has to be about science.

Fantasy is when the modification is about something actually incompatible with science. A story about the Sun going nova is definitely science fiction even though we know that's impossible, because it's still about science, but a story in which the Sun is actually a fire pushed across the sky by a surprisingly fire-retardant scarab beetle is fantasy. Science fiction generally requires altering the laws of physics, fantasy requires we do away with them. That's what I mean by "plausible".

Judging whether something is hard sci-fi or space opera, high fantasy or escapism, is easier. It's not exactly "how much magic there is", but neither does it have anything to do with anything as mundane as the location of the events (as is the usual definition of "high fantasy"). Instead, I suggest it's about how important the speculative aspect is to the story. Could just be one crucial difference, could be lots of little things - importance neatly subsumes all that ugly mess into one nice happy parameter.

So : if a story is fundamentally driven even by a single but absolutely essential difference to reality, then it's deep in the genre of speculative fiction. If it's of only a minor element, and actually most of the story is about character interaction (whether on a spaceship or in pseudo-medieval Europe), then it isn't. This, I think, is much more consistent than the usual definition that "high fantasy is not set on Earth". And everyone loves consistency, apart from Michael Bay fans and Trump supporters, of course.

Lets explore this with a handy four-way chart : 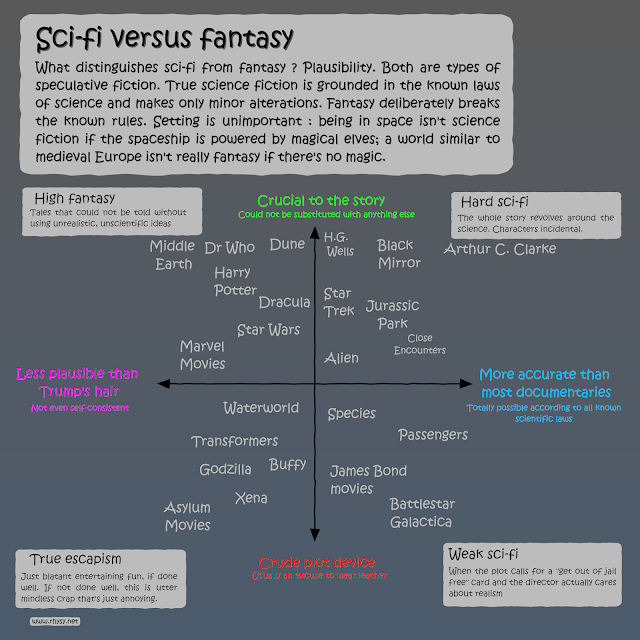 Now obviously there are grey areas and lots of subjectivity here. After all, most sci-fi doesn't try to get everything right, and most fantasy contains at least a few aspects of reality : very few novels feature humans which are two hundred feet tall and made of socks, for example.

It's usually easy to see if the modification was about a scientific concept or not. Deciding how crucial that is to the story is much more difficult. In principle, for instance, one could have the story of St. George and the Big Crocodile*, but this would hardly have the same mythological overtones. The change would matter, but in a way that's very hard to define. Even in really deep stuff, one can always argue that it's really about characters and their interactions, that some more plausible substitute could be devised to tell the same tale**. So yes, there's a good deal of subjectivity here, but you can't replace everything. Sometimes the speculative element is absolutely crucial.

* Or St George and the Surprisingly Small Lizard in the case of the Czech Republic.
** A friend of mine was once asked to say what "Aliens" was about. She said "motherhood".

It's probably time to go through the different quadrants of the chart.

This is when the speculative element is definitely scientific, basically plausible (in the sense discussed earlier), and dominates the plot line. Only very realistic works in which the science is absolutely integral to the plot deserve the label of hard sci-fi though : basically anything by Clarke, Baxter and Asimov (among many others).

Hard sci-fi is a wonderful mechanism for exploring how humanity would change if given access to radically different technologies and/or knowledge. The science may matter more than individual characters, but this doesn't prohibit such works from examining entire societies. For example The Time Machine, : never mind the time travel, the story is driven by the principles of evolution creating two human species, along with a stonkingly good social commentary.

In contrast the bulk of more popular sci-fi doesn't have such-far reaching epic consequences. Stargate has a thoroughly sci-fi device but keeps it secret, so that the consequences for humanity are never really exploited; the first Jurassic Park movie similarly places heavy restrictions on the impact of genetic engineering (though the book has somewhat broader, if subtler, comments). The science does matter in these stories : Jurassic Park is fundamentally about genetic engineering, not sexism in survival situations. But individual characters play a much greater role than in the hardcore stuff. The full implications of the speculative science are not fully played out, and its importance to the story diminished. You could change the xenomorph to a completely different monster without many serious changes to the story at all, although if you did that I would have to hurt you.

A.k.a "space opera", though not all sci-fi is set in space. Soft sci-fi is probably a much better term, but too late did I realise this to alter anything.

The lower right section is especially sparsely populated : it's pretty rare, but it is possible to have realistic sci-fi elements in a story that don't actually contribute much. The rebooted Battlestar Galactica is a good example of this. Sure, it has sci-fi elements, some of which are crucial (especially later on), but the majority of it is contemporary American politics that's been shot back in time and into outer space. It's not that the science doesn't matter at all, just that it doesn't matter anywhere near as much as the characters, politics, presence of hot people, etc. depending on the story.

Some other media also features the occasional sci-fi element that can be vaguely plausible (i.e. not violating the laws of physics, but often breaking the laws of economics or psychology or just plain common sense) but is not really important to the story as a whole. Bond movies are generally action-driven, not science-driven, but they do feature occasional improbable but technically possible devices (space lasers, for example); Arnie movies and other action films tend to be similar.

Tolkien's world is undoubtedly the highest of high fantasy, especially the Silmarillion. The world fundamentally runs on magic - the plot could not be told without it, and the breaking of physical laws is used deliberately to that effect. The only thing that could exceed it is true mythology.

As with hard sci-fi, this label applies really only to the extremes. Other fantasy uses far more mundane settings with much more limited impacts of magical thinking : most of the characters in Dracula, for instance, are entirely non-magical. The story couldn't really be told without its supernatural elements, but they're far less important than in Middle Earth. Star Wars is undoubtedly a fairy tale in space - not quite as outright impossible as Middle Earth, but still heavily reliant on magic. Heck, it's full of space wizards with magic swords, for heaven's sake.

Dune is more difficult to place. Large aspects are plausible but speculative, but other key factors are entirely magical. And those factors are absolutely essential to the story : Paul's prophetic abilities may be intended as a metaphor, but they could not be easily replaced.

Further down the quadrant we get Marvel. These are fantastically implausible. The speculative element is important in some ways, but the main feature is lots of hot people dealing out vast amounts of property damage with hilarious witticisms, none of which makes a lick of sense but is enormously entertaining. 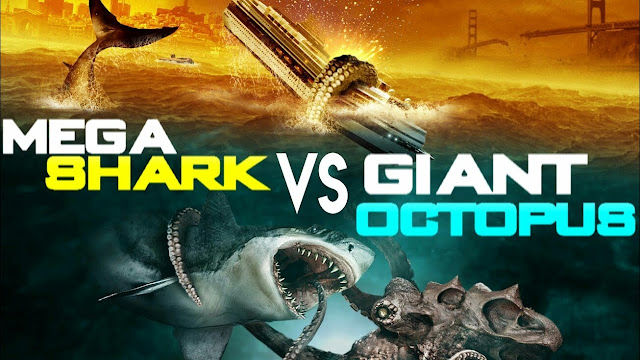 Sometimes you need to stop caring. The Asylum movies are brilliant examples of this, being (deliberately) hilariously stupid. Few others go to such extremes, at least not on purpose, and if any section of the chart is biased towards bad content (or at least away from serious content) it's this one. When you don't care about plausibility or importance, you're less likely to care about anything else.

Of course, good and bad content can be found all over the chart. A hard sci-fi that's badly explained (e.g. The Expanse) is no use to anyone. A high fantasy that's based on defeating the Dark Lord by shoving an enchanted hamster up his backside would be unlikely to ever be taken seriously. But equally, just because something is intended as pure entertainment doesn't mean it isn't worth watching.

So, in much less time than usual, that's it. We haven't learned a damn thing of any use, except that now there's something to rant about that will irritate lots of people that doesn't involve talking about politics. And surely that alone makes it all worthwhile.