What's that you say ? A new show on the Sy Fy channel ? Yes, I'm sure that will have all the wit and sagacity we've come to expect from the network that brought us Mega Shark vs Giant Octopus. 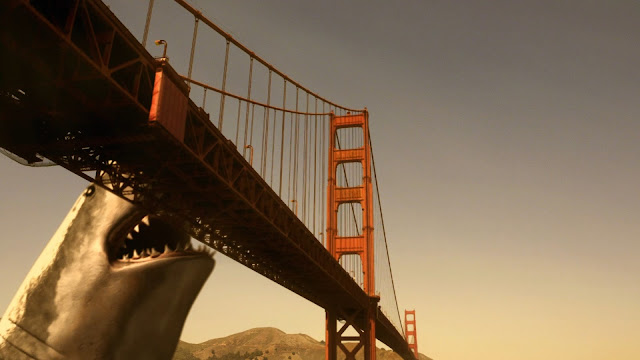 Now, I'm quite a fan of movies by The Asylum, who have honed the art of sheer ridiculousness into something like... well, nothing, really. Because when you're as ridiculous as a tornado full of sharks, the only thing you can be as ridiculous as is yourself. 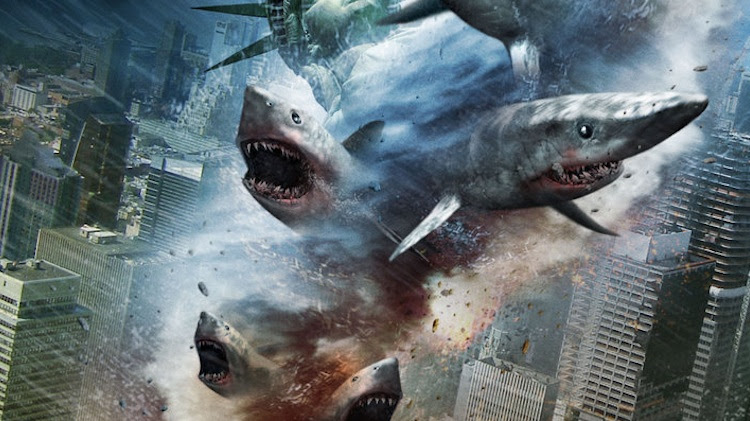 The Expanse is not like that. Oh my no. This is easily the best thing the network has produced since Battlestar Galactica, and unlike that show it has no small claim to be an actual sci-fi piece instead of a political commentary.

Having heard a lot of hype (but carefully avoiding spoilers) I was rather put out by the angst-ridden tone of the first couple of episodes. I mean what the hell is it with making everything gloomy-doomy these days ? Angsty superheroes are just as bad. Dude, you've got lasers for eyes, enjoy it ! It's the same with giant spaceships. "Oh woe is me, this interstellar voyage is worse than having to crush a puppy with my fists." Can it, losers. I want optimism back again. Yes alright, I suppose Batman is supposed to be full of crippling emotional problems, but there seems to a weird fetish for bleakness porn. MOOOAR BLEAKNESS is the order of the day, it seems. Everything must be bleakity bleakity bleak bleak bleak.


Battlestar Galactica was about the downfall of a highly advanced, seemingly near-utopian society. Stargate Universe was... well it was dreadful, but what it was about was a crew trapped on a far-flung spaceship. But The Expanse is bleak in another way altogether.

Set 200 years in the future, the Solar System has been colonised. The two main powers, Earth and Mars, have grown fat off the products of asteroid mining. Mars has even developed to a level to rival Earth itself. But the residents of the asteroid belt ("belters") are cruelly exploited and oppressed to a level approaching slavery by their more powerful overlords. It's not an exceptional event or an isolated crew : an entire society, millions strong, has been deliberately abused over the course of centuries. And they're not very happy about that. They've even developed something like South African accents as a form of protest, for some reason. 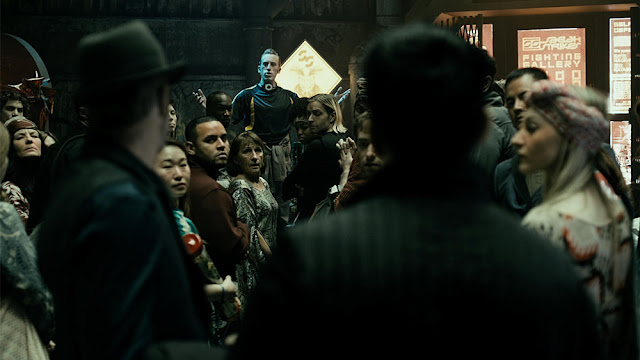 The naturally-angst ridden tone does not sit well with me for a good many reasons. First, we've had more than enough of that sort of thing anyway. Narratively it's just not very interesting. Secondly, it's just transporting contemporary politics into another environment, and there's only so many times you can make that trick work. The fact that the resources of the asteroid belt alone are nearly limitless has apparently had little or no effect of the structure of society - in fact it's apparently made the wealth gap far worse than it is today. I find this both unlikely and uninspiring. Although there's far more to changing society than simple resources, the show doesn't seem to really understand the sheer magnitude of the wealth of the asteroid belt.

There are some other sci-fi oddities - most notably, a near-total lack of artificial intelligence. Besides the scale of the spaceships (which are beautifully epic), most tech feels like it's at most 50 years ahead of current, not 200. They have glass smartphones and some neat cybernetic implants, but that's about it. Oh, and some crude holographics and a natural language interface for computers. There's a complete and very distinct lack of robots - let alone thinking machines - which is all the more surprising given how much better it would be for everyone instead of slavery. 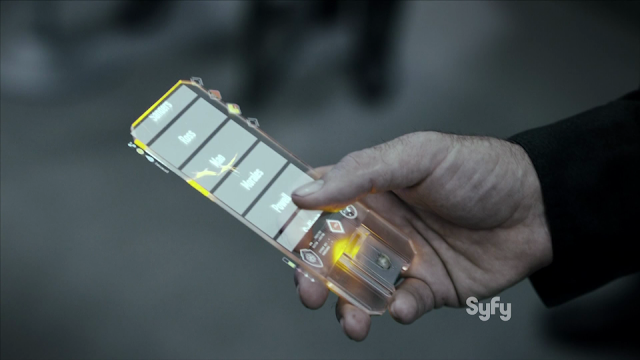 It's understandable that sci-fi so often omits AI and robots, because the consequences are truly beyond imagining. Star Trek had it that true AI is just too difficult to develop; Dune went so far as to have the Butlerian Jihad - a war against the thinking machines (many decades before Terminator came along). Still, given the recent rapid development in those fields, it would be nice to see someone at least try.

Probably the worst plot hole of the show is the focus on the scarcity of water for the belters. They make their living mining ice for rocket fuel (perfectly sensible), but water is somehow more precious than gold. I'm told that the water shortage is a stand-in for more complex plots described in the novel, but it doesn't really help.

Such adaptation problems are seen in other ways. In particular, a large part of the story takes place on the asteroid Ceres. Ceres today is just about large enough to have significant (but very low) gravity, so it's rather nice to see birds flapping around lazily. But then we see a detective threatening to throw someone out of an airlock in the floor. We see him pour whisky and it flows at a jaunty angle, which is not something that happens in a low gravity field. By itself, low gravity just slows things down. 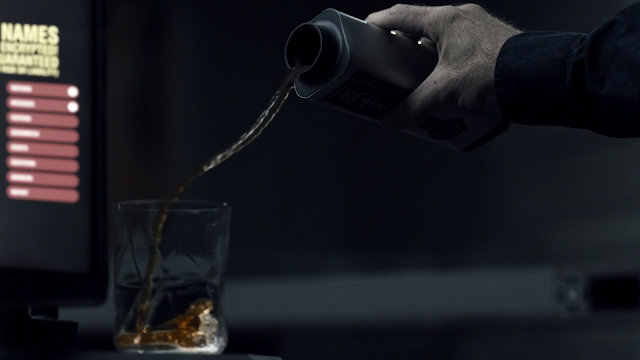 It turns out that this is because Ceres has been spun-up to provide a much higher gravity. Like living in a fairground ride, everyone is walking around inside a giant cylinder. Which explains why the airlocks are on the "floor". The weird whisky pour occurs because of a very strong coriolis effect, which really is what would happen in a spinning habitat.

The problem isn't that they got the science right, it's that they completely failed to explain what the hell is going on to the audience. Until I was told what was happening, I was convinced the scene must have somehow shifted to a spaceship and the writers just forgot to tell me. So I was thinking that their storytelling abilities were considerably worse than they actually are.

Which is not to say that the storytelling abilities are particularly great. They aren't. The plot isn't that complicated, but it's told in a confusing and convoluted way. After the whole ten episodes, I think I can remember the names of two or three characters. Other than that I'm relying on mental labels. "Hat guy", "unimportant sidekick", "I wish I was Grand Moff Tarkin", "angry sinister woman", "nice guy with a beard", and of course "not Jayne". The story they're trying to tell isn't a bad one - it's nothing revolutionary but that's OK - but it feels like it needs another three or four episodes to explain things properly.

Then there are the characters themselves. Meeeeeh. I just don't like any of them. I suppose Angry Sinister Woman is interestingly morally ambiguous, and Hat Guy not only has a hat (which everyone comments on) but also ridiculous hair (which for some reason no-one ever mentions, presumably because of the hat). My word, that's two distinguishing traits - good job team ! Not Jayne is exactly Jayne from Firefly if he wasn't funny. Which describes the rest of the show pretty well too.

At this point you'd be forgiven for thinking I hate the show. I do not. While it has some pretty serious flaws, it's also got a lot going for it. In fact it's almost worth watching for the visuals alone, which are among the best television has to offer. The special effects are genuinely special, and wouldn't look out of place in a Hollywood blockbuster except that the accuracy is orders of magnitude better than anything Hollywood's come up with. Not just the CGI but the attention to detail on the props as well. The cinematography is near perfect - almost as good as War & Peace. In fact as an overall visual treat, I'd have to say this is second to none. 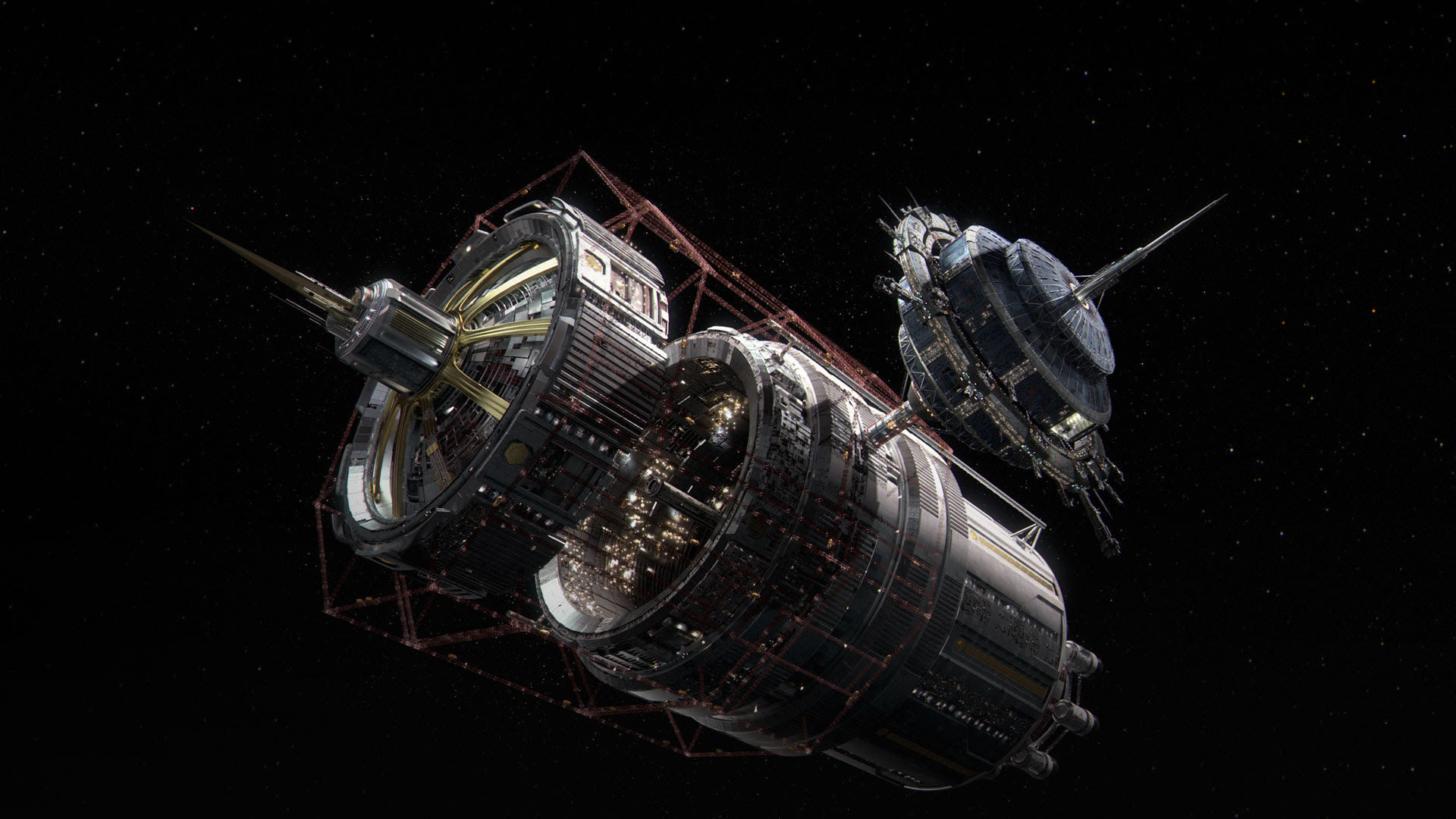 The scientific accuracy also deserves gushing praise. It could very well be the most accurate show ever produced. Ships and stations either have rotational gravity, or artificial gravity produced by acceleration. Scenes with zero-g when the ships aren't accelerating are common, though sometimes they use magnetic boots. The writers understand conservation of momentum and Newton's 3rd law of motion. Ships don't always point in the direction they're travelling. The coriolis effect is visible inside rotating stations. Astronauts don't explode if they're exposed to vacuum for a few seconds. And almost none of this accuracy at any time ever feels like it's made the show worse*.

* The major exception being Ceres, and one occasion where an astronaut opens his helmet to remove something for no apparent reason.

Just about the only element of handwavium I spotted was that ships seem to be accelerating for awfully long periods. This isn't prohibited by the laws of physics, it's just damned hard to do. I can certainly forgive them this, and anyway mimicking low gravity is technically challenging to depict. So not perfect, but as close to perfect as we're ever likely to see in a sci-fi show.

Then there's the plot. Sure, the storytelling isn't great, but the plotline is engaging enough to make this a thoroughly worthy binge watch. Without giving spoilers, it's mostly pure politics - but with just enough of more classical sci-fi elements to make this a genuine piece of science fiction. I would have liked a more rounded-off conclusion to the series though, and the next one isn't coming until 2017.


All in all, I'm tempted to label The Expanse as something of a broken masterpiece. It's certainly persuaded me that bleak sci-fi is still worth watching, whereas Interstellar had me thinking that it's had its day. I would still prefer something more optimistic though. And the characters really are just not good enough, frankly. Making people angsty and mopey and morally ambiguous does not automatically make them realistic. Real people tend to be funny and at least some of them are likeable. They're not all different types of assholes.

Technically, the show is an absolute triumph. You won't find a prettier piece of sci-fi in this decade, nor are you likely to find a more accurate show in the last... well, possibly ever. Yet I'd trade that in a heartbeat for some better storytelling. It's not bad, exactly... it just doesn't have anything particularly noteworthy. Which won't stop me from buying the blu-ray box set and, possibly, the novels.
Posted by Rhysy at Friday, March 25, 2016