You'll Have Your Eye Out With That 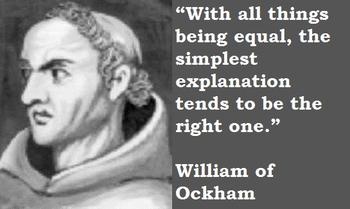 William of Ockham said no such thing. Jodie Foster said it in Contact, but then, Jodie Foster discovered aliens in Contact by using headphones connected to the Very Large Array.  So perhaps we shouldn't take Jodie Foster in Contact as an unimpeachable scientific authority, if such a thing even exists.

What's now called Occam's Razor has been stated in many different ways throughout history and even in the future : 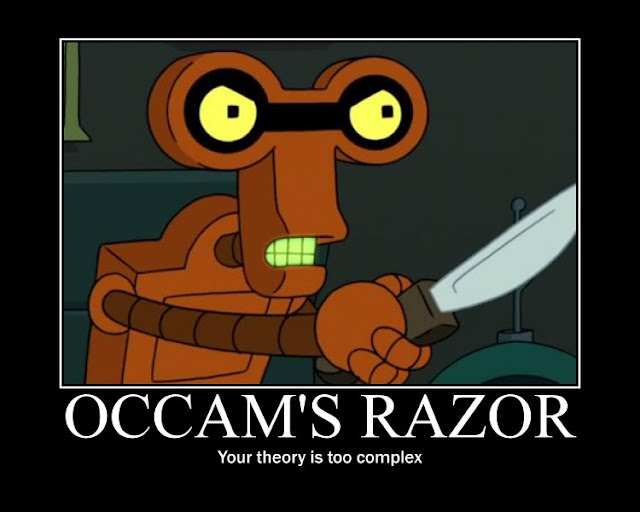 Unfortunately, while "the simplest explanation tends to be the right one" has become much the most popularised version of the Razor it's also, perhaps, the worst version. Like any sharp pointy implement, the Razor is an extremely useful tool but it needs to be properly handled. If you run around with it slashing willy-nilly at complex theories, you will - as mum used to say - have someone's eye out with that.

Alternative phrasings include, but are not limited to :

There's no particular reason to think that the Universe is simple, because it blatantly isn't. Which is something I've explored before, but it's worth re-iterating. Curved spacetime, the relative simultaneity of events and the mass-energy equivalence are not simpler than the idea of a force which depends only on mass. Or to put it another way, this

Don't even get me started on what the terms in the first equation mean, because that's the sort of thing which takes a half-dozen undergraduate modules to properly explain. Anyway, simple is a subjective term. If you live your whole life in a cave, the simplest explanation is that the entire Universe is made of rock. If the Universe was really a simple place, there would be just four elements, bacteria wouldn't exist, illness would be caused by an imbalance of four humours, and the less said about quantum theory the better.

Science is the means by which we can test our intuition about the Universe, not necessarily prove it. There's a rather nice science vs. religion debate in which the inestimable Guy Consolmagno says :

"Poetry is a very powerful way of communicating truths that cannot be communicated in the kind of language found in the owner's manual to fix your Volkswagen. The importance of poetry is precisely because it carries you to into a place that ordinary words can no longer carry you."

He's right, of course. But it's also true of science and mathematics as well - they allow you to explore concepts that your feelings alone cannot. Their real strength comes from the ability not to know what's going on, but to test what's going on. This "tends to be the right one" idea, rather than expounding the virtues of the scientific method of examination, actually encourages a deeply prejudiced idea of how the Universe is supposed to behave. The Universe has no compulsion to behave simply at all. It can do whatever the hell it likes, even if that makes not the slightest bit of sense to our infinitesimally small monkey brains. That's why we now think we live in a universe where mass deforms spacetime rather than generating a force.

OK, "tends to be the right one" at least says, "tends", allowing for the fact that not all simple explanations are better. But even this isn't really good enough, because simple explanations usually tend to be wrong. This is every bit as true in philosophy and morality as it is in science.

There's another, bigger problem with "the right one". Pretty much all scientific theories get overturned eventually, though sometimes that takes centuries. Supposing that your theory is not merely true but also complete is a dangerous way to fall into the trap of dogmatic thinking. Or, as this rather nice article puts it :


Then there’s the “cognitive fluency” of a statement – essentially, whether it tells a good, coherent story that is simple to imagine. “If something feels smooth and easy to process, then our default is to expect things to be true,” says Newman. This is particularly true if a myth easily fits with our expectations. “It has to be sticky – a nugget or soundbite that links to what you know, and reaffirms your beliefs,” agrees Stephan Lewandowsky at the University of Bristol in the UK, whose work has examined the psychology of climate change deniers.

A simple idea can be seductive - especially if it's consistent with other ideas. A complex idea that goes against existing notions is generally a hard sell, but that's not by itself a reason to discount it. Newton's theory of gravity had astonishing success, but failed to predict the orbit of Mercury quite correctly. One simple explanation was that there was another planet even close to the Sun. The alternative was Einstein's massively more difficult model. But Vulcan was never found, and Einstein eventually won the day.

And yet simplicity has a powerful virtue. Consider the alternative of the most complicated explanation. Ten thousand years ago, one might have said that the Earth is either flat or round. Flat because it just looks flat, and round because things disappear over the horizon. The test of seeing a ship's hull disappear before the mast does wasn't available because no-one had ships large enough to do this. There was really very little reason to suppose the Earth was round, and one huge overwhelming reason to suppose it was flat. Without telescopes and large moveable vehicles, that things disappear over the horizon could easily be dismissed as things looking smaller at larger distances.

Ten thousand years later and the tables have completely turned. Whereas once you'd have had to come up with all manner of crazy explanations for a round Earth, now the opposite is true. Amongst other things, you have to assume that all of NASA and a host of multi-national space organisations are lying and that a huge military force prevents anyone from getting near the edge of the planet. With enough complexity, any explanation - no matter how stupid - can be made to work. 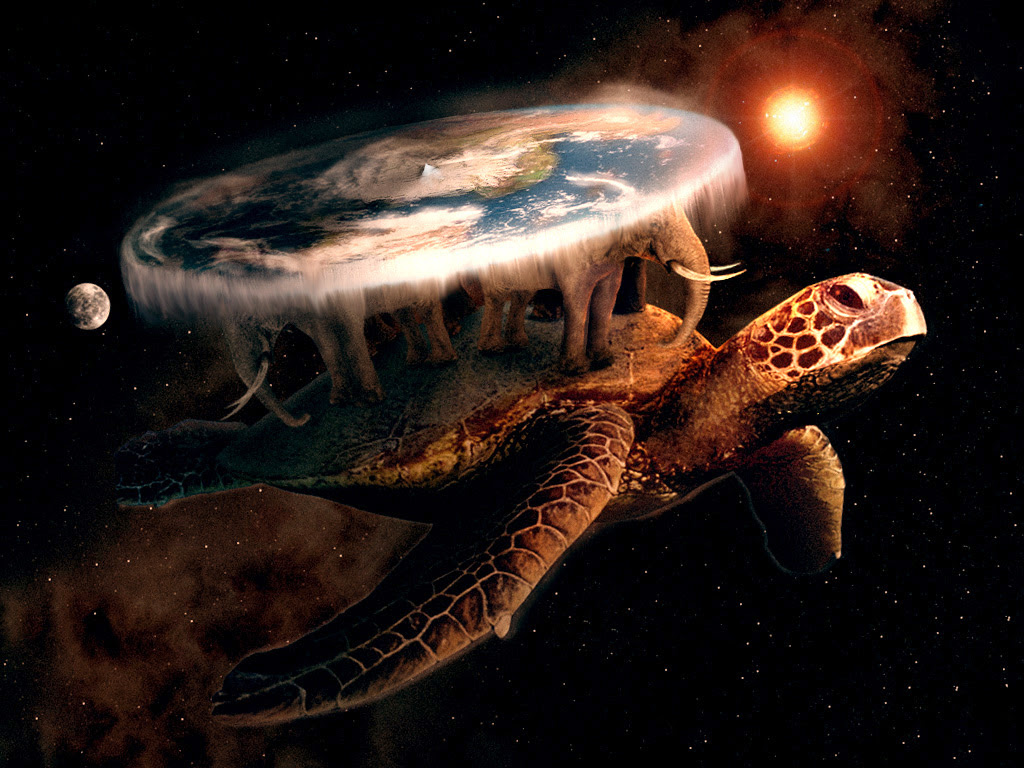 Not for the first or last time will I use the von Neumann quote : "With four free parameters I can fit an elephant; with five I can make him wiggle his trunk." Complicated theories are much harder to test, because the more explanations you can invoke, the more unexpected discoveries you can account for. Which can be used to tremendous comic effect if you're John Cleese.


A key point in the alternative formulations of the Razor that Jodie Foster's misses completely is, "without necessity". If your idea is simple and works, you should, as a rule, prefer it to a more complicated one which also works. Einstein's theory won in part because there was just no way to make Newton's model work at all. Einstein's mathematical nightmare was invoked by necessity, not because he thought it might be good for a laugh.

All things being equal, then, we should prefer simple theories because they're generally easier to test and disprove. Otherwise, like Basil Fawlty's elaborate lies, we can usually contrive some solution to keep a theory alive along after it should have been roasted on a spit and eaten. But when things are not equal, we should prefer the theory that performs best. If a more complex model gets things right that a simple one doesn't, then we have to spit on the simple one in disgust and go for the complicated one instead.

Occam's Razor is not a license to go around slashing theories you don't like because they're complicated. It's more like an electric razor that has those safety guards that prevent you from ripping yourself into a bloody mess - you should try and remove unnecessary body hair, but you wouldn't use it on your scalp. You probably want to keep that hair.... well, mostly. 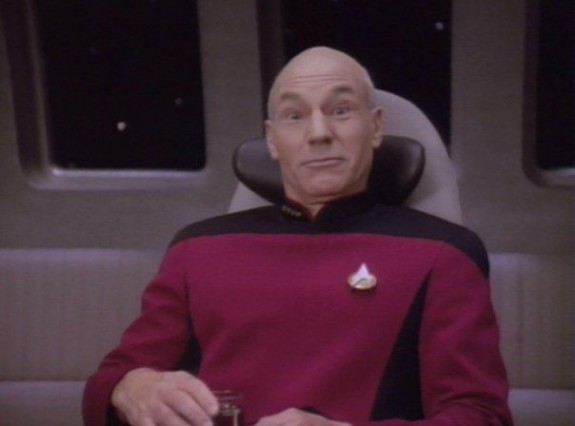 The Razor should be treated more like a pair of hedge trimmers : used properly and carefully, it's very powerful. Ultimately it's more of a guideline than a rule. In its most concise form it might be phrased as, "prefer simple explanations". "Prefer", of course, does not mean, "insist upon". A slightly more pragmatic version might be, "test the simplest explanation first". The ultimate truth is rarely revealed to us - science is, like topiary, a process of improvement, but rarely sudden breakthroughs. Start with the simple explanations not because they're usually right - that's crazy - but only because they're the easiest to test and falsify.

Of course, the Razor is not the only principle we need to do science, otherwise we would indeed be back to "a wizard did it". But used properly, it's a powerful tool. And if all else fails, one can also use Occam's Laser : 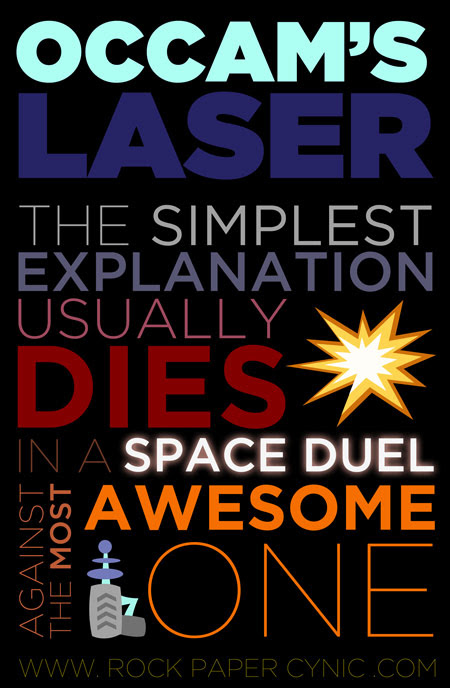 And if that doesn't help, there's always Occam's Taser : 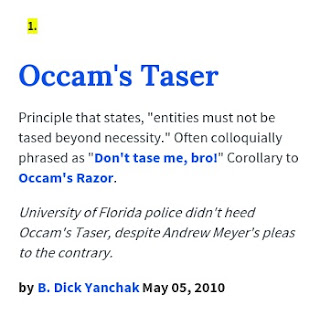